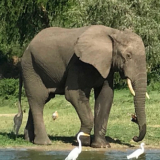 RockySoil 225 replies2 threads Junior Member
May 28 in Athletic Recruits
Brown just announced that it is downgrading Fencing, Squash, Men's T&F, and others to club status.

Here is an excerpt from the announcement: