Historical perspective on the role of sports (particularly football) at Harvard 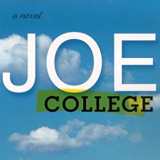 Replies to: Historical perspective on the role of sports (particularly football) at Harvard