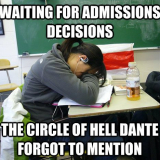 21stParent 95 replies2 threads Junior Member
December 2018 edited December 2018 in Musical Theater Major
I am overwhelmed and I would rather not go into all the circumstances/details as to why we are late applying for musical theatre programs for colleges for my son for Fall 2019. If knowledgable people could just rally around this incredibly stressed parent with their best recommendations for Musical Theatre Major and Minors (or the freedom to take high level lessons/classes) in Piano & Voice Performance) that have deadlines that have not passed. That would be incredibly helpful and thank you in advance to anyone who takes time out of their day to help us.

I will try to include details about my son that will give you insight as to his preferences & background:

He has a extensive background/proficiency in piano, plays several instruments and has a pretty strong, in pitch, well controlled, good range, tenor voice, even though it is still developing. ( I will put my opinion here and say his voice has become really beautiful after starting out really rough, so don't let anyone discourage you if you have a love for singing and the dedication to work at it.)

He sight reads piano but it is not at the level to, seamlessly, play anything in front of him, however that is his goal. He can sight read and sing on the spot, though.

He had been junior musical director for his high school contemporary band and he would listen to a song and pick out and write out the different parts for his band mates to play.

He understands music theory and explains to me why I love how certain parts of songs sound!

He has a 4.0 unweighted and 4.08 weighted gpa, and his class rank is 6 of 106, as of end of junior year.
He has a 1300 SAT score, 650 in math and 650 in English.
He has not taken AP courses.
He has taken Honors Precalculus, and Honors Calculus.
He has taken A-G 11th grade English, A-G Biology and A-G United States Government.
He has been fortunate that he has been able to take Musical Theatre, Drama, Music Composition, Voice and Piano class/lessons at his school and some outside his school.
He likes to sing and play, broadway, jazz r&b, soul and classical, prefers real instruments and dislikes synthetic/dj/repetetive music.
He has not taken any dance classes, yet, but was able to be instructed and perform adequately in a local musical, even if he felt he was slower than most in picking up choreography.

He truly wants to be a musical theatre major but can't imagine not training in piano, as well or even having access to pianos to play daily. He has had lead, featured and ensemble roles in musical theatre in both his school and community theatre and loves the atmosphere and the experience and the friends he makes. He has also restored, arranged the music, added harmonies and was hired as the musical director and accompanist for a musical revival put on by community theatre. As musical director he had to work with all ages and garnered their respect. He has this understanding of music and a drive to pursue it that seems to be beyond his 16 years. Certain teachers/friends have complimented him and say he is already a professional musician and they want to see him at Juilliard but even if somehow he were amongst the select few that were accepted, Juilliard does not have a musical theatre major/program and he has discovered a love for Musical Theatre that won't be denied.

I am sorry if this is coming off as bragging, as that is truly not my intention, but he really seems gifted musically and I just want him to get into the right school for him, where he can continue to thrive, make friends, make the most of his gifts, follow his interests and just be happy while he works towards a successful future in what he loves. I just feel ill equipped to figure all this out especially now being all too aware that some musical theatre application dates have passed and some are fast approaching. I have researched, read tons and taken notes and tried to figure out what schools are best but it is just such an unfamiliar, intimidating and worrisome process for me. I just learned about college coaches but we won't be able to do that.

Somehow his brain is wired for music now and that comes naturally to him but he's had some concentration and other issues come up this last year that make him feel he is not able to deal with many general education courses. ( I know that is controversial but he has decided he truly does not want to apply to a school with too much core curriculum. ) So any input in that area would be extremely helpful, as well.

Just read about cuts and while I know my son works hard and I can't imagine him cut for slacking, it scares me to think of a school cutting him because they overaccepted for their freshman class. The very idea of that makes my heart hurt and I certainly don't want to go thru this process again so please don't recommend (or warn me about) schools that have that reputation.

Just recently learned about prescreen dates, as well, not even sure I fully understand what they are.

Again, thanks anyone who has the knowledge and is willing to share with some ideas/lists/spreadsheet for us. Hopefully in future I can return the favor and contribute to this forum what we learn from this experience.