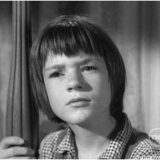 scout59 3723 replies69 threads Senior Member
May 2019 in Parent Cafe
Just saw that Bart Starr has died at the age of 85. What a humble, classy guy.

Replies to: Bart Starr has died