Are you an Empath??? 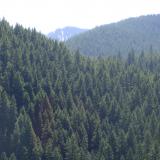 Replies to: Are you an Empath???