I couldn’t find the old thread so thought it’s time to start a fresh new one.
Wedding late October 2021. Time of day 4-10 pm. Venue ceremony outside/reception indoors. Might need to be able to walk a few blocks between the two.
Bride wants me to wear long. I want to be able to wear nice but comfortable shoes. Most have in the dress - my back covered. I can get away with sleeveless and low cut but my back is my feature I don’t like. (Irish sun damaged skin)
I don’t look good in pastels or dusty colors. I like navy, burgundy or even a dark green.
Any suggestions

No specific dress suggestions, but I’ll put in a good word for Nordstrom. I ordered multiple outfits from them to try on at home then returned all but three; one teal and two navy. One was for the rehearsal dinner, one for the ceremony and the third for the reception. The reception outfit could have worked for the ceremony, but it had flowy pants with a gauzy overlay instead of a skirt and D wanted me to wear a long dress for the ceremony. Since I’m short, I looked for dresses described as midi or tea length and they were just right as long gowns.

Another store you might not think of is TJMaxx. I’ve continued to see several long gowns on their website each time I’ve looked. They’re often the same brands and styles that I’ve seen at department stores but at a pretty good discount. Returns are not as convenient as with Nordstrom and there are far fewer choices, but you might get lucky.

Elegant and effortless, this stunning short sleeve evening dress is a gorgeous option for your next special event. This sleek dress features a boat neckline trimmed in beading, a flowing straight skirt, and scalloped art deco beading to dazzle the...

Create a high impact look at your next formal event when you choose this beautiful, beaded evening dress. For that upcoming wedding or gala, this special occasion gown features a blouson bodice, sparkling scalloped beading, and a flowing straight...

This sleeveless, full-length evening gown is made from soft, stretch fabric and boasts a sensational, high-low hemline with waterfall ruffles. An ultra-glamorous design, this gown has an elegant high, halter neck. Lined for a fine fit and finish,...

Gorgeous and glamorous with maximum sparkle, this stunning sequin dress is a stellar option for that upcoming formal event. Attend your next black tie wedding, prom or formal gala in style when you choose this sequin gown, which features a flattering...

@soozievt do you have a side business as a personal shopper? You need to start charging us CCers for your services.

My son was married in October. I wanted a fall dress. As I remember I bought most of the dresses in August when some of the fall stock came out.

I’m a short person and needed a petite. I ordered quite a few dresses lol! All from Nordstrom and Macy’s. Did not like any of the dresses from Macy’s.

The dress I found, I loved so much. I felt very good in it.

@soozievt do you have a side business as a personal shopper? You need to start charging us CCers for your services.

@4kids4us Ha ha ha! NOPE! Here’s the thing…For starters, I shop for my own clothing online. And it can be fun to find things for others who may not have the same style preferences as myself, a different figure, and/or budget. My profession is as an independent college counselor. For that, I have to research colleges that fit a student (among other things) and so these dress searches are sorta another “art of the fit!” It’s almost like a game. I do hope from that assortment (some links don’t show the picture right on the message board and so you have to click 'em), I hope there are some possibilities. At the very least, I hope it gives a sense of what’s out there.

I like a number of the suggestions. Several of the Adrianna Papell. The sleeveless high low with ruffle accents looks nice but I’m not sure about the train. I’ll have to order it and see. I also like the ArtDeco beaded blouson with halter neckline. I like it with the sleeves too. I also like the Guipure Lace Mikado A line from Nordstrom. I’m not sure if it’s too much dress for the venue. I sent those 4 to my D.
I like La Femme but the bra structure in that line just don’t work for my bust shape.
I prefer not to order from Dillard’s as they charge for return shipping.
@soozievt as I e said a few times you are good at this!

@mom60…I’m glad you saw a few possibilities to try out! Update us later!

mom60- You gave some great starting points in terms of what you don’t want and need to have. Do you have a physical feature/features that you prefer highlighted? That can help with the styles.

I really like the navy and deep green colored dresses soozievt shared! They look so elegant.

Is there a particular brand or designer you favor?

Eternally chic and understateda shimmering statement in the softest blush, with a subtle, glimmering, hand-beaded designand a silhouette that fits like a dream. We love it for moms of brides-to-be, and everybody who wants understated elegance.... 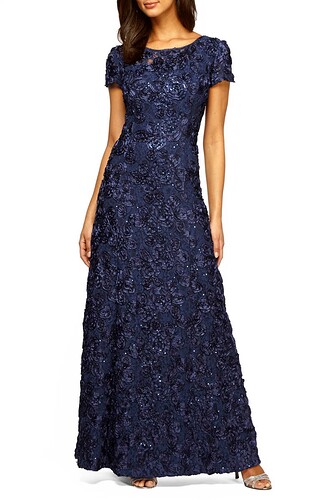 Does this have too low a back? It’s really not that low…and it comes in petite as well as regular lengths. It’s a very comfortable dress! 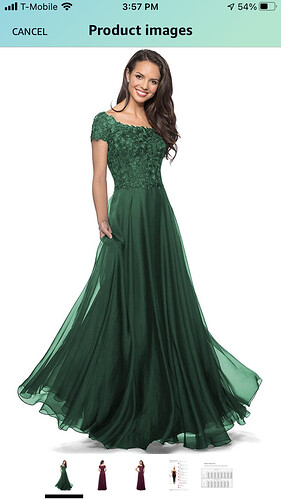 How about this one?

I really like Adrianna Papell dresses, there is a specific MOB/G section and there are usually a wide variety of colors. Really pretty dresses

There are quite a few nice brands — partly it is nice to find a brand/designer and style which seems to fit you well so that you are likely to be able to wear other garments by the same designer and/or similar style.

Gee I guess I out to be looking for a dress too. I will be officiant at D’s buddy’s wedding in April! I suspect she’ll want me to wear a dress and not my judicial robe; in any case dress for reception.

Hmmm, most of the BLDN dresses look pastel or very low neckline or plunging back.