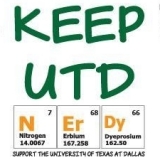 The package is basically a full ride, covering all but $168 dollars and books. It is a great school with a really strong honors college and many academic peers. Also if you consider it, check out the Clark Scholars summer research program and the McDermott Scholars Program.