Also, according to Michigan LSA, “45 LSA programs are among the top 10, and two programs are the best in their fields. As the primary undergraduate college, LSA is the reason U.S. News & World Report ranks U-M as one of the top universities for undergraduate teaching.” 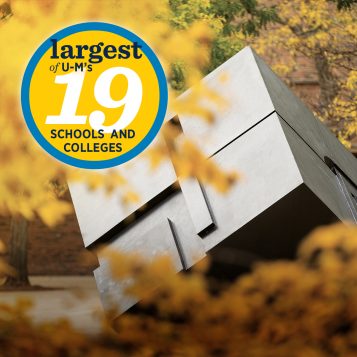 So, your D could throw a dart at dartboard full of LSA majors and probably hit one that’s Top 10 or better.

If UMich is the final destination, I’d just meet with her advisor, plot a course to cross transfer from Taubman to LSA or even CoE, depending on what she wants to do. She will have many distribution (general) courses to take and those all should apply to either Taubman, LSA or CoE. But check with your admissions counselor, before deciding on UMich.

Thank you. She would do that. She is actually very excited about the Urban Tech program. It meshes well with what she sees as her interests short and long term, her worry was ‘what if my interests change and I am stuck in Taubman with no Plan B?’.

One of the other schools she is still considering is Cooper Union (Engineering) and that school’s size and limited choices for majors has made the ‘what if’ game popular here.

Cooper Union is a great school … (at an awesome price

) it slipped a little in ratings in the last 20 years, as they had some issues with financing. But now they seem to have figured things out … and the new building is gorgeous. Would your daughter commute?

At Cooper Union, ideally, she would be on campus for the first year (which is close to guaranteed) and on her own after that. At one point early in the process this was her top choice (before that it was NYU and after that Columbia then Barnard).

I can’t complain about the price. For our family, it works out to about the same as CMU for the first two years (while my daughter’s older brother is in school) . I expect CMU would increase their cost (or, more accurately, reduce the provided aid) after that . . . but I expect off-campus housing near Cooper Union would also add to the bill there, so, for planning purposes the cost is a wash for us. I suspect Michigan will be the most costly. I have not seen an FA package from them yet (my daughter seems to be rationing the information she passes along . . . though I expect it simply that she has no sense of urgency on the matter yet) so I am saying that without any information. Perhaps it is simply my pessimistic nature.

And before Covid, East Village was awesome … (I work across the street from CU),
but unclear how long it’ll take Manhattan to recuperate. Hopefully not long!

I’d say CMU because you will have more personalized experience and access to resources and research. UMich is huge.

can you tell the reasons why Mich is better than CMU

Didn’t say that.
Depends on where and how you got admitted to CMU.
If you are admitted unrestricted to CMU, I’d argue CMU is probably a better destination.
But if you are admitted restricted or not to the school you wanted, or want to add CS courses …
Maybe Michigan would provide more flexibility.

like im p sure CMU allows people of other majors to do cs courses. 45% minor or double major and out of that a lot of people(probs 10%) do it in cs so i dont see the problem in flexibility

are you postulating, or do you have first hand experience?
There were lengthy discussions here on the flexibility of CMU.

I had recently read up on CMU and, for example, a Mech Eng major with a CS and/or Robotics minor seemed quite possible in theory. I am still curious how this has worked out in practice.

My daughter did end up choosing CMU over Michigan and Cooper Union (and others, like Cornell and Binghamton that she was never seriously considering). We visited the campus last weekend and she, apparently, found it acceptable.

She is undecided on a major but MechE or ECE with a CS and/or robotics minor seems a slightly more likely Plan A than something around Civil/Environmental. Hopefully everyone else comes to a clear decision instead of flipping a coin at the last minute as well.

First-hand experience: my child is currently finishing his junior year at CMU. Started out as a math major, pursuing a minor in music technology. Decided to add a CS major in soph year. Switched to CS major, with math minor and music minor. And (pre-covid) he has fun, too.

So yes, it’s not hard to take courses and/or minor across majors and schools. It’s encouraged actually.

@paninialmond what did you choose