Did anyone watch 60 Minutes re Deep Springs College?

I think that would be a good idea.
It would be interesting to see the responses from students who would consider work colleges.
Too often, students seem to think that their lives are over if they don’t get into a top 20 school. Students need to see their peers in various educational settings and options. 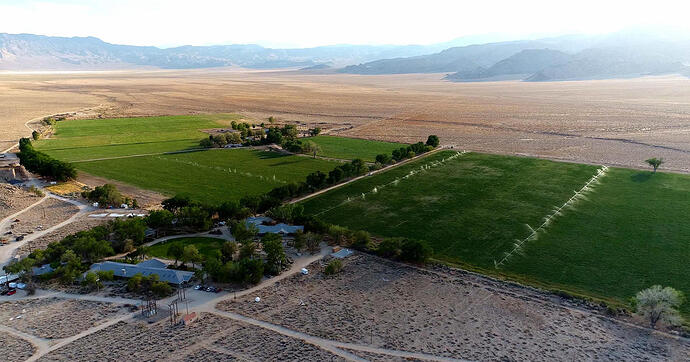 Deep Springs College brings rigorous academics to a ranch in the high...

For two years, students live on a remote ranch in California, where drinking is forbidden and they're required to perform at least 20 hours of labor per week, on top of a full course load.

These two prompts from the DS application ask for the highest word limits:

Which college has the most challenging application? A challenging app will limit applications so it’s not in many colleges’ best interests to discourage apps. Meanwhile, some have cute questions that gain notoriety. For example, I remember Rice asking people to fill a box with whatever comes to mind.

Fantastic. I actually wish all colleges that abandoned supplemental essays would bring them back. They can provide such a great outlet to show creativity, deep thinking, logic, or whatever.

Thanks @tristatecoog for the link to the 60 minutes segment. I just watched it.

Here are my thoughts off the top of my head.

For another perspective on the work college concept here’s a video from several years ago from Warren Wilson that gives a good overview of their mission: Explore Warren Wilson - YouTube Their philosophy is academics, work, and community engagement (service). They call this the Triad. This is a good one too: Work-Learning-Service at Warren Wilson College - YouTube

(They also have a farm and raise cattle and have a cattle drive to move them to other pastures, although they don’t do it on horseback. Asheville Traffic Jam - YouTube )

FWIW As a side note: If I lived on a ranch in a remote location where the participants are responsible for “growing” all of their own food, I would become a strict vegetarian immediately.

Are the Deep Springs students responsible for providing all of their own food ?

Are the Deep Springs students responsible for providing all of their own food ?

Apparently, they sell hay and cattle for “modest income” but pigs, broiler chickens, and laying hens are raised for consumption at the college.

Apparently, they sell hay and cattle for “modest income” but pigs, broiler chickens, and laying hens are raised for consumption at the college.

Do they slaughter the pigs and butcher them themselves? Seems unlikely, but who knows?

At Warren Wilson they eat what they grow both meat and veg although their farm doesn’t supply all the needs for campus. (They don’t grow coffee!). They don’t process the meat on site and say, “Our hogs are processed at a local facility that we trust to do the job right.” I assume the same for the cattle and sheep and chickens. But they do have an on-campus farmer’s market and a CSA. I think if my D22 goes to WWC (it’s her number one right now) she will be eating a lot at the student run vegan cafe!

Apparently they slaughter as well.

The labor pillar at DS seems to be challenged more than any other. Is 20 hours a week of “hard labor” the right amount? Too much or too little? Is the purpose to have enough labor so that the farm is self-sustaining? 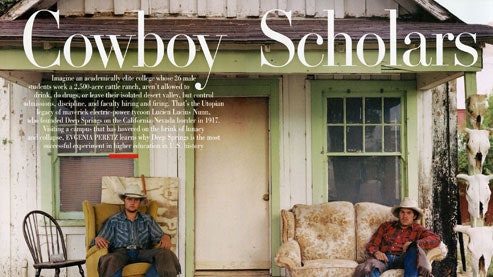 Imagine an academically elite college whose 26 male students work a 2,500-acre cattle ranch, aren’t allowed to drink, do drugs, or leave their isolated desert valley, but control admissions, discipline, and faculty hiring and firing. That’s the...

As Josh Hudelson prepares to leave Deep Springs College and head to Columbia University as an anthropology major, there are a few things he is taking care of—among them, slaughtering a cow and spending the night with the corpse in a 40-degree meat locker. “I was worried it was airtight and I was going to suffocate, so I had people check on me throughout the night,” he says cheerily. “It was kind of enjoyable.”