@Texas231343 Top tier law schools do not like to take students straight out of undergrad. It’s called KJD. About 80% of the students entering first year law school in the top 6 law schools have some work experience. Even after the hurdle of gaining law school admission, there’s the issue of getting a job. Law firms are less likely to hire a 21 year old associate than someone who is older.

Certainly aim for law school, but don’t feel that you have to rush towards it.

Oh, I didn’t see that. I only saw the beginning post.

Another key is all that college credit which is accepted at your public option.

You are very, very young for college. While a dream to become a lawyer when you’re 8 is wonderful, especially when you can carry it out, college is an opportunity to find yourself. MAKE SURE going to law school is really what you want to do. I would keep a very open mind.

That being said, to answer your question, it’s a no-brainer. A free ride to college vs. paying a fortune to go to UChicago? Undoubtedly, I would suggest, as most everyone here has, to take the state school at no cost.

Prestige matters to some, but the more it matters to them, the less I respect their wisdom. The world is full of outstanding people who didn’t go to Top 20 schools and who did. It is what you make out of it. The top students at a state school will very likely be a top student at any school.

You are obviously extremely academically gifted and seem very mature. Go to the state school, do well, have a great time (within reason), and keep your mind open to all your options, whether it’s law, etc. You will learn a tremendous amount in the next few years, about the world and about you.

All the very best wishes to you!

A 14 year old who was accepted EA to UChicago has a whole lot going for her/him out the gate- and is likely to be able to stand out wherever they land. I would be more concerned about the OP being in a place where s/he can grow into themselves as a person- kids who are academically hyper-able at a young age very often struggle with balancing out the internal growth we all have to do.

Graduating from college at 19 or 20, with $100K in debt, the OP is then competing with 22 year olds for jobs, with the prospect of a further $200-$300K in further debt for law school. As an indicator of the challenges of that path, here is a recent ABA report on debt & young(ish) lawyers: 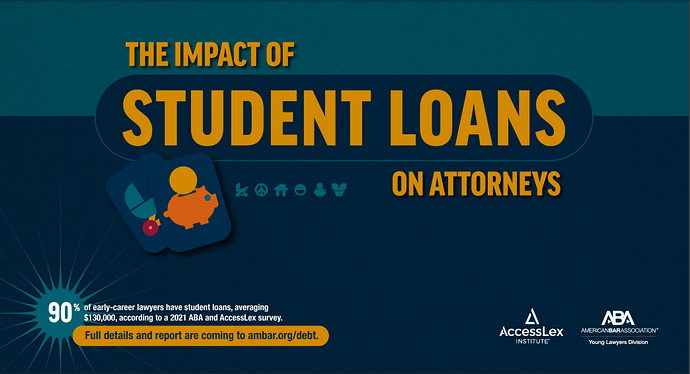 tl;dr- a kid who can get into UChic at 14 will be able to be the kind of star at state college that will get them into whatever grad school they want when the time comes. Sooner or later borrowed money has to be paid back- and $100K is a heavy burden to throw on a young back.

The state school is located 2 hours away from us while uchicago is more like 13 hours away. I’ve been leaning towards the state school anyway – it is just that a lot of people make the “prestige” sound alluring.

I mean could I, I think I could: you can always take out more loans – would it be a sound financial decision – probably not.

Thank you so much! I have been leaning towards the state school as well for several reasons besides financials (including that I don’t reallly feel comfortable in Chicago by myself and neither do my parents)! The only thing holding me back from fully making the choice is the people who make the prestige sound so alluring.

you can always take out more loans

Well, not exactly: for UG, you (vs your parents) are only allowed to take out ~$27K. Your parents would have to take out the rest.

For grad school, you can take out quite astonishing loans - esp with a name-brand law school- but as you noted it would be a problematic financial decision.

I have been leaning towards the state school as well for several reasons besides financials (including that I don’t reallly feel comfortable in Chicago by myself and neither do my parents)! The only thing holding me back from fully making the choice is the people who make the prestige sound so alluring.

For all of the reasons mentioned by other posters and, in this case, the fact that UChicago is surrounded by high crime/dangerous neighborhoods (FWIW, I wouldn’t allow my D22 to go there), going to the state school makes great sense.

Given your impressive achievements, I am confident that you’ll have another opportunity to attend a highly prestigious graduate school.

In the current times, there are no advantages to skip grades, graduate early and start careers early. Those lost years hurt people in so many ways.

Why are “current times” different? There’s always been risk in skipping grades and graduating early. Sometimes it works out and sometimes it doesn’t. But there are undoubtedly people who haven’t been “hurt” at all in their careers, and have arguably been helped by having the time to explore different opportunities. Two good examples are Ronan Farrow and Eugene Volokh (who both did law degrees and achieved astonishing success).

Let’s focus on OP, and not go OT. Since in the OP’s case, it’s moot. He is graduating HS this year, so cannot unskip grades.

Whether or not he is a viable candidate for law school at 18 is a question he can come back and ask in a few years’ time.

On the prestige factor, I have grown increasingly cynical about that. I used to think Ivies/Top 20 schools were the only worthwhile thing; but, I don’t anymore.

I am a lawyer myself, but it has been some decades since I applied to law school. I am not the best-placed to answer this. However, I have observed from multiple postings from well-respected and very knowledgeable CCers that law schools focus on grades and LSAT scores rather than where a candidate went to school. If that is indeed the case (and I think you can find these links fairly easily), that just amplifies the wisdom in attending a state school, as you are not saddled with debt.

P.S. While I hated the first year of law school, I grew enchanted with the law after my first summer clerkship. I had a great mentor who is still a friend today. Becoming a lawyer was the best academic choice I made, as I love doing it even after all these decades. May you too find your dreams come true!

You definitely do not want to rack up six figures of debt before you even start law school. Law school is very expensive, and employment statistics for new law school grads are not so great that paying back loans with ease can be counted upon. Do you want to work your butt off in school for seven years, only to end up shackled to a job you hate because of student debt? UChicago is not worth big debt like that; plus, as others have noted, you could potentially end up in a worse position for law school admissions because of how hard it is to get a high GPA there.

Have you considered doing a gap year program, such as a “super-senior” post-grad year of high school abroad through AFS? Many overseas high schools have plenty of advanced coursework that would enable to you be challenged in college-level classes, but you’d get another year with peers your age and acquire valuable, broadening life experience that would enhance your record for law school admissions as well.

Just as an opposite view point, I let my DD go to UChicago at the age of 17. She had a great education. She is now in grad school at Johns Hopkins; another “scary” school area. Fear is not a good thing to take with you to college, being smart and aware is. It’s far more likely for a college student to die in an alchol related incident then being a victim of a crime.

Reasonable people can certainly disagree. We live in one of the largest, most diverse cities in the world and my D22 is out and about everyday - so she’s not living in a cocoon. But level of violence in the areas surrounding UChicago is at a whole different level (I know Chicago very well, having lived there and also visited frequently on business) - with so many good universities around, I feel it is not smart to unnecessarily expose yourself to such hazards.

Here are some headlines from the ABC7 (Chicago) website over the past 2 weeks:

In particular: “A 17-year-old boy was struck by gunfire Saturday afternoon in Hyde Park on the South Side. The teen boy was on the sidewalk about 2:20 p.m. in the 5600-block of South Woodlawn Avenue when a dark vehicle pulled up and someone from inside fired shots, police said.”

5600 block of South Woodlawn Avenue is 2 blocks from UChicago campus.

You might be comfortable with this but I’d prefer to avoid it.

…and none of those where anywhere near UChicago campus, but like I have said before, I and my DD have always been more prone to take risks.

Rather than continuing to debate, let’s assume that an almost 15-year-old senior knows how to use a search engine and can read one of the dozen or so threads on the safety of Hyde Park.

The days of grade deflation at UChicago are long gone. My wife attended there in the 1990s, and we know several people who are current students. I would not let that deter you. While the STEM programs at Chicago are still very difficult, there are some majors which are much more grade friendly.

If you think its possible to graduate from UChicago with a high GPA, and you can get a high LSAT, and you want to go to an elite law school, then you’re better off at Chicago. Graduating with top stats from Chicago will be better than top stats at state school. Unlike many other professions, lawyers focus heavily on prestige of the law school. Getting a top job at Big Law will mean you need to either be law review, or graduate from a top 10 law school.

But if you don’t think you can get a good GPA at Chicago, then all things being equal, I would take the money and crush it at state school.

Chicago would be better if you have any interest towards a career in high finance (IB, consulting, etc).