Help suggest some US schools for son's largely foreign list

We didn’t have it on the list because the tuition is quite a bit higher, and we’re trying to focus on schools that are likely to be affordable.

You might want to look at how expensive it is to be on the racing team too when comparing costs. I see a lot of people on CC talking about club sports or doing expensive ECs, and if those activities are important to your student the costs should be included in the comparison. I know at some schools the club sports teams can cost $5k+ At my daughter’s school there was a Jet car team that was sponsored, but quite an expensive EC because of all the travel (some not covered).

Good point! I don’t know how much the students contribute to the costs of these race car teams, it might vary from school to school and we should find out. We do have a column in our spreadsheet for how difficult it is to join the race car team (do they take everyone who is willing to work, or do they only open a few slots at a time with a complex application process, etc). As you can see, this is an important feature!

Yes, the international tuition at U of T is about twice that of McGill’s! Something to keep in mind as well: Montreal rent is much more affordable than the rent in Vancouver or Toronto. It’s not unheard of for students in Vancouver (after first year) to end up living an hour away and commuting by bus, as the campus is a little isolated; U of T’s St. George campus is more centrally located, so though the rents in Toronto are still high, it’s not as hard to get to class because the public transportation is more extensive.

For UBC, which neighborhoods do students typically live in after the first year? Or are they scattered everywhere? We are visiting next month, but I know it’s difficult to get a realistic picture of student life since we aren’t visiting during the school year. It would be good to visit typical student neighborhoods.

Have you considered Western University (University of Western Ontario), which has a PPE degree? It’s in London, Ontario, a mid-sized city of about 500K people.

I will second @Delly’s recommendation of UWO/Western (though I admit to being a bit biased as I am an alumn lol - see my avatar pic). UWO is the “western Ontario” equivalent of Queen’s which is in a similar sized city (Kingston) but to the east (near Ottawa).

Traditionally both schools are known for their work hard/(very) party hard cultures and tend to to be favourite choices for students from the wealthy private high schools (which are generally not that common here in Canada so they don’t make up a large part of the student body). Both schools are academically selective and are well regarded. As they are not located in major metropolitan centres they tend to be less multiculturally diverse (though that is changing) and are majority residential campuses (though it is typical for students to move off campus after first year into leased housing in the neighbourhoods surrounding campus). They both have active campuses with a wide variety of social activities available.

Full-length tests can be helpful study tools-- this student should definitely review his misses on his first actual test and look for patterns in the topics, question types, and where in the test they occurred. While I’d agree he should take another practice test within the next month, I don’t think it necessarily needs to be the first thing he does to start studying (especially since it sounds like he’s occupied with summer activities and may not have 3 hours to sit for a full test right away).

I say that because, if the student doesn’t yet have a baseline familiarity with the key concepts & strategies that are tested on each section of the test, it’s often difficult for them to look at their results for a full test and parse out what they need to focus on (something a tutor would be able to do easily). While the SAT Question & Answer Service does sort questions into subscore topics, they’re often too general too be much help – i.e. knowing you missed 10 “Standard English Conventions” questions doesn’t tell you which conventions to study!

Any decent test prep book or online tool will include practice test questions for which it provides answers with very clear, direct explanations, which make it much easier for students to identify the areas they need to focus on. I definitely agree a student shouldn’t spend much time on concepts they already know well (and I’d hope they’d have figured that out by now!) Perhaps the best way for this student to use a prep book would be to start by doing the topic-specific practice questions at the end of each chapter, and then only dig into the chapters where he misses questions.

Thanks for your advice curiocity. It is in fact the “standard English conventions” score that brought down the ERW score, in his case… all the other subscores are 13-14 and math is fine. This seems like something relatively straightforward to study for.

I definitely agree a student shouldn’t spend much time on concepts they already know well (and I’d hope they’d have figured that out by now!)

Some people may believe that they know something well and confidently answer the SAT or ACT questions on it… incorrectly because they do not know it as well as they thought.

We decided UT Austin is no longer a choice after today’s final court decision. Also crossing off some other great schools that were under consideration but had not yet made it onto the list. Is it possible to edit the initial post, as the college list inevitably changes?

If your S is going to apply to University of Toronto, he should apply for the Pearson scholarship. It’s a full ride for 4 years. It requires a nomination from his high school, so it’s best to start early.

We decided UT Austin is no longer a choice after today’s final court decision. Also crossing off some other great schools that were under consideration but had not yet made it onto the list. Is it possible to edit the initial post, as the college list inevitably changes?

If you make a post on this thread with the new list, it will be fine. People can generally keep up with the changes.

Our legacy schools would have been interesting reaches to try for (Stanford and NYU), but with no possibility of merit aid, there is no point in applying to them!

NYU has merit - although slim to none odds.

You have many a school on the list that will hit the $$ target.

Thanks! On the Dataverse merit aid listing, it says NYU gave merit to 8% of freshmen w/o need, but average merit was only $6180, which would hardly scratch the surface of $80k total cost. So I put it in the category of “zero chance of getting enough aid to make it affordable.” Or am I missing something? NYU is attractive in many ways so if they do have a fabulous and possible scholarship, it would be good to know.

Cincinnati and Utah will have the same issue as UT Austin, so you can cross them off too

Nope - the odds are slim to none - but not impossible. If NYU works, then don’t forget your BU and GW and even a Pitt or Minnesota. VCU. Depaul. Not sure on engineering offerings - but if NYU works (presumably due to urban), that’s some to look at. UAB too.

That’s where a VANDY - they have half and full - so I say - it’s worth a flyer knowing you’re likely to get rejected and get in get nothing.

But as long as you have your I got in, can afford, and would love to go to somewhere - those, in my opinion, are worth a flyer…as would NYU because it’s highly unlikely but if the dream school - not impossible.

I believe engineering/CS at NYU are not in Manhattan but Brooklyn. If I’m wrong, someone correct me.

So in your case - if you know you’ll get into a Cal State or Arizona and you’re good with that - and you can get into Arizona early - than any other school that “could” get you to the $ you need - there’s no harm in applying.

Just make sure you have that definite, that you can afford, and that you’d be happy at.

The rest can be dreams.

Cincinnati and Utah will have the same issue as UT Austin

Yeah, it’s a concern for many states. I have friends in TX and have discussed the issue with them, so we have crossed TX off the list, but don’t yet have as much info about specific laws in some other states, so some other schools remain on the “still learning” list.

I don’t want to get political in this thread. But for example one of the things a friend pointed out was the TX redistricting map that consolidates power into deeply red districts. From my friends’ point of view, this is not just about a single issue (even though this is a big issue on its own) but also about the future of TX and its laws on many social issues. People often settle long-term close to where they went to college, and friends are saying that they wish today they had not settled in TX. 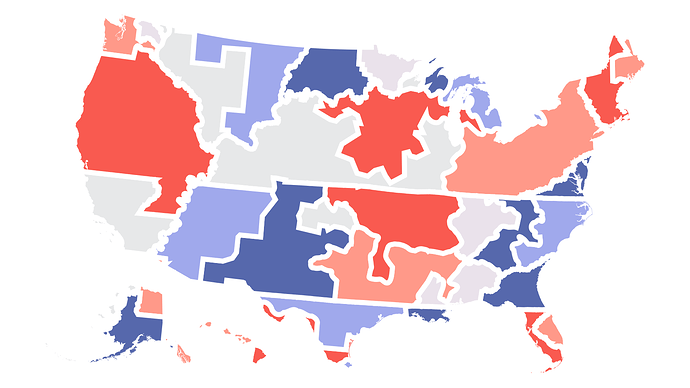 If you look at other states such as OH and PA, even after the current redistricting, there seems to be more balance of power remaining in these states. I don’t know much about Utah. There is a lot of “still learning” involved for us and we need to have more discussion as a family before crossing out half the states on the map.

If you are concerned about gerrymandering resulting in entrenched minority party rule in a given state, you may want to look at how gerrymandered the state legislative districts (rather than the congressional districts) are.

Thanks ucbalumnus. You are correct in practical terms. This is just how my friends in TX are feeling about their state’s direction in general, and this is contributing to our decision to cross out this particular state.