Then why even visit? Seems like a waste of time.

For me it was because I think my son needed to see a real college tour and begin to actually verbalize specifics about what he didnt like. So yes, even though we knew my son would not apply to a college, we toured it (and yes it solidified him saying it wasnt for him.)

D22 visited 9 colleges last year before applying but only did 3 formally led tours. Of those, 2 provided lunch in the dining hall — Rose Hulman and UIUC (I don’t think CWRU did, but I wasn’t at that tour). All of our other visits were self-guided and we should have prepared better when seeing Purdue on one of the hottest days I can remember! Once she got all of her acceptances there were 3 schools she was seriously considering and planned on attending all of their accepted students’ days. Boulder even had a “mocktail” party the evening before their accepted students’ day just for women in engineering that looked really nice. In the end, she wanted Indiana so we canceled our trips to Boulder and Pitt and didn’t attend their admitted students’ days. We did attend IU’s Luddy Day (for direct admits to the Luddy School of Informatics, Computing, and Engineering) which was great — boxed lunch, bagels/snacks/coffee in the morning, swag, etc. IU also had a nice reception in Downtown Chicago for IL scholarship recipients. That event sealed the deal for D. While she loved the hot chocolate bar, dessert stations, ballroom reception, etc. it was when a TA from her 2021 Women in Cybersecurity Immersion summer camp remembered her and said excitedly “Hey, you’re X! From my class!” that she was sold. Keep in mind that camp was online last year, this reception had over 300 high school seniors in attendance, and everyone was in masks. That D was remembered and recognized by her TA made all the difference. It doesn’t matter that she originally thought Denison was a good fit for her in size and style, this school with 10,000 class of 2026 freshmen somehow made D feel seen and she’s thrilled.

Same here. Went on a tour this summer of ASU. I was pretty sure going into it that DD wouldn’t like it and I was correct. But it got her thinking more about college. She kind of had to see an actual dorm room in order to understand what the living environment might be like.

…and THEN she started talking more about what she thinks she wants/doesn’t want in a college.

Fresh, I think your daughter and my son were working off the same list - RHIT, CWRU, Pitt and Purdue. No one fed us though.

We just started doing college tours and have only done one, University of New Hampshire. It was a hot 90 degree day. I can’t recall if they offered water because we brought our own. They did off er lunch vouchers for the dining hall to the group. I think we were the only ones who took them. The food was fantastic!

The student may have been interested in that school.

We did not limit where D21 could visit. If I had an opinion about the school I kept it to myself.

Prime example of a school she wanted to visit when we did SC/NC/VA tours that I thought was a waste of time based on my outdated knowledge… Elon. It turned out to be our best tour. And not because of the food and beverage, though that was a nice touch. It was the personal campus tour. Then the personal meeting with the department head and a current senior in her major. Then the one on one coffee and chat downtown with the current student. The department tour was initiated by Elon, not requested by my D.

We would have missed out learning about a wonderful school if I’d allowed my opinion to influence her process at that stage.

ETA: This was early 2020 before covid protocols.

We visited a couple of schools early on that were near by just to see if D had a size or campus location preference. I felt like D learned something on every tour we went on and it helped her pinpoint the “must haves” vs the “nice to haves”. One of those schools ended up staying on her list as a safety as she ended up liking it much more than she expected. We actually were all very impressed.

We were also pre-covid so it was easy to visit but our in person visits were very, very helpful. Some schools that looked great on paper ended up being terrible fits after deeper dives and visits, and vice versa.

Probably the best tour we went on was UNC School of the Arts.

The tours were led by students and they divided up the group based on what conservatory they were interested in. At that time, my D was interested in Design and Production but with two very different programs. The tour leader took us through the D&P department and found faculty members from the two programs to meet my D. She ended up getting invites to tech that night for two different productions.

The following day was her interview, and she was able to meet with faculty from both programs during her portfolio presentation. They really took the time to personalize the experience for her.

She learned about her recommended acceptance that day. The entire experience was really fantastic! What a great way to welcome a student to the school.

Yes, they did have a very similar list! I followed along with interest as your son was considering RHIT. It would have been a good fit for my daughter’s personality, and she strongly considered it but the gender ratio killed it for her.

Did your daughter end up at UIUC?

No, she’s at Indiana University-Bloomington!

Food for thought for all the posters on the parent thread who seem visibly triggered by brown-spots on college lawns:
Opinion | Kill Your Lawn, Before It Kills You - The New York Times (nytimes.com)

Colleges your child crossed off the list after visiting, schools that moved up on the list. Why?

Wesleyan . . . The brutalist art buildings don’t blend with the main portion of campus.

While cleanly designed, the arts complex at Wesleyan cannot properly be classified as brutalist, in my opinion.

That’s fair, I’m not an architect. I guess they are technically “modernist”?

Well, what’s interesting is that in all the time I’ve been on CC, no one has ever dinged the one true example of Brutalism on the Wesleyan campus and that is its Exley Science Tower. I think it’s because it looks like so many other science buildings of the period; no one is surprised by it:

At Wesleyan, by the time you are done, you will have absorbed a lot of architectural history - whether you intended to or not.

The problem is that it’s a relatively cheap method to use, and so it’s really easy for it to be used badly.

As an opinion, Wesleyan’s arts center, while modernist, also may represent a form of unadorned classicism. Predecessors with similar attributes appeared at least as early as the 1930s.

For definably brutalist campus architecture, an example of a residence hall from Hamilton College’s south side may be of interest. In this case, the extensive use of glass visible in the photo appears as a feature of all dorm rooms: 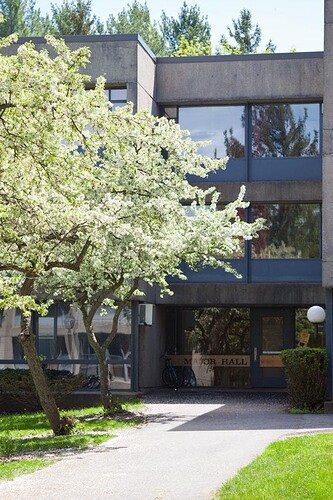