Curious how specific emails are shared with scammers. I’ve occasionally received emails from friends from long ago. They start with a simple, “Hi, it has been awhile. Check this out” or something similar, with a link. I usually catch those since it comes from contacts I have not had in a very long time, whom I doubt would send me an email after so many years. And the notes are typically that short. Most of my friends send much longer emails – but not always.

I got one for Rudolph

My husband makes me nervous. He will forward voice messages and emails to me, asking if we need to do anything, when they are obviously scams. I guess he just doesn’t want to take a chance on missing something, but they’re pretty obvious. At least I think I have him trained to never respond to anything.

I once got an email invitation to a very nice dinner to introduce a business to the area. It seemed too good to be true, but it turned out it was real. The common conversation at the dinner was, “How did I get on the list? This is spectacular.” Open bar too.

I only had my phone with me when I got the invitation so I forwarded the email to my husband to check out.

My aunt just passed away and I am successor trustee. She had given me access to her email and I saw a notice about successfully charging her bank account $499.99 for a year of computer security. I don’t yet have access to the bank account to verify. It seems suspicious - invoice was spelled wrong in title- but it is something she might do if they had locked up her computer. I am just starting to sort out her affairs. Has anyone seen one like this? It gave an 800 #to call for billing issues or cancellation but I hesitate to call.

I don’t know about your service, but my mom had an 800 number written down to cancel her computer anti-virus company. I called it and put it on speaker phone expecting to be on hold for awhile. It was a s-- line telling me to press one if I were a man interested in a woman, two if I were a man interested in a man. I hung up by three. H immediately called out from the kitchen, “What was that?” I double checked that I had dialed correctly. Yup. If they tried to charge her anymore after that it didn’t go through because I canceled her credit cards.

She had an actual account with an anti-virus company, but I googled the number. Even then I was told by the nice lady on the other end of the line, “Oh honey, don’t tell anyone I told you this, but your mom was way overpaying for a service she didn’t really need.”

So many places take advantage of older folks. I’ve learned to be super wary - esp as I age.

Google and find the phone number on your own. I do,that whenever I am in doubt.

Contact the bank and see if the charge is really there. If not, don’t worry about it. If it is, deal through the bank (and shut off any automatic payments).

Apparently my social security number has been compromised and if I don’t act on it, they will have to put some sort of hold on it according to the “officer” who called.

Naturally I didn’t bother fixing it. I can only assume this means I’m no longer responsible for my taxes.

I have a new one (for me). A woman, English speaker, calls and says she’s Officer (detective? agent? made it sound like a cop) and looking at the legal case I’m a subject of, and I must immediately put aside whatever I’m doing and hold for the officer on my case. Got this yesterday and today.

Got a similar one about a year ago. Officer gave his name local police on phone message. No contact number or badge number or case number. Called the police department- never heard of him and no they were not trying to contact me.

Some person has been texting me for months, calling me Mary, saying I have a voucher, that is not being shipped

Another person keeps texting me, calling me Jeff, and telling me that I have 100 dollar gift card at Pizza Hut.

Obviously, I can not be Mary AND Jeff at the same time…

In fact I am neither Jeff nor Mary

Seems like the phone version of the fake police car scam leading to robbery or other crime.

Governmental agencies tend to be old fashioned. They send letters in the mail (and if its really serious, send people to your house) rather than make phone calls. And you get time to respond unless you are arrested but even then you won’t have a trial that day. So calls purporting to come from the IRS, police, social security, court system, etc. are pretty much guaranteed to be a scam. But I often get calls with this as the premise at least a couple times a month.

Social security numbers are never suspended. I get calls about this as well. In the last couple of weeks, those calls have ranked up significantly for some reason.

A number of years ago, my parents received a call from purportedly from one of my nephews. Said he was in jail and needed bail money. My mom told the caller on the phone pretending to be her grandshon that if he had done something wrong, spending a little time in jail was likely the best thing for him. My mom was very sharp mentally but she also could be a little cold at times. Though I think its more likely she knew it was a scam.

I get emails for Joel, Richard, and a host of other people. I also got notes about PayPal, banks where I have no accounts snd no business. Not quite sure why but also get make enhancement ads and solicitations for joining singles websites.

I get notices about packages where I’m supposed to click s link to track when I know I’m not expecting anything (nope, don’t click, but thanks).

They sure are wasting their energy on me but I’m sure they are missing whatever demographic im supposed to be.

Supposedly I’m either Kevin or Ashley. I had been thinking one of them had my number before I did even though that was eons ago - either that or one of them had filled something out putting my number down instead of theirs.

“College Testing Center” called, stated my daughter’s name and said he needed to speak to her parent regarding study guides that she had requested. I stated I was the parent and asked when/where the study guides were requested. Man stated that her school had to make the request but he couldn’t go into detail without speaking to her parent - he knew her name and our address!!! I stated she didn’t attend a local school and was hung up on. Didn’t confirm her name, just that I was “the parent” and didn’t state what school she attends (NOT a brick and mortar school at all)…it’s disconcerting that he had her first and last name as well as her street address…

Article on how someone infiltrated a scam boiler room: 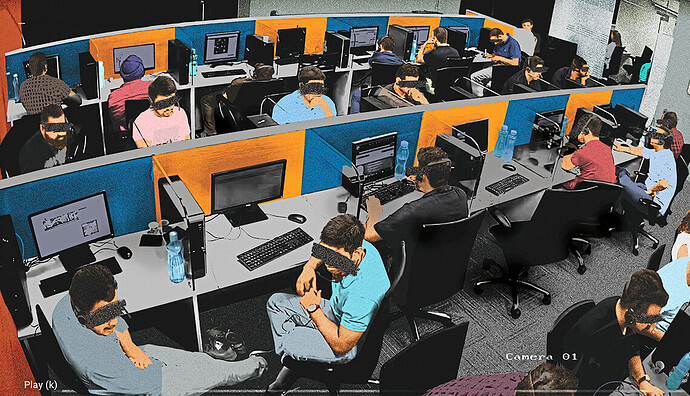 Inside an International Tech-Support Scam

AARP Fraud expert Doug Shadel meets a computer hacker who uses his skills to take down fraudsters and expose their schemes.

Excellent read. I wish I had the aptitude and the time to confront these people. It does give me even more incentive just to ignore them. I am not their equal on the computer and would likely just get myself in trouble by engaging them.

@ucbalumnus Thank you for posting that article. Sadly, the first type that they describe is exactly what my mom bought into a few years back. I tried to tell her it was a scam back then, but she assured me the guy was so nice on the other end of the line and showed her a bunch of bugs on her computer (sigh). It’s also likely the same number that turned into a se- line when I called it after her death. Seeing the guy admit to being a scammer and being proud of it is super infuriating.

I wish more people could confront these places and intervene in time. We all wonder why we get so many calls. It’s because it’s super profitable to those on the other end (sigh).