So Many Restaurant and Hotel Job Openings

Here’s an article about how one ice cream shop (as well as many other businesses) solved their staffing problems…overnight!

"It was instant, overnight. We got thousands of applications," Maya Johnson, general manager of Klavon's Ice Cream Parlor in the Strip District, said. Here's how she and other Pittsburgh-area companies are getting workers in the door and onto payrolls. https://t.co/eiHhdw6m7t

"As March drew to a close, Klavon’s Ice Cream Parlor in the Strip District found itself without enough workers for the upcoming spring and summer rush, and it certainly did not have enough workers to open the shop to its desired seven days a week schedule.

Then, on March 30, the parlor announced it would more than double the starting wage for the roles, going from $7.25 an hour to $15 an hour, a scoop that seemed to captivate workers throughout the region and one that earned a significant amount of local media coverage.

“It was instant, overnight. We got thousands of applications that poured in,” Maya Johnson, general manager of Klavon’s, said. “It was very overwhelming, very. People were coming in by the next day that it broke on the news, they were coming in, filling out paper applications. I was doing on-the-spot interviews.”"

My housekeeper of 12+ years is here today. She is once again with only one other person. Usually she has a team of 2-3 others with her. We have had numerous discussions regarding her frustration and inability to find willing workers. She is fully licensed, bonded and only hires people with ‘papers’. She pays $20/hour. She will have some that work for a couple of weeks and then leave. They simply make more on current available benefits or find that the benefit amount is enough to make not working doable and prefer that lifestyle.

Her husband, a landscaper/gardner is having the same issue.

We have had a gentleman pick up the leaves and slash from our cabin for 10+ years. He always had workers - usually those folks who work the ski resorts during winter months. Now, he can’t find anyone willing to work for him. Once the ski resorts closed and the benefits kicked in a large swatch of those previous employees realized they could function just fine without the bother of going to work.

So…those are anecdotes from the front line.

BTW…for those that haven’t ever paid their own employees…please note…a raise of $1.00 to the employee can cost the employer anywhere from $1.50 - $1.85. (personal experience from many years ago). Each additional $$ of pay also increases the employers payroll taxes, benefit costs etc.

Why Restaurant Workers Say They’re Not Returning to Work - Eater suggests that there is a mix of reasons (not necessarily mutually exclusive nor applicable in all cases).

The unemployment rate has gone down steadily for months. We are now at 6%, where we were hovering at 4% for a few years prior to the pandemic. The economy for workers (as opposed to only investors) is booming and many workers who previously earned low wages are getting higher paid jobs in construction or manufacturing. Thousands of previously employed moms now do not have the option of returning to work because they have kids at home. Extended unemployment benefits have either already expired or are winding down. Each month, the supply and demand ratio is trending more and more in the workers favor. Employers are going to have to adjust their wages accordingly.

A person who earns $20/hr will suffer a significant loss in salary by collecting unemployment, even with the additional $300/wk benefit.

I think there might be an issue with getting a full 40hrs a week at $20/hr with housecleaning, especially if the owner is not paying for travel time between houses, or doesn’t have enough houses to clean to get that many hours. If the owner is still cleaning as well, it doesn’t sound like she is swimming in business.

That is not true across the board. It depends on your state. 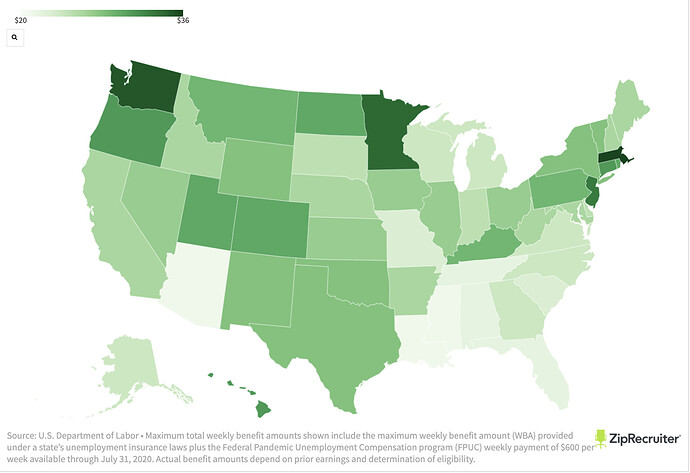 A Guide to COVID-19 Unemployment Benefits by State - ZipRecruiter

Until you find your next job, we are here to help you understand how the CARES Act affects the unemployment benefits available in your state.

Additional math would include how much comes out for taxes (without being refunded later) and how much unemployment pays beyond the extra 300 (assuming none of that is taxed).

I live in Washington state. Regular state unemployment is 38% of your average quarterly salary in the year preceding your unemployment. That is going to be calculated on your W2 wages. Many/most? restaurant workers are not reporting all their cash tips, so they are not getting the full benefit they would otherwise qualify for. Even if they did, 38% +$300 is not more than they were earning before. Now restaurants are operating at 50% capacity and reduced hours, so tips are going to be lower than they were. Add to that belligerent customers with mask issues. Why would anyone go back to that job right now?

The same shortages are being seen in the senior home care industry. The agencies where I now live in north Florida are having serious problems finding caregivers willing to work. It has been hard finding 12 hour a day care for my mother since our move. 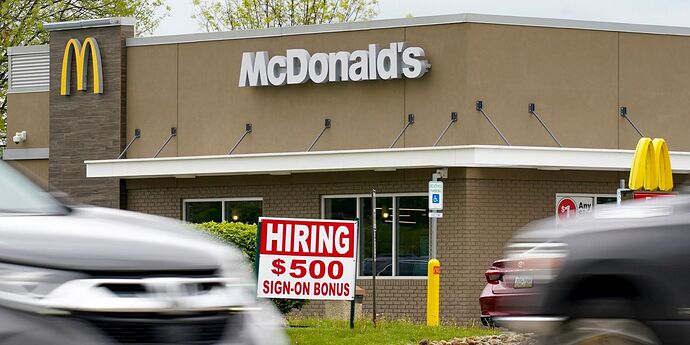 U.S. employers in sectors like manufacturing and restaurants aren’t finding enough people to hire, threatening to hold back the country’s economic recovery. Among the reasons potential workers are holding back: fear of getting Covid, lack of child...

A University of Chicago study found 42% of those on benefits receive more than they did are their prior jobs, and the share is higher when factoring in temporary health insurance offered through relief bills.

A University of Chicago study found 42% of those on benefits receive more than they did are their prior jobs, and the share is higher when factoring in temporary health insurance offered through relief bills.

To me that does not say that the benefits are too high, but rather these people are clearly underpaid.

Can anyone find and link this UoC study? The only one I can find is from early in the pandemic when federal supplemental benefits were $600.

The concept of being underpaid doesn’t exist in a vacuum. Has to be relative to something. So these people are underpaid compared to what? Value they bring to the table? What employer could pay other people to do the same job? How much they think they should be paid? Want to be paid? Something else?

Another sample to add; my landscaper returned my deposit of almost $10,000 to work on my new yard. He can’t hire workers at $25 and cutting down his business to absolute minimum.

It says to me that Government is free to spend other people’s money with impunity, while actual employers, especially small businesses, have other factors to consider when setting someone’s wages.

H and I were contemplating minimum wage today while driving to the nearby town. It can take 2 gallons of gas to get there and back with a 25mpg vehicle. That means an hour of work would be spent just getting to work and back (with a little extra for taxes or car maintenance if saved up over time).

The good news around here is the news showcased two businesses hiring and each had decided to up their entry level to $14 and $15/hr respectively which has definitely helped their number of applications. The news also talked about how many who had lost their jobs turned to something else and finding they liked it much better, plus it often paid better - even if it was gig work or something online.

I honestly don’t know why anyone would want to work practically any job for $7.25/hr if they were trying to make ends meet. Getting creative, often online, seems to do much better.

Less than 2% of wage earners make federal minimum wage. Many states have higher minimums. And many employers need to pay more than minimum to get sufficient number of workers. About half of those earning mimimum wage are 25 and under. 5% of kids 16-19 who are paid hourly made federal minimum. 1% of those 25 and older do.

But in restaurant business the server’s minimum wage in most states is $2.13 because they’re supposed to get tips. Tips are lousy right now so hard to make a living. And there really is very little considered full time work.