Have you spoken with a financial coach (someone to help you set up a monthly budget for all expenses)? Unfortunately, the longer you delay payments, the more you owe since interest continues to accrue. It’s like a snowball rolling down a hill; it WILL become a giant snow boulder, and it can’t be discharged in bankruptcy. Is there any path you can create to pay off the debt instead of continuing to push off payments?

it can’t be discharged in bankruptcy.

I see this a lot, yet I know a relative of mine did get hers discharged in bankruptcy. I’ve always wondered how she did it or if it’s common. Does anyone know?

It isn’t very common. The other issue is that the borrower needs to be very cognizant of the repercussions of declaring bankruptcy and it’s effect on their credit for seven years.

“You may have your federal student loan discharged in bankruptcy only if you file a separate action, known as an “adversary proceeding,” requesting the bankruptcy court find that repayment would impose undue hardship on you and your dependents.”

Courts use different tests to evaluate whether a particular borrower has shown an undue hardship.

The most common test is the Brunner test which requires a showing that 1) the debtor cannot maintain, based on current income and expenses, a “minimal” standard of living for the debtor and the debtor’s dependents if forced to repay the student loans; 2) additional circumstances exist indicating that this state of affairs is likely to persist for a significant portion of the repayment period of the student loans; and 3) the debtor has made good faith efforts to repay the loans. (Brunner v. New York State Higher Educ. Servs. Corp., 831 F. 2d 395 (2d Cir. 1987). Most, but not all, courts use this test. A lot has changed since this 1987 court decision and some courts have begun to question whether they should use a different standard. For now, most federal courts of appeal have adopted the Brunner test, but the law in this area is changing.

A discussion of examples of undue hardship are set out in this website. 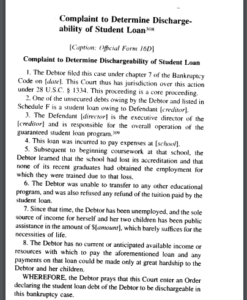 My ex-husband and I filed bankruptcy in February 2015. The attorney told us I would not be able to get my student loans discharged. We separated later in 2015 and divorced in 2016, I have worked very hard to rebuild my credit and finally have my credit score back in the 700’s even though the bankruptcy has not come off yet. I definitely don’t want to go through all of that again.

I have a budget and am actually very tight with my money overall. Thankfully since my ex and I filed bankruptcy a few years ago I have not had any credit card debt. I have a mortgage on a modest house, a car payment on a used car, and normal expenses like utilities and such. I am working from home, so not a lot of money on gas and clothes. We are on a cell phone plan with my parents and I pay the costs for our phones. I am getting a discount on my internet through the affordable connectivity program. I haven’t had cable or satellite in years, we have a hulu subscription for $1.99/month. My kids have medicaid and I have insurance on myself through work. I have never had things like a manicure, massage, etc. and just get a basic haircut every 2-3 months. My older kids have had jobs and pay for their gas and spending money, new cell phones and my daughter is paying for her senior class trip.

I realize that delaying payments will lead to increased debt but I really don’t think there is much else that we can cut.

@HeartofDixie contact The Institute of Student Loan Advice. They are a reputable, free, non-profit entity that can answer your questions and explain your options better than CC posters. https://freestudentloanadvice.org/ 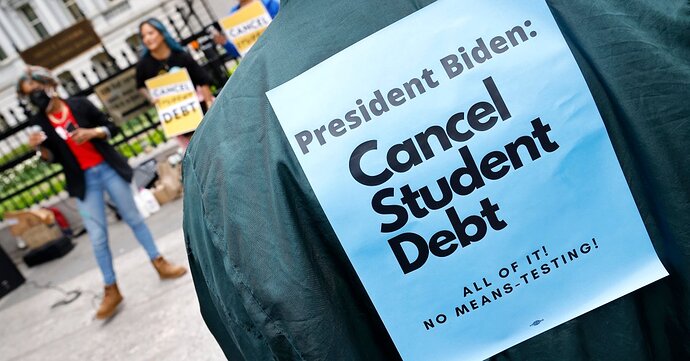 Parents whose children received Pell Grants are not eligible for the $20,000 in forgiveness although they took out loans federal Parent PLUS loans to help

In a letter to Biden on Monday, eight Democratic Senators, led by Maryland Sen. Chris Van Hollen, asked the administration to extend that additional $10,000 in forgiveness to Parent PLUS borrowers whose children were Pell Grant recipients, to include Parent PLUS borrowers in more lenient repayment plans based on income, and to allow parents to participate in the Public Service Loan Forgiveness program as long as their child has a job that meets the public-service qualifications.

“These borrowers demonstrated significant financial need at the time they borrowed the PLUS loan, as evidenced by the fact that their students qualified for Pell Grants based on family income,” they wrote in the letter to Biden. “Like student borrowers who received Pell Grants, these borrowers also face numerous barriers to successful repayment and should receive relief.”

More than 3.6 million Parent PLUS borrowers currently owe a collective $107 billion in student loans, which accounts for about 10% of all student loan debt in the U.S.

I’m not sure if you’re interested (or anyone reading who has standing to join the Politics Group), but this topic is still ongoing on the Politics Forum if you are. I think this is a link to join:

Your particular situation is so difficult. People like you who are still paying loans have paid so much already, but the interest has been piling up. I’m so sorry that you aren’t able to benefit from this.