Theranos, were any of you victimized?

They do it to poor women of color all the time. Though not to anything as nice as club fed.

If they had read about how she pursued and threatened to destroy former employees reputations, and drove them to suicide, they might have a different idea of what she really is. She reminds me a bit of Karla Homolka…totally w/o conscience.

Not related to this trial, but sheesh… this travel agency must be not very happy that all Google hits lead to a different EH!

But!! But… it was all done for the greater good for the humanity! /sarcasm off.

I completely agree. The book Bad Blood went to great lengths to make sure the real Elizabeth was revealed, and all I saw was a sociopath. No genius, just someone who thought she knew way more than she did, wanted adoration, prestige, money-the “good” to society was not actually her priority.

A vengeful, mean, dictatorial, manipulative, deceitful person who got away with a lot because of her seemingly innocent, young face. Numerous high profile people and institutions got taken in by her because they were so desperate to believe in her as a symbol, and did not do their due diligence. Props to the WSJ reporter and the brave former employees who spoke out, often at great financial and personal cost.
I have no doubt that she would have a baby as an attempt to garner sympathy during the trial. For those who haven’t, I strongly suggest reading Bad Blood, and some of the follow up articles, before passing her off as a well meaning entrepreneur who was forced into a mistake or two by her partner.

Bad Blood is an excellent book. I was shocked when I read it to see that someone my husband and I know, a former colleague of my husband, is not only mentioned in the book but was one of the investors that got suckered by her. He’s not exactly a wealthy guy compared to some of the others mentioned.

Or listen to the podcast, The Dropout, if you prefer to listen instead of reading Bad Blood. 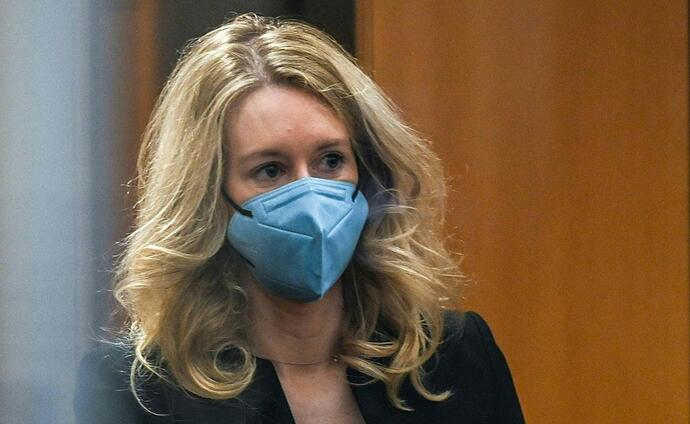 The govt. seems to want to wait till after the trial of her partner in crime before sentencing her. I am hoping that she doesn’t get off scot free, or anything like it, in exchange for testifying against him.