Transfer out of Dart

For undergraduate school, he attended a top ranked National University which had the number one rated / ranked program in his primary major.

My impression is that you just need a little more “breathing room” than that offered at Dartmouth College. Essentially, this translates to a need for more diversity & more social options. You will find this at Northwestern University, Michigan, & Cornell, as well as at most other schools which I have suggested below. The College of William & Mary might be of interest to you.

SESP (School of Education & Social Policy) at Northwestern University might be of interest to you. Best program in the nation. Flexible degree / flexible career options / great preparation for law school or other graduate schools in education / political science realm. Tight knit group of diverse students in this LAC-like school within a large top 10 National University. Students can double or triple major at Northwestern. Easy to transfer among schools once admitted to NU.

He would have been very happy at Dartmouth, but the emphasis on the social life affected our collective (family) opinion at the time.

And, personally, I have always clicked with every Dartmouth College graduate or student whom I have met–but all were met outside of the Dartmouth social scene at various stages of life over several decades.

Notre Dame & Boston College may be of interest to you.

I hope this information is helpful to you.

SESP (School of Education & Social Policy) at Northwestern University might be of interest to you. Best program in the nation. Flexible degree / flexible career options / great preparation for law school or other graduate schools in education / political science realm. Tight knit group of diverse students in this LAC-like school within a large top 10 National University. Students can double or triple major at Northwestern. Easy to transfer among schools once admitted to NU.

I second Northwestern’s SESP. I know someone who recently graduated from there who transferred from Dartmouth and they loved it (compared to when they were miserable at Dartmouth).

How about Davidson? They don’t have traditional Greek life, but rather eating clubs.

Initially, I was not sure of which schools might be of interest to you based on your stated preference for an outdoorsy school. Assuming that that aspect is not a primary concern, then I would like to add Georgetown’s School of Foreign Service (SFS) tothe list of suggested schools.

Why 2021's college sophomores are the new freshman

With so many colleges going virtual last year, many sophomores are on campus for the first time. But it's different — a lot still feel like freshman. Colleges set up programs to get them caught up.

OP - FWIW you sound like someone who’d fit in well with the NU social groups I see.

My D is an NU sophomore and loves it. She also toured Dartmouth and loved it. Like you, my D is academic, social, outdoorsy, plays outdoor sports, etc. She really loved the Dartmouth campus, the student bus to the ski slopes, and that program where all the students go to live in the woods to bond (whatever it’s called?). She ended up picking NU due to their engineering program, but really loved the outdoorsy vibe of Dartmouth.

We live in IL, so I’m at NU somewhat frequently. My D has lived in Evanston student housing (on & off campus) since starting college and as a “local parent” I’ve gotten to know quite a few students there (sophomore women/men). Here are some thoughts:

These students come from all over the world - NYC, LA, Miami, London, Rome, Brazil, Dubai, African villages, small Nebraska farms, etc. and adapt to the down-to-earth, Midwestern vibe. I see very little “flaunting” of wealth/prestige, etc. I just found out recently that D friends include children of Hollywood stars and billionaires. Other friends grew up poor in the streets of Chicago. This friend group is traveling together over Winter break and the billionaire’s son is not treated any differently from the scholarship kid.

At NU, I haven’t seen this sort of “secret handshaking,” social climbing/positioning to investment banking, etc. This kind of perception of “old clubbiness” (deserved or not) is why my D didn’t want to apply to Princeton. I believe NU students strive to not fit this mold. E.g., my D and her class peers have been repeatedly emailed by the BIG hedge fund/IB recruiters and they are just not impressed by that lifestyle. I don’t know if this is a generational thing or an NU thing, but to blow off intern opportunities from places like NYC Goldman Sachs in favor of volunteering to build clean water systems in poor communities is kind of mind-boggling to this student of the 90’s.

I think this school does a fantastic job in finding/putting together its student body. My D is now friends with such amazing students from all parts of the world. NU also takes a fair amount of transfers. I have heard that a lot of value is put on the student admission essays. OP, best of luck to finding your best college fit.

I agree with much of your post…with the exception of this:

At NU, I haven’t seen this sort of “secret handshaking,” social climbing/positioning to investment banking, etc.

I also live close to NU, and am a Kellogg alum. Make no mistake, there are many students who are looking to go into IB or MBB consulting, but it might feel like a smaller proportion than at Dartmouth because NU is larger, and more diverse.

This linked article says 10% of NU grads go into consulting, for class of 2020 it was actually 15% (plus another 18% for business services/financial services/IB)

What business club should you join at Northwestern?

A comprehensive guide to all the business clubs here at Northwestern and which ones are right for you!

Many of the business clubs/frats at NU are also highly selective admissions (mentioned in the above guide to business clubs). Although NU could be a great fit for OP, I don’t want OP to think that NU will be a kinder, gentler school with fewer social climbers/IB aspirants than Dartmouth.

I don’t want OP to think that NU will be a kinder, gentler school with fewer social climbers/IB aspirants than Dartmouth.

Ehhhhhh…. the one person I know who transferred from Dartmouth to NU would disagree. Sure, both have their fair share, but per capita, NU has less of those people and a niche for all types (unlike Dart).

Northwestern’s culture is quite a bit different than that at Dartmouth College.

When you say “different culture” can you elaborate? From what I’ve read it seems not a whole lot different… Evanston is small and it’s cold and dominated by sports too. Lots of DM’s about that….

I still think the OP should give it a little more time, since Dartmouth does meet some of their criteria, and one or two months is not enough time to judge fit. So many college students are unhappy these first few months, regardless of where they are, and the OP has the added disadvantage of being classified as a sophomore when it is their first year. I would try to change that!

By all means continue the plan to transfer, but don’t let that prevent you from trying to make friends or join activities. It is possible things could get better. If they don’t then fine, transfer.

ps one of my kids had a medical leave freshman year, and reentered after everyone else had chosen roommates etc…basically a similar situation of being officially in one class but in reality part of the next class…so I know that is a tough situation socially

If you care to state your intended major, it might help with suggestions.

Evanston has 80k residents and is adjacent to Chicago. There is free public transportation to the city for NU students.

I lol’d about sports - opposing visitors outnumber NU fans for most home games. Much more enthusiasm about the arts scene.

I’ll give you that it gets cold in the winter.

I agree with all of this.

Adding that Greek Life is under fire at NU and has been for a couple of years (about 40% of students participate, and AFAIK that doesn’t include the proportion of pledged first years, which is commonly how Greek stats are presented).

After at least two students reported they were drugged and assaulted, a group decided to immediately cancel all fraternity events through Oct. 17. 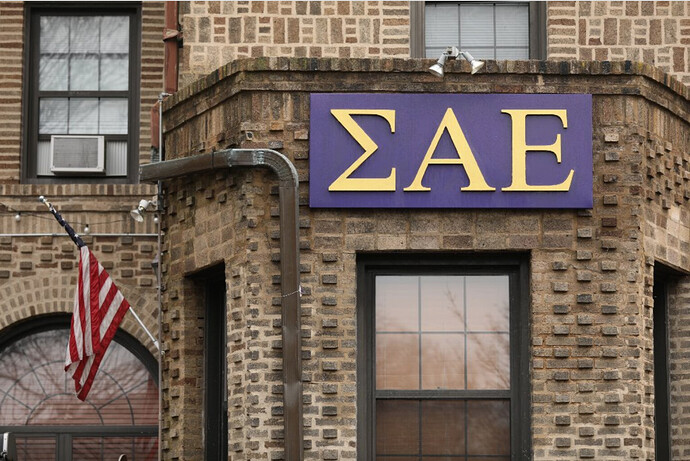 Citing histories of racism and classism, multiple sororities at the university are threatening to go dark — and one has already done so.

Lastly, IMO (of course), NU is more academically intense than Dartmouth, most commonly NU students take 4 classes/qtr, while at Dartmouth it’s most common to take 3 classes/qtr.

Northwestern’s lakefront setting is magnificent & contributes to a bit of an outdoorsy feel.

Greek life is there for those who want to participate, but not necessary.

Yes, there are similarities between Dartmouth & Northwestern. But, other than the weather and brilliant students, any further similarities are by choice.

Very strong intellectual / intelligence vibe at Northwestern. Strong work ethic. Students are too busy to waste time judging others. Opportunities to do a wide variety of activities.

The overlap schools in common between Northwestern & Dartmouth are: Yale, Stanford, Duke, & Princeton

As I noted in my earlier post in this thread, I suspect that you might be more comfortable at Harvard & Michigan (Northwestern overlaps not in common with Dartmouth’s overlaps). I also think that you might like UPenn, Cornell, & Princeton.

P.S. The Fiske Guide To Colleges loves both schools, but notes (in bold print) that at Dartmouth College “…the long-standing party culture persists.”

The Fiske Guide To Colleges asserts that “Northwestern University is comparable to Duke and Stanford.”

As an aside: Notre Dame University administrators share that Northwestern University (as well as Harvard, Duke, & Vanderbilt) is an overlap school.

Lastly, IMO (of course), NU is more academically intense than Dartmouth, most commonly NU students take 4 classes/qtr, while at Dartmouth it’s most common to take 3 classes/qtr.

Northwestern courses are supposed to be equivalent to 2.66 semester hours or 4 quarter hours, according to Courses and Credit < Northwestern University .

So each Dartmouth course is theoretically “larger” than each Northwestern course.

I understand. I took a summer session at Dartmouth years ago while I was attending Grinnell College. Many Dartmouth students who were not rich or popular like me felt the same and wanted to leave. I even had students I went to High School with at Dartmouth who pretended not to know me. A smaller liberal arts college might be a better fit for you.

If that was “years ago” I would not assume things are the same socially.