In addition, it sounds like it’s better to NOT get the $2,500 if you’re going to USC, if USC is going to turn around and give you an additional $4,000 instead.

THIS. The $2500 from NMC is good anywhere, but USC will not give the $1000 a year NMF stipend if you already have the lump sum $2500 award from NMC. That’s why some do decline the $2500 award. On the other hand, it’s money in your pocket now that she keeps even if she were to leave USC. The $2500 NMC award does not have any effect on the half tuition Presidential Scholarship. As far as changing her mind after March 1, I would call NMC and ask. They are very nice about answering that type of question.

There is no benefit for your daughter listing USC as her first choice by March 1. NMSC will send out notifications and update portals regarding the $2500 scholarship on or about March 25. She can wait until after she gets that notification to designate USC, or some other college of her preference, as her first choice. Stay on top of deadlines imposed by the other schools to which she has applied, however. For example, on the NM thread for class of 2021, a poster just indicated that NEU has a deadline of April 1 for first choice designation.

eta: I second the recommendation of @vistajay that you contact NMSC directly if you have any questions. They are so helpful and patient.

There may or may not be a benefit for listing USC as 1st choice by March 1. We were thinking that when USC sees the 1st list and sees my daughter has picked it as her 1st choice, that may help her get admitted into USC. Or not.

I did call NMSC and they said you could change schools anytime before May 1, because college sponsored scholars don’t get announced until after May. That being said, I guess some colleges won’t look at the last NMF list (May 1) to decide who to award their scholarships, hence they give an earlier date (the date before the NMF list they will use to decide who to give the scholarship to). That seems a little weird though. For example, if you list BU as your #1 school on Mar 1, and they get the 1st list and choose students from it. But then you change your school to say NEU by Apr 1, so NEU now sees your name and consider it for their scholarship. Now you’d be on 2 different colleges’ scholarship consideration lists because they’re looking at different NMF list pushes. Don’t know if BU ever checks that they got switched out!

I would add this - NMSC is being a little naive (rather than intentionally fictitious) with their advice. I have experience with ASU- the “NMSC” portion of the scholarship is $250/semester. BUT, ASU then guarantees 100% tuition for 4 years on top of that, roughly $34,000 per year. Would you take a one time $2500 payment over $34k per year? You can only accept one. Every school does it a little differently, but for most that offer big $$ to NMF, I think it is structured in a similar way (Alabama, UCF, UTD)

FYI - I am a bit jaded by NMSC. I really appreciate the financial support from ASU. Most of it comes from them, not NMSC. NMF sounds like a ‘big deal’ that can help a student get admitted to higher profile schools. Nope. I finally realized it is just a high level scholarship that most selective schools do not participate in. Even at USC, its only 1/2 tuition and that award is competitive, not guaranteed. Schools with big NMSC $$ are trying to attract higher level academic students to bolster their stats. Florida is a special case because of the state sponsored program, so my “swipe” does not necessarily apply to them.

I don’t know about ASU, but this is not how it works for UTD. S20 received $2,500 NMSC, but he also received what is almost a full ride scholarship from UTD.

One does get a little bit more money from UTD than NMSC, but we are talking about $500 over 4 years.

I believe most of the universities handle the situation the same way like UTD.

I would add this - NMSC is being a little naive (rather than intentionally fictitious) with their advice. I have experience with ASU- the “NMSC” portion of the scholarship is $250/semester. BUT, ASU then guarantees 100% tuition for 4 years on top of that, roughly $34,000 per year.

And I agree with your premise. I would still pass up $30K (50%) at USC for a full tuition ride at ASU. That’s $120K your student can use for grad school, or something else (like both a car and down payment on a home). 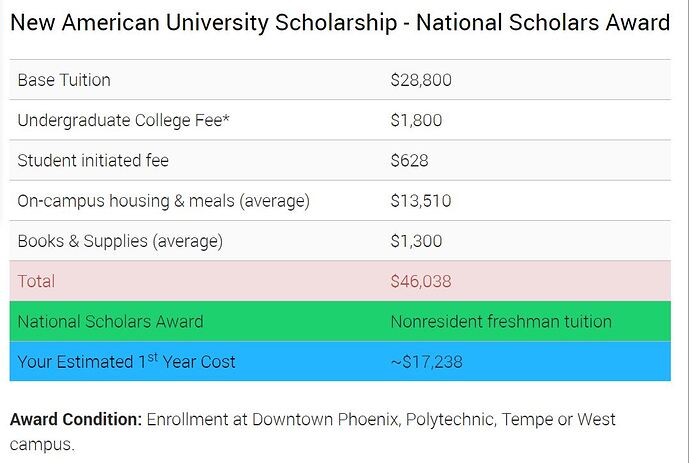 I sent you a message @sbdad12

I sincerely doubt USC admits NMFs just because they’ve designated USC as first choice early. They have tons of NMFs who apply, so I don’t think they could be bothered reviewing the first choice lists to see who they want to admit. They are more concerned with the contents of the applications. My daughter was admitted last year without designating them as first choice. Also, as my one additional anecdote, I know of a Trustee Scholar who did not designate USC early. So maybe there’s a benefit to not designating early?

I think playing the game of switching between colleges with early dates could bite someone who doesn’t stay on the ball about it. I don’t know of when they award their large scholarships (do they come with admission or later?) I personally would not want my child to risk a scholarship by playing around like that.

I believe (but am not 100% positive) that she should be able to receive both the Presidential and the NMSC $2500.

The $2500 is not bound to the school that is listed as your first choice at the time the scholarship is awarded. NMSC will ask you to finalize what school you will attend.