I couldn’t remember if we had a garden thread yet? A little early for my region ( northern Ohio) but I’m READY.

I’ve started some seed for fun inside and it’s going well - hope I can keep them going for another few weeks before being able to plant!

Stopped by my community garden yesterday - the garlic is up! 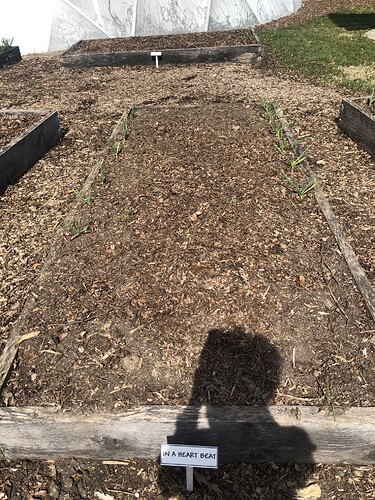 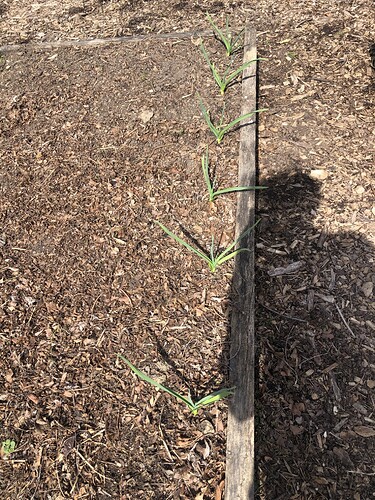 Here in East Tennessee, my garlic has been up for several weeks; although my shallots seem to have disappeared. I mulched both heavily with straw when I set them out last Thanksgiving; I don’t know why the garlic came up but the shallots didn’t. I have some collards that overwintered in another part of the garden, and which are now putting up stalks with the incipient seed pods.

I have numerous large pots (20 gal.?) in which I have planted some hot peppers (habaneros and serrano tampiquenos) and dwarf-variety tomato plants that I started from seed about 6 weeks ago. We are going to have a frost over the next couple of nights, following a rain front that has been moving through here, so I will have to cover up what I have in my pots; but hopefully this will be the last danger for frost before the usual “last frost date” of April 15 in this vicinity.

I have tilled up my larger garden (where the garlic is coming up), which is about 8’x40’; and in another week or so will be putting in several varieties of tomatoes that I started from seed – Tidwell German, Mortgage Lifter, Oxheart, and Black Prince – as well as some Marfax bush beans and Luther Hill corn. I have some seed potatoes (Katahdin, I think) that are being shipped to me; and if I can find some space in the garden I have some Moon and Stars watermelon seeds which I hope to plant. Finally, I am waiting for some okra to sprout under my grow light, and will transplant those into a few remaining large, 20-gallon pots once the okra is large enough.

There are a couple of blackberry canes that I keep on the edge of my garden, from which I usually get enough blackberries to make about a dozen 1/2-pints of jam every summer.

I am ready for the last frost to come and go!

I’m waiting for the nights to warm up before we pull the burlap off the raised garden bed but my chives, thyme and sage are already mounting a big comeback. My rosemary needs to get back outside soon because it’s drying out no matter how often I water (it winters in the sunporch).

Same for my oregano. Wintered but it’s struggling now - I think it might rebound once I harden it and get it outside.

I sent you a PM (or tried to) on another topic.

I have not started any tomato or pepper seeds yet… don’t want the plants to get too spindly indoors before the frost danger is completely over… I will be starting them this weekend! Black Krim is Mr.’s favorite, and I also secured Fairytale eggplant seeds early this year so those are my must plant veggies for this year.

I am not a huge eggplant fan BUT I really like the fairytale eggplant - I like the bite of the skin! 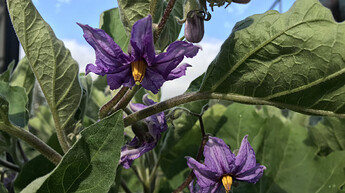 We’ve already been eating garlic chives and have broccoli, peas, kale, watercress, beets, and probably a couple of other things planted. We’ll be covering the broccoli the next couple of mornings with lows in the 20s + wind, but the rest should be ok I think.

It’s weird, but now that my youngest son is here doing Permaculture, H and I don’t garden as much. We just enjoy eating a huge variety of things. I feel like I’m being spoiled.

I am so pleased to have my garlic chives again available outside my door! Those few winter months without it - it was missed! I have a kale plant that wintered over and is producing new kale already.

I’m going to plant pole beans this summer in my raised bed. Is there a recommended “climbing” method to use? A metal trellis? A tall teepee with tall plant stakes? Something else that is not costly? I have a metal trellis but it’s only about 3 feet tall - not enough.

My guy built a trellis from nearby growing bamboo. He asked the property owners if he could cut some and they told him, “have at it.” He will be giving them some produce when it’s in.

He rebuilt our chicken tractor (pen outside the coop) for our chickens out of bamboo too.

I have a picture of the chicken tractor. I can get some later of the garden trellises.

I should also mention that I’m not very building crafty or skilled. I can manage a garden stake teepee and that’s about it for “building”.

I’m with you. It’s very helpful having married a guy who can do anything like that (esp since he could help the kids learn such things).

I wasn’t even useful helping them with school projects if it involved building anything at all.

My role was merely telling them how large I wanted the tractor to be - from Point A to Point B (actually pointing). I can handle that! Otherwise, I tend to be the one taking care of the chickens. I can do that too.

I have also used bamboo for staking pole beans (when I have grown pole beans, that is). We have some bamboo growing/spreading in a corner of our back yard, and I have made good use of it for pole beans (and smaller tomato plants as well).

Thumbs up for Black Krim! I used to have it in my tomato rotation; but my daughter (and some of the neighbors) developed a taste for Black Prince, so that is what I tend to grow among indeterminate black or brown tomatoes. This year I am trying a dwarf variety called Maralinga, which is a brown(ish) tomato; I’ll see how that works out, as some of the other dwarf varieties I have grown in the past have been a bit “meh” in taste.

Here are two pics of some of my guy’s trellises: 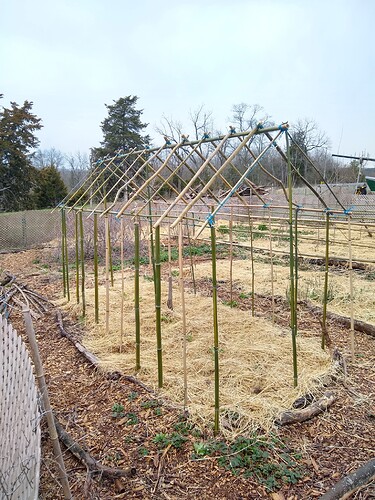 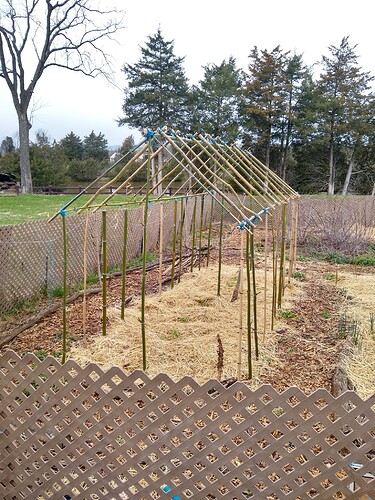 Very cool @Creekland . Did he grow a particular crop on these?

They’re going to be for various peas and beans.

I was looking for this thread! I need some advice about when to transplant and anything else that would be helpful to know. For 3 years now, I’ve been growing sweet marjoram inside only to kill them when I move them outside.
This year I have several seedlings and I’m worried about repeating the outcome. Last frost date in this area is April 15 so I wouldn’t move them outside before that.

Advice on indoor plants would also be appreciated. In the last 3 months I’ve successfully killed off a jade plant, 2 snake plants, and a mini rose, and currently have a begonia on the cusp.
My orchids refuse to bloom but are otherwise thriving (putting out new leaves).
This year has been bad for all things that used to be green and has me now second guessing everything!

Are you hardening off your seedlings?

How to Harden Off Seedlings - Gardening Tips and Advice from Burpee.com

I’m just recently getting back into indoor plants. I thought snake plants were hard to kill!

I think it often comes down to evaluating these things: