"Asian" in Chance Me and similar threads

I wanted to raise a point and perhaps a question about the use of the word “Asian” in threads, particularly chance me etc. threads.

First and foremost, Asia is a gigantic continent, encompassing various and wholly different countries/cultures from the Middle East to India to China to Korea to Siberia etc.

It seems like far too broad of a brush to apply to students and their chance of admissions. However, that may come from the way that the college apps etc request information.

Second, it does concern me that chance me threads etc focus on the “Asian” category and often raise the bar for those applicants lumped in this category. I am aware of the Harvard litigation to a small degree.

But are we sure that all colleges/universities, whether “tippy top” or not, automatically disadvantage applicants in every case because of their heritage from a gigantic land mass that consists of wholly diverse countries (I am putting aside the UC system etc)? I really don’t know, but something seems intuitively wrong in telling students that this hurts them when applying, without knowing the specific circumstances in each case.

I don’t mean for this to devolve into an affirmative action debate, but maybe that’s what it’s about. I guess my simple point is that telling a student that their admission chances are lowered by using the term “Asian” seems to be extraordinarily broad-brush. Is there a better way to phrase the responses? And are we absolutely sure that if someone is descended from a continent that has more than half the current world population that their application is automatically held to a higher standard at “top schools?”

I hope CC and all of us users can consider this going forward in our responses to applicants.

I think many folks refer to ORM when posting.

ETA: Now that I think about it, is “ORM” just a synonym for “Asian”?

I had to look it up. ORM seems to be the opposite of “Underrepresented Minority (URM)”.

People here (and probably elsewhere, like in high schools, etc.) generally tend to overvalue quantifiable aspects of an applicant (e.g. SAT / ACT scores, GPA, rank, race / ethnicity, legacy) over those aspects which are subjectively scored and not visible on these forums (e.g. essays, recommendations) when assessing admission chances, even though the latter may be highly important for admissions at highly selective colleges.

So it is no surprise that race / ethnicity is seen as a very important factor in college admission, regardless of whether it actually is at the particular college.

I think you raise a great point. I think for some schools, it would actually be an advantage, depending on the country (such as a top liberal arts school that is trying to increase diversity from an Asian country.)

Of course, the reality is that some schools do have a high amount of students from certain Asian countries applying, making it more competitive. But I would imagine someone with Siberian heritage is not necessarily directly competing with someone of Chinese heritage, for example. The reality is that some categories are more competitive than others. But you raise a good point about trying to know more about the specific circumstances.

Yes, I know what ORM is.

Right. I didn’t and figured I wasn’t the only one.

I actually didn’t until about 1.5 years ago, hanging out on CC. Is it a term in widespread use?

(Not to go off-topic, but FGLI was another one I had never heard about until I finally realized it was “first generation/low income”.)

There used to be a thread with acronyms and abbreviations- is it still somewhere on the forum?

I think it’s this one in this same forum:

Can TO be amended to add the meaning “test optional”? That seems to be the current usage of the acronym. TIA!

People use all sorts of identifiers in their chance me threads. This one always catches my attention. I’m not sure what “ginger” has to do with anything.

I think a lot of racial/ethnic classifications are less than useful.

Whether someone’s parents are from Madrid or a small village in El Salvador, from the south side of Chicago or Addis Ababa, from Tokyo or from a Pakistani town, they all qualify as a minority student in the U.S. What unifies them is that (most) of them will appear physically different from the white majority, and thus they may be treated differently because of it.

When it comes to college admissions, I think @ucbalumnus in post #5 hit the nail on the head that the inability to see anything beyond the stats leads one into believing they are more important than they actually are. Very few minority students are getting into the Top X schools with stats significantly below the average (and if they are, they’re probably a highly desired athlete). And by significantly, I’m saying that a non-athlete with an SAT score of 1100 and a 3.3 GPA is not getting in, no matter what the student’s racial designation, even if the student is “college-ready.”

Where I think the “Asian” business comes in is when students from a highly overrepresented community (San Francisco, New York) apply to highly rejective colleges/departments, PARTICULARLY in fields that are extremely competitive (i.e. CS and engineering). Colleges only want a certain number of people from the Bay Area or the NY metro area, etc, even though those area produce a disproportionate number of very strong candidates. So when you’re coming from an extremely strong pool and going for a hugely competitive spot, anything that makes you similar to a lot of other strong candidates is a minus. Usually when I’ve seen threads with ”Asian” in the title it’s for students coming out of these areas that have a high concentration of Asian students and a high number of really strong candidates who are interested in CS. Maybe it’s coincidence, but I think the “disadvantage” that people sense is less because someone is Asian and more because they’re from overrepresented high schools and geographic areas wanting a very in-demand degree at schools that don’t have enough spots.

One of my kids is from that great Asian land mass. It made no difference to her application and acceptance. I know this because her coach submitted one application with no indication of her race and she was accepted, and we submitted an application with the ‘Asian’ box checked and she was accepted. (school created two files, two student numbers, and basically made a big mess of it). There was NOTHING on her applications except that check mark that indicated she was Asian - not her name, her activities, her high schools.

She had the exact same upbringing as her white sister (same schools, same opportunities for ECs), so IMO it shouldn’t matter at all and I’m glad it didn’t. At the school she attended, there were a lot of international students so there were Asians, but I don’t think there were as many Asian Americans as one would expect at an engineering school. Asian Americans is the number reported on the statistics, not the foreign students. Yes, there are more Asian faces around campus than the percentage reported.

I asked her once if she interacted with the international students much and she said it was too hard because of the language barriers. She had a project with a woman from Taiwan and she worked with her on the course work but said after struggling to talk with her for the project, she was just exhausted and couldn’t socialize.

Schools don’t become one big melting pot no matter what the stats say.

ORM means overrepresented majority and generally refers to Caucasian and Asian students. I’ve been here since and it’s been around the entire time I’ve been here (2014) and longer, I’m sure.

There are many different types of Caucasian people too. A Swede would appear to have little in common with an Iranian, yet both are considered White, at least as far as the Common App is concerned. The Common App only has so many options. We get kids here all the time asking which box they should check. 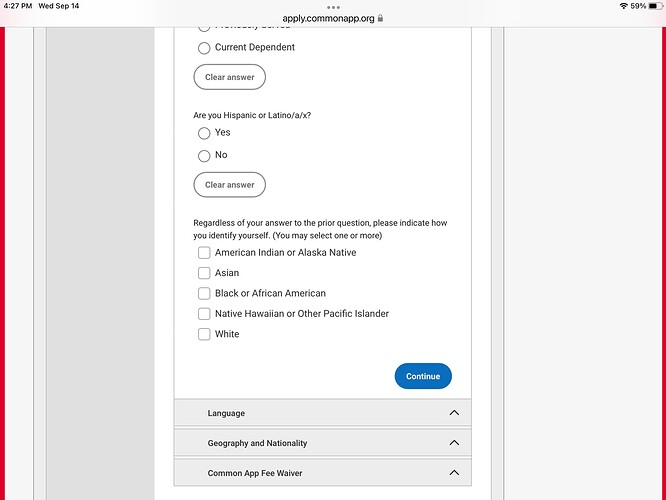 It’s all dumb. Why not just let people state what ethnicity or race they feel they are? But right now, that’s what we are stuck with.

Hmm. I always thought ORM stood for Over Represented Minority and referred to Asian students, not white.

There are many different types of Caucasian people too.

Finally, my pet peeve about “Caucasian” being used to mean White.

Asia is a gigantic continent

58% of the population of the world lives in Asia (or that is what I got when I did the math a few months ago). Most of the people I know are from Asia. There are indeed many, many different subsets of “Asian”.

And in some cases there are many different religions and many different ethnicities within even one country. I have know people from Asia who came a HUGE range of circumstances (pretty nearly as wide a range as is compatible with life).

are we sure that all colleges/universities, whether “tippy top” or not, automatically disadvantage applicants in every case because of their heritage from a gigantic land mass that consists of wholly diverse countries

I think that we just try to do our best to guess a student’s chances when they ask. This is based on what we understand from what we have each seen in our own experience, and in the experience of the many Asian parents that some of us know.

When we attempt to do our best to predict what a student’s chances are at admissions to some university, this does not mean that we either support or oppose whatever process we perceive the university as using to decide who to accept.

In all of this I am also ignoring that some of us might be 2% Asian and 2% Hispanic, given that schools will also ignore this in making admissions decisions.

I think we’re going off topic from OP’s question…

I guess my simple point is that telling a student that their admission chances are lowered by using the term “Asian” seems to be extraordinarily broad-brush. Is there a better way to phrase the responses? And are we absolutely sure that if someone is descended from a continent that has more than half the current world population that their application is automatically held to a higher standard at “top schools?”