"Asian" in Chance Me and similar threads

I think, if you multiply the number of valedictorians by the number of rigorous high schools in this country, it’s clear that you have an awful lot of kids being pumped out who all think their chances of getting admitted to Harvard are “above average”. The ones who are truly “2s” aren’t coming to CC for answers to their questions.

I’m not saying that the valedictorians are 2s. Agreed, the 2s are doing the things they need to do.

Are we still discussing Asian applicants in chance me threads, or general application strategies?

The ones who are truly “2s” aren’t coming to CC for answers to their questions.

I have seen a number of “2s” coming to CC for advice. In fact, I have seen academic 1s as well.

I guess I missed something, but how do we know that they are 2s?

And again, is Harvard’s internal categorization of applicants applicable to all other “top” schools?

And especially to @DadOfJerseyGirl 's point, is this specific to “Asian”-American candidates or to all? If it’s it to all, that’s a problem beyond the scope of the thread.

My favorite example is the push for geographical diversity. Today we see this movement as a somewhat virtuous thing: Who doesn’t want to go to a school that has students from all 50 states?

It seems more like a marketing thing for (some) colleges, so that they can get students from every state to apply.

Here is another link to an Inside Higher Ed interview. 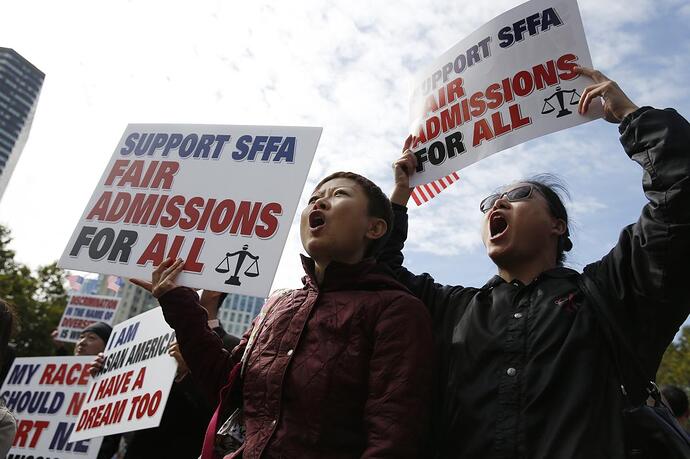 The creator of a new podcast discusses the barriers the Ivy League erected to limit the number of Jewish students in the 1920s, and how the quota system has evolved since.

I suspect I agree with Oppenheimer in that there are similarities and differences between the situations.

On the one hand, “geographical diversity” similarly impacts the chances of both Jewish and Asian populations, because both populations tend to be concentrated in certain areas of the country.

On the other hand, while the quest for “geographic diversity” may have begun as an intentional pretext/tool to keep out Jewish applicants, it is not clear that it is the current intention of the colleges to use “geographical diversity” to keep out Asian students. To some this may be a distinction without a difference, but when it comes to understanding what has been portrayed as an intentional cap to artificially suppress Asian American admissions, it seems like we have to consider whether or not the alleged cap is intentionally discriminatory, don’t we?

Another related similarity is that making admissions “colorblind” will not necessarily change the adverse impact that things like “geographic diversity” and ALDC admissions has on Asian applicants. These hurdles will all still exist, just as they still exist with regard to Jewish applicants.

But that calls into question what all this is really about? Is it to get more deserving Asian Americans into these colleges, or is it to keep African American and Hispanic students out? It rarely gets discussed here, but looking at the history of the groups pushing hardest on these narratives, it seems to be the latter.

To me, the question has always been: Why anyone would single out kids who self-identify as Asian and give them different advice than they would to any other applicant? One answer might be to steer them to colleges where they might be treated as virtual URMs (maybe, not in the technical sense, but because a higher Asian enrollment would check a lot of boxes for that particular college.) Personally, I think it’s better than telling them that the system is rigged against them.

For the second time, move on from debating the Harvard lawsuit, including, but not limited to, Harvard admissions statistics, adcom rating scales, etc.

This is not a paraphrase from me - these are Oppenheimer’s words.

I see. If it’s a private or unaffordable public, then parent can say no pay. As I said, if it’s an affordability matter, then that is reasonable.

What biases and stereotypes? The poster to which you responded outlined two contexts for the scenario you brought up. Both occur, and we don’t have to resort to stereotype to understand that. Easy to understand.

Thanks for sharing the Inside Higher Ed article, @mtmind.

This made me wonder whether AOs today are looking for the “right” kind of Asians, those who behave more like white Americans (here, I am thinking of Asians being given lower personality scores than white applicants as mentioned in the Harvard lawsuit) and pursue more conventional ECs (team sports vs. classical music, debate and drama vs. STEM competitions).

On the former, my D22 recently showed me a New York Magazine article on the “bamboo ceiling” that Asians face (we’re Asian) and one part I remember was the discussion on how Asians are perceived to be uninterested/aloof because they listen more than they speak in class, business meetings, etc. I mention this as an example of how Asians (and other minorities) are judged by the mainstream cultural norms and perhaps this extends to college admission.

On a broader point, I believe a society needs its inhabitants to share certain commonalities in order not to fracture and this requires, among other things, for newcomers to assimilate to some degree.

That said, perhaps the pursuit of diversity at elite colleges is more superficial than we’ve come to believe.

There are onshore and offshore college counselors that market themselves as being able to de-Asian their Asian/Asian American clients. Progress will be made when this is no longer a thing.

That said, perhaps the pursuit of diversity at elite colleges is more superficial than we’ve come to believe.

That is one of Oppenheimer’s points. And I believe he is well aware that many of his statements can be substituted with “new overachiever immigrant.”

I was at the memorial service for a brilliant physicist today that I had the privilege of working under for a while. He was instrumental in my career development and the career development of countless others. I thought of this thread briefly while listening to the stories about him. His scientific accolades were significant but what made him stand out as a human was the quality (and quantity) of selfless mentoring he afforded everyone he interacted with. I see the chance me threads as a type of mentoring, anonymous and brief as they may be. I urge all of us to see this opportunity to mentor these young humans not in the context of our scars and current limitations but in the context of the better world that we would like to see them create. I know it’s a big ask of myself and everyone else but I ask it nonetheless in memory of a great physicist.

I apologize for the heavy emotions; it’s been a difficult day. And BTW he did not go to a T10 or T20 school for undergrad despite being a top student. It happens more often than not.

This made me wonder whether AOs today are looking for the “right” kind of Asians, those who behave more like white Americans

Consciously or not, stereotyping others from different cultures or backgrounds permeates every segment of any society, AOs can’t be exceptions.

I hope not. I hope AO’s aren’t stereotyping Asian Americans, white Americans, or any student.

I too hope not. But then we have these highly paid private college admission consultants advising Asian applicants “how not to be Asian” (don’t play a sport or an instrument that is viewed as stereotypically Asian; show a passion for the classics instead of cell biology; etc). And these are by and large ex-AOs from elite schools so this suggests there may be some level of unconscious bias perhaps?
Why else advise kids not to be themselves? That just makes me sad whatever the underlying rationale is.

Close friend’s kid, Asian, went to top boarding, advised and applied as a Classics major. Translated from Latin one summer for a LAC professor. Got into S & H and a few more. This is how it is done if you could do it.

Close friend’s kid, Asian, went to top boarding, advised and applied as a Classics major. Translated from Latin one summer for a LAC professor. Got into S & H and a few more. This is how it is done if you could do it

Was the student truly a classics major, or was classics an admission Trojan horse for a student who switched to some other major upon entering college?

Admission Trojan horse majors are not limited to Asian students, but they can backfire if the actual desired major is full at the college and requires another admission process to get into after enrolling at the college.