South Korean Americans’ focus on education is embedded in their culture both here and in their native country. That culture is not limited to those who immigrated to the US.

I agree with you on the influence of parental educational attainment. Immigration, particularly from India, is highly selective. On the other hand, immigration from another big source, China, is much less selective. There’re significant number of Chinese immigrants from less educated background, but many of their children have done much better educationally all over this country.

Not only do districts vary within a given state (some excellent public schools and others that are so horrible they are run by the state rather than local school district and everything in between), but school systems around us vary within the same district. My kids and their cohorts got extremely good public school educations (and the results post-secondary have shown that). But many of the kids in the same school district got mediocre educations. Same schools, teachers, funding, etc. Just a question of education being a priority for them. It wasn’t for all kids. Family issue what what I have seen. Its really tough to do well in education if its not a priority.

Mostly yes, but it has also been my observation from my multiple interactions with and work related travel to China, Singapore and India that people there do seem to place a very high value on academic achievement.

But when you travel for work, do you interact mostly with people in jobs that require high education? That can itself be a biased sample of the population.

I agree with you on the influence of parental educational attainment. Immigration, particularly from India, is highly selective. On the other hand, immigration from another big source, China, is much less selective.

while about 50% of immigrants from China have bachelor’s degrees

My point is that you need to also look at the other 50%. They’ve done better educationally than expected based on their parental educational attainment.

There was an article a few years ago where Stuyvesant High School was 75% Asian but they also represented 90% of free lunches within the school.

Im not sure who these Asian parents are with advanced degrees where their kids qualified for free lunches because they were low income. 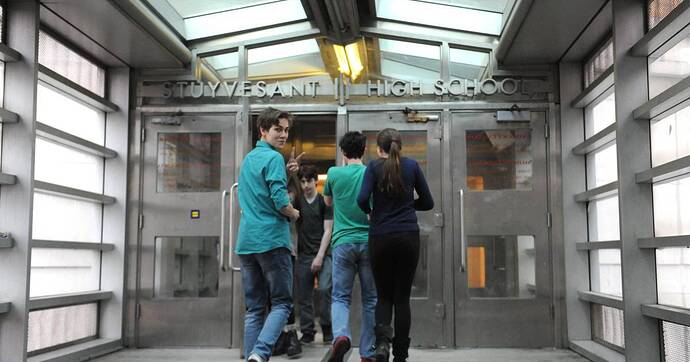 We all agree that the latest admissions statistics for New York City’s specialized high schools are unacceptable.

I’m sure some of this is parental input and possibly parental genetics. Eastern Massachusetts has a very high proportion of highly educated parents who went to/work at the many universities there (higher education is one of Massachusetts largest industries), in biotech firms (Cambridge, MA is the epicenter of the world’s biotech industry), consulting firms (think Boston Consulting Group and Bain among many others), etc. Parental involvement in both the public schools and the private schools that I observed was quite high.

Parental involvement will likely help when the parents are supportive of the school and will hurt when they are undermining its basic educational objectives. I think the school systems that I see (albeit affluent ones) could be a lot better than they are. So there is lots of room for improvement. I suspect that the amount of time, effort and money spent on high school sports could better used to advance education. (I say this as a minor sport athlete in HS and college so I’m not against sports). Although it would be hard, I’m sure a rethink of what we want students to be able to do (as opposed to what they covered in class) would help. I would like schools to help students be able to draw conclusions from data in a logically valid way, to be able to reason clearly from premises to conclusions, and to be able to make sensible financial decisions. I was talking to someone in Colorado whose school (or state) mandates a unit on financial decision-making to graduate, but when she looked at her town’s curriculum, it was some trivial stuff about spreadsheets and did not deal in any way with financial decisions.

Another MA factoid is that it has both the highest average age of marriage (~24) and the lowest divorce rate. So MA kids tend to come from stable families with more mature parents. MA is also the most educated state.

What state has the lowest average age of marriage (~17) and the highest divorce rate? Indiana.

Didn’t New England have an early (1600s) emphasis on universal compulsory education for literacy, so that people could read books like the Bible?

In contrast, some other regions did not get to that point until centuries later. Perhaps current differences are still partially a legacy of historical attitudes toward education.

Maybe. First public school was Boston Latin 1635. It’s still around as you may know. No where near as highly regarded as it used to be. But still a great school. It’s more likely, however that Horace Mann has the most lasting impact on MA schools. He based the educational system on the Prussian system.

Named secretary of the new Massachusetts board of education in 1837, he overhauled the state’s public education system and established a series of schools to train teachers.

MA’s historic legacy related to education surely exists, but it seems that one could better explain why MA has a high ranking in this survey by looking at the level of educational attainment of adults in MA and family income. Both parental income and education are related to higher levels of student achievement. The adult population of MA ranks first in educaitonal attainment in the US and median family income in MA is third highest in the country. There are still lots of underperforming school districts in MA–Lawrence, Holyoke, Southbridge–to name a few.

Yes, I agree. I think parents often set the standards for education. I was responding to the earlier post about the Pilgrims (historical context) butI think it’s a combination of factors. Today, it’s mainly centered on the number of colleges and Universities and the parents educational level.

MA’s historic legacy related to education surely exists, but it seems that one could better explain why MA has a high ranking in this survey by looking at the level of educational attainment of adults in MA and family income. Both parental income and education are related to higher levels of student achievement.

In states, whether northern or southern, many of the affluent tend to congregate in the same areas. The affluent tend to have higher education levels and, by definition, higher economic means. If they are in a northern state their affluence allows them to pay high property taxes on high value properties (or significant “donations” to their schools to improve them) and get a very high quality education. The affluent in southern states pay for private schools if their child doesn’t test in to a quality magnet school.

A retired teacher/colleague of mine moved from MA to GA so his wife could be closer to family. In his county, only families with kids in school pay taxes to support the schools—as a retired person, he is not charged that portion of his property tax.

The way I look at it, when my kids were in school, those without school-aged children helped foot the bill to educate my kids. I haven’t had a kid in school in years, yet I have no objection to doing for the young families what was done for my family, we were younger.

MA is a “commonwealth”, so we should do things for the common good, right??

What state has the lowest average age of marriage (~17) and the highest divorce rate? Indiana.

These numbers don’t seem right. I couldn’t confirm them. Actually found a source that said Indiana average age of marriage is 27 women and 28 for men. Mass is 29.7 for women, 30.9 men.

What Is The Average Age Of Marriage By State In The U.S.? | Regain

A retired teacher/colleague of mine moved from MA to GA so his wife could be closer to family. In his county, only families with kids in school pay taxes to support the schools—as a retired person, he is not charged that portion of his property tax.

That is both incredible and terrible that people in any community would opt out of supporting their own schools, regardless of whether they had children currently in the system. Even if one is childless, that seems breathtakingly selfish and short sighted.
I wouldn’t want to live among people who think that way.

Doesn’t the whole system of using property taxes to fund local schools lie at the root of problem of inequality in K-12 education, and perhaps far beyond education?