Brouhaha about Free speech at UChicago

Colleges and Universities University of Chicago
surelyhuman December 3, 2020, 10:13am #1

Here is s summary of what happened 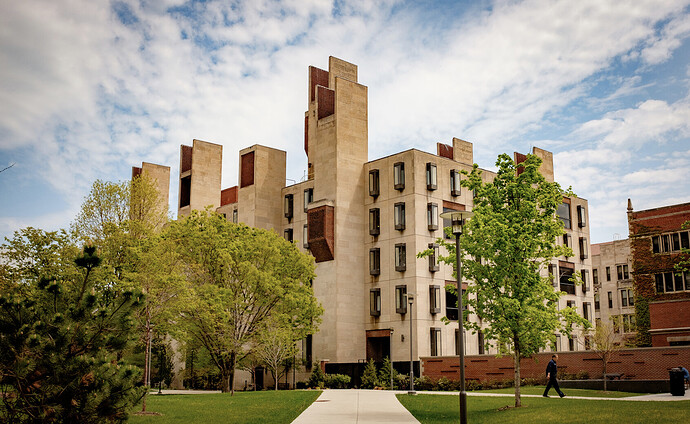 At UChicago, a Woke Inquisition—and a Warning

On a college campus, there are some moments when liberal reality seems more like conservative satire, as if screenwriters were scripting the lines of some students just to humor the right wing. One such moment occurred recently at the University of...

To: Members of the University Community From: Robert J. Zimmer, President Re: Statement on Faculty, Free Expression, and Diversity Date: November 29, 2020 From time to time, faculty members at the University share opinions and scholarship that...

And where at least some faculty aren’t too intimidated to speak their minds. If they are wrong, let the evidence speak rather than some dumb petition.

Still, it was disappointing that 150 or so signed that dumb petition, which was full of the fashionable cant about “harm” and “safety” coupled with the obligatory list of “demands”, which included cancelling the wayward prof in a multitude of pettifogging lilliputian ways.

I read the posts of Professor Abbott. His argument in favor of meritocratic hiring of faculty and acceptance of grad students was cogent but refutable. It was tenable but not indisputable. He offered statistics, but those statistics may have been flawed. Perhaps he left other important considerations out of the statement of his position. These are all things that ought to have been addressed by his critics. But they preferred to send him to purgatory - or at least to Coventry - for the sin of stating a position that had previously been the policy of the University. Perhaps it is no longer the policy, but one policy at least remains: Nothing is holy at the University of Chicago except argument itself.

Luckily, there are still adults in the room, and, more importantly, adults who are willing to apply the true UChicago principles. There will be no excommunications of heretics on Zimmer’s watch. Nevertheless, I tremble when I think of the time coming when these 150 true believers - now mostly grad students and post docs - become responsible for policy at this university and many another.

Professor Abbott has now written a piece describing his experience.

This is interesting advice on how to survive when a mob comes for you. Abbott makes tactical suggestions (e.g. mobilizing your own supporters), but I especially liked his invocation of the perennial virtues of determination, courage, and love. The professor may have been re-reading some old HUM texts.

The appeal to the last of these virtues was at first blush, however, a bit surprising. Huh? You see yourself being viciously and unfairly attacked on all sides, and that is how you respond? Is this just a Christian-sounding piety? Possibly, but it also seemed to me to be very much in the argumentative spirit of a university, in which those one disagrees with are viewed as potential interlocutors, not simply enemies without any tincture of the truth. Even an isolated targeted individual ought not to write off his attackers as being simply dead wrong and malignant. Like Socrates he should want to talk to them, not damn them. As Abbott puts it, “If a mob starts attacking you, remind yourself that this mob is composed of human beings who are themselves worthy of dignity and respect…”

In a time of crisis all the virtues are needed, be they pagan or Christian. I would add to these ones the healing sense of laughter: the behavior of all of us has in it at all times a good share of the comic and preposterous. Whether attacker or attacked, no one is entirely composed of nobility.

Abbott is also fortunate, as he himself admits, in a more mundane way: “I am lucky to be at the University of Chicago, which has a long history of defending academic freedom, in large part thanks to President Zimmer… I also recommend getting a code such as the Chicago Principles adopted at your institution if possible, so administrators will have something concrete to point to in a crisis to justify not firing you.”

The link isn’t working. Unless the page was already removed

Just google Quillette.com and scroll down six or seven articles or so.