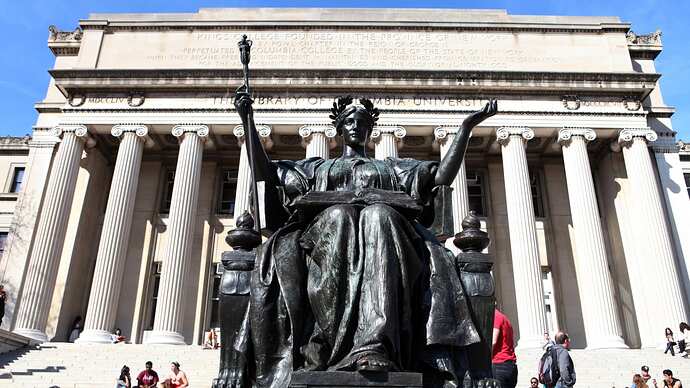 The University of Chicago cinched the top spot on the Foundation for Individual Rights and Expression’s annual list.

Understanding what FIRE stands for, that ranking likely indicates Columbia is actually one of the campuses that most disabuses bigotry and harmful language against protected classes. Not quite the same thing as being “against free speech.”

When my D started out as a senior in high school, her first choice college was Columbia. Her criteria included a strong program in her intended major AND being located in a big city. Given that she loved NYC, she expected to apply to Columbia ED.

But just a few months later, Columbia completely dropped off her college list. And the main reason for that was what she perceived as a highly dysfunctional political climate.

He was found not responsible by a university inquiry. She then filed a report with the NYPD but the attorney general did not pursue charges saying there was no reasonable suspicion. After going 0-2, she then decided to carry a 50-lb mattress around for the rest of her time at Columbia as a work of performance art to remind everyone that she was “raped”. Many Columbia professors supported her despite a lack of evidence, and she was allowed to carry the mattress during her graduation ceremony to further publicize her view. And during this time, Paul was outed as the “rapist”.

Eventually Nungesser filed a Title IX gender discrimination lawsuit against Columbia which was settled out of court for an undisclosed sum just prior to discovery, with Columbia publicly admitting its mistakes in handling the case.

In summary, what was wrong with Columbia at the time is that many there thought they “knew the answer” without actually asking the questions. Based upon the FIRE report, it sounds like it still remains dysfunctional.

By the way, my D attended UChicago instead. She found the relatively free expression there to be exhilarating.