Curious about how others are feeling about "canceling" student loans

I have very mixed feelings about this. And I’m wondering how canceling past debt protects students in the future from accumulating the same crippling debt. How does erasing the past fix the future?

The most a student can borrow for an undergrad degree is $27,000, I don’t think that is crippling, I’m not in favor of loan forgiveness (even though my kids have these loans), but I don’t think forgiveness would send them on a spending spree. I am in favor of making public college more affordable for the middle class, who may not have saved up $100,000 for each child, but also isn’t eligible for FA.

In terms of fixing the future, perhaps there needs to be some way of keeping student loans and Pell grants away from the predatory degree mills with very poor completion rates for degrees that are widely seen as worthless anyway.

I am in favor of making public college more affordable for the middle class, who may not have saved up $100,000 for each child, but also isn’t eligible for FA.

Students loans can only be shifted, they can never be canceled.

Someone always has to pay.

My concern exactly. The debt will be shifted, the student loan industry will continue as is, colleges will charge what they charge. I don’t see where this ends.

I’m in favor of cancelling up to the max amount of fed loans - and providing that much free to students in the future (college or trade schools).

I see it as a great way for the US to invest in our collective future. Those with good jobs end up paying more in taxes than they have used along with improving their lives. It’s a win-win.

If one wants more than the max amount, that’s on them.

I would be in favor of that as well. I’m not in favor of only looking back on past debt and “canceling” that only.

Agreed. While that would be an investment, it’s a minimal one compared to continuing to help people reach their potential. So many where I’m at can’t afford to do much, even if capable, and end up in minimum wage (or close to it) jobs when they could have done more - or they end up with loans. Low wage jobs often come with various benefits that the gov’t is paying for anyway.

Help those who can and want to get better jobs and get tax income instead. It’s a great investment, beating welfare(ish) things. Mid 20s would provide for trade schools, community college, many in state options, or go toward pricier places if someone felt those were of more value to them. Having it available to all would get rid of the “it’s not fair that they get it” bit - akin to free K-12 education.

Even people without kids would be paying in, but having an educated, taxpaying workforce helps all of us.

If the increased lifetime earnings are not enough to repay $50k or less in loans, something is wrong with the process. And if you have more than $50k in loans and cannot repay them, you should look at what other options were available. Magic pen wiping away that debt is addressing a symptom but not the problem. And in many ways it will make the problem worse.

Wouldn’t “cancelling up to the max amount of fed loans” simply shift that burden to the U.S. taxpayer? Why should I (and others) have to foot the bill to allow someone to go their “dream school” at a reduced rate? I went to the public university that my parents could afford – not my “dream school” by any means – and I took advantage of the opportunities that I was presented; and it worked out just fine in the end.

The answer to running up a lot of debt to attend college is to stay within your financial means when funding a college education – and if this means attending a community college for two years before transferring to another school, then that’s what you need to do.

Further, if the federal government forgives or writes off student loans, then what is the incentive for colleges and universities to rein in tuition/fees/room/board? The answer is, They have no incentive because the forgiven loans are simply free money to them; and so the costs of a college education will keep spiralling out of control.

It would also help to eliminated the “tax bomb” that is triggered if you earn forgiveness by doing some of the income driven plans for 20 or 25 years (outside of PSLF). I think outright cancellation should be limited to cases where schools (mostly for profit ones) rip students off and don’t deliver what they promise.

If the increased lifetime earnings are not enough to repay $50k or less in loans, something is wrong with the process.

What’s wrong is this only affects the poor, or in some cases, middle class kids. It keeps the “favor” toward those lucky enough to be born wealthy (or those who get free rides) when they don’t have to pay off loans at the end. If we want to break poverty cycles, we have to actually try to do that, starting with those who are capable of doing more via college or trade schools.

I also like seeing public schools devote more to teaching trades including up to the level of getting certified for jobs that used to require post high school education. Same investment, but this time for equipment and staff.

Wouldn’t “cancelling up to the max amount of fed loans” simply shift that burden to the U.S. taxpayer?

The choice is more of would you rather support educating someone capable to make them a taxpayer or subsidizing their rent/heat/food, etc. I prefer the former.

I went to the public university that my parents could afford

Many kids can’t afford this. It’s a large segment of society, though not often found on CC. They aren’t looking for subsidized dream schools. Given a choice of free vs loans, IME, many will choose the free option in the same way many will choose a used Ford over a new dream car with loans.

if the federal government forgives or writes off student loans, then what is the incentive for colleges and universities to rein in tuition/fees/room/board? The answer is, They have no incentive because the forgiven loans are simply free money to them; and so the costs of a college education will keep spiralling out of control.

I don’t see this happening. Once something is available for free (CC or in-state) the vast majority will choose that over having to pay a considerable amount for the same thing. The vast majority of students now already choose public vs private. Private colleges will have to look closely at how much they can charge - or pretty much cater to the wealthy - just like private K-12 schools do now.

Again, one would never guess if their only source were CC or coming from private K-12 education, but here’s the stats for public/private colleges in the US:

There were approximately 19.6 million college students in the U.S. in 2018, with around 14.5 million enrolled in public colleges and a further 5.1 million students enrolled in private colleges. 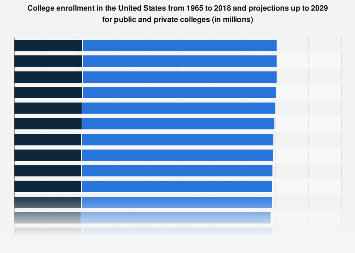 Public colleges in the United States were forecast to enroll nearly three-quarters of the 19.75 million students in 2020.

I agree with much of what you’ve shared. The public (in-state) universities we’ve encountered in our college search have tuitions that easily rival private institutions. Without stricter regulation of the public institutions, offering the federal max amount wouldn’t cover the cost of in-state tuition. And what’s to prevent public (and private for that matter) universities from driving the cost up higher now that federal loans are “free” resulting in the same net cost for students and their families?

In our state, two years of community college is free, so long as you keep your grades up. And there are a wide variety of public universities that no doubt have varying tuition/fee schedules. And, there’s always the option of working full-time and saving up your money to afford school – as I did for my post-graduate degree. And there’s also the G.I. Bill – or whatever it’s called now – which will allow one to pay for school, in return for service in the armed forces.

So I think it can be done, perhaps just not with the ease or convenience that one might like.

What’s wrong is this only affects the poor, or in some cases, middle class kids.

Doesn’t matter if you are rich or poor. If you had to pay cash for school it would. But there are grants and loans. Comparing what you would earn without a college degree (minimum wage essentially) to what you make with one, someone with a college degree should be able to service under $50k of student loan debt. To me the bigger issue is the number of people who apparently cannot do that.

I agree that we should do more with trade skills/certifications. I would start that in high school. We should do a better job in K-12 rather than adding an additional 2-4 years by default.

There is a lot of talk about forgiving student loans as a way to stimulate economic growth. Amounts not paid on loans can be spent in other ways. But that is true of all obligations. If people didn’t have to make mortgage or car payments, credit card bills, utilities, etc., they could spend that money on something else.

In our state, two years of community college is free

And this type of thing is what I’d like to see everywhere. Since you’re paying for it now in state taxes, those should lessen if it were to go to federal.

And, there’s always the option of working full-time and saving up your money to afford school

No, there really isn’t that option now - not to the same extent it was when we were younger and not to the level it would be if students could get the degree at a younger age allowing them to be higher taxpayers sooner. From what I’ve seen many who opt to work to save for college don’t ever get there. A few do.

there’s also the G.I. Bill – or whatever it’s called now – which will allow one to pay for school, in return for service in the armed forces.

The armed forces don’t take everyone. They don’t even take many who want to choose them even without the “pay for college” aspect.