Economics programs with a behavioral lean?

Background: I have a daughter who has been laser-focused on majoring in economics with a minor or maybe second major in philosophy since third(!) grade. She’s asked me to help her with looking into colleges that provide the type of economics she’s after, which feels like kind of a niche part of the field (though maybe not, I’m not an economist), so I figured I’d query the CC hivemind.

The main thing is that she isn’t interested in economics for the business side of it (except as far as that provides a shorthand for her interests), she’s after economics as a means for determining why humans behave as they do given the various competing items of value that they have to balance, especially regarding emotional-ish issues such as happiness or determining what counts as ethical. (And yes, I know, that sounds like philosophy—but she’s interested in quantitative approaches more than qualitative ones.) Basically behavioral economics, but what feels like an odd corner of behavioral economics.

She realizes that this is the sort of thing she probably wouldn’t be able to pursue til grad school, but she doesn’t (nor do I) quite know how to sift through all the undergrad econ programs out there to know which ones would give her the best base for that sort of graduate work. (Oh, and it would be a strong bonus for her if she wasn’t constantly faced with “The invisible hand of the free market will solve everything!” dogma.)

So after all that, for people who know the econ landscape, what sorts of programs should she be looking for? If you have specific colleges to suggest that’s appreciated, but maybe more useful would be knowing what characteristics someone with her interests and goals might want to be on the lookout for to avoid.

I’m not “in the econ world” but I keep up with it and my son is an econ major. From what I have gleaned, I think the “meat” of what she’s looking for, as you describe it, will probably be found in graduate school. However, many universities offer Econ as a major in both the Business School and not.

Ostensibly, it might sound like she should focus on majoring in Econ as an Arts & Sciences (or Humanities) major. My limited insight is that she still may wish to take Econ as a business major because some colleges issue BS degrees for the business Econ students as opposed to a BA for humanities students. Part of the BS is a more math focused slant to the degree. If your daughter is already strong in math, I’d lean toward the BS because it will prepare her better for a graduate degree in Econ.

Good luck to your daughter.

Pretty much any true economics major (that is not a modified business major) will have the following requirements:

Beyond math intensity (more math intensive is better if planning to go on to PhD study in economics, but even more math like real analysis is recommended for that), the selection of upper level economics electives in her area of interest is probably what she wants to look for in college catalogs.

Undergraduate Economics is still stuck in heavy math/ theoretical Economics. (see Why Econ Classes Barely Mention Behavioral Economics - The Atlantic) So you’ll get a strong background in classic economics and be able to take maybe 1 or 2 courses in BE. Then you can focus on it in grad school.

Having said that, Carnegie Mellon has a relatively new BE program. Wharton offers a BE concentration. Northeastern has interdisciplinary majors and the Econ/Philosophy major is closest to BE. Or research the top professors and try to conduct research with them while an undergrad.

If this were my kid, I’d encourage her to explore any college where she can toggle between psych, poli sci and econ, with a strong dose of statistics and applied math. So Brown’s interdisciplinary approach with a strong econ department plus the other things?

If she’s in a true econ department (i.e. not stuffed with kids who just plan on wall street careers and aren’t really interested in econ) then the invisible hand stuff won’t bother her. There are a lot of different theoretical frameworks in economics- just like any social science-- the central banks in communist countries employ economists, and they have markedly different views on what’s important vs. someone in a wholeheartedly capitalist system. So there is no one right answer- just a lot of theories, and she’ll likely find them fascinating. Some do a great job of explaining complex phenomena, some only work in retrospect but aren’t so hot predicting the future, some will strike her as materialistic and others too altruistic. The stuff she’s interested in can be interpreted through different lenses-- why did China’s One Child policy work for so long- and then not? Why did India and Brazil experience different shifts during industrialization, and what does that tell you about the cultures and sub-cultures, and the societies in those countries? How does our mythology about the Pilgrims and other early European settlers help or hurt our understanding of their motives in conquering/wiping out the indigenous populations and exploiting the natural resources they found? There are behavioral economic theories which try to explain all of these…

I don’t think she has to wait until grad school to do the kind of questioning and learning she wants to do- but she does need to find a college where taking courses in several disciplines to patch together her own program is not going to be too hard. Look for open curricula, look for a place where students don’t get pigeonholed early on, look for either an econ department, or philosophy, or poli sci, or psych department where students say that it’s easy to find a faculty mentor for a senior project/thesis even if it’s outside of his/her comfort zone.

Your chances of finding colleges with faculty who have wide-ranging interests will be greatest among the higher ranked departments in these analyses:

With respect to your daughter’s objectives in particular, she may want to consider whether her interest in behavioral economics might overlap with an interest in experimental economics, as the two subfields tend to be linked. In any case, as she further defines her interests, she can research faculty with matching areas of expertise.

For related reading, this article focuses on happiness research:

It sounds like she’s interested in Behavioral Economics. While its tough to find an undergraduate major, there are a number of schools with institutes and graduate programs in the field. Those schools usually have undergrad classes and some have opportunities for research. If you google “behavioral economics college” or similar terms, a number of institutes and programs come up.

Two that I’m most familiar with are: Richard Thaler at University of Chicago (Nobel prize in 2017) and Dan Ariely (at Duke) wrote “Predictably Irrational” which is a great intro to the subject.

Another possibility is schools that would allow her to combine cognitive science with economics or develop her own major.

If this were my kid, I’d encourage her to explore any college where she can toggle between psych, poli sci and econ, with a strong dose of statistics and applied math.

To pick up on this thought … some universities offer an Econ major focused around Philosophy and Politics, PPE. For instance Drexel has a PPE major, as does U Richmond (expanded PPEL to include Law), U San Diego, and many other, including public Unis like UNC, Michigan, Arizona.

One of the beauties of Econ is it can lean in whatever direction your daughter chooses.

Look into the Honors College at University of Houston…she may be able to craft her minor to address the behavioral aspects to go along side a major in Econ.

Just wanted to say thanks for all the input, y’all—this has been most helpful.

I was just sent some unsettling information (screenshots of a lecture) about what is being taught in some Econ classes at Lehigh. It’s likely that this will not be unsettling to some families, but as a family of color, it’s enough to make me think twice about recommending the school for now. 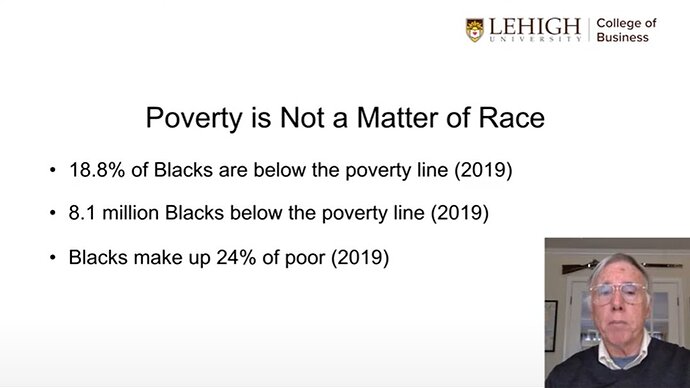 Economics Professor Frank Gunter is facing criticism over claims made in his most recent quarterly op-ed titled "Three Myths About Poverty."

I was an Econ major, my daughter was an Econ major, graduated in 2019 with a minor (nearly a second major) in math. She has been working doing economic research and is in the PhD application process now. She was introduced to concepts of behavioral economics in her first college Econ course (LAC in Texas) so the concepts are at least showing up in undergrad there were no classes per se in behavioral economics and no professors with that specialty at her small college. . She has found that a strong math background is important for grad school in Econ, and as another poster mentioned, real analysis is expected prior to admission at at least some of the schools she has applied to.
I agree that a school where she can major in Econ (preferably a more quantitative variety) and still have room to explore related areas would be great. My D was not in a quantitative program so used the elective space in her schedule to take math and more math. Some programming is great as well (I’ve heard her mention R, Python, and others). She did a summer REU where she learned to program as she had no background there prior to college or in her major coursework. She uses all of this at her job as a research analyst working with economists, and it’s all important when you make that application to grad school.
There’s more than one way to pull it all together as my daughter did, but if you know what you’re looking for I’m sure it’s possible to find it all in one place as well. I asked my D and she said you’d probably have to go where the professors are. I was curious and did a quick google search and, interestingly, as you scroll down the list past Harvard, Yale, etc, there’s a few business schools that pop up- UCSD Rady school of management and University of Arizona Eller school. I’m sure there’s more. The suggestion to check course catalogs for undergrad elective offerings is a good one as well.

At a smaller college with professors with a special interest in this economics sub-area, a student may find perhaps three courses specifically in behavioral economics.

Colby could be worth a look. They have courses that would meet her interests and she could easily pursue philosophy or other social science topics with it. My kid’s interests were along similar lines and he found plenty to keep him engaged both in and out of the economics department. I’d look carefully at the requirements for any major. As mentioned by @merc81 , programs vary in terms of math requirements as well as "foundation " classes and colleges have different graduation requirements.

@HMom16 Carnegie Mellon has a great BE program under Dr. Lowenstein who has worked with Thaler. University of Pittsburg also offer dual major in Economics and Psychology.