Going by the median grade for my kid’s humanities classes, there has been some grade deflation since then.

English was my kiddos challenge this trimester. The only class she was 1 point under the median, and about 7-8 points below her typical English grade. I do have to say I really love the thoughtful comments from all of the teachers. So very different from the check a box comment on public school report cards.

At Parents’ Weekend a few weeks ago both History and English teachers mentioned that they are discovering that current freshman writing ability is slightly behind what they would typically expect from the incoming class.

They suspect that it is because middle schools may have dialed back writing assignments/teaching during the pandemic. Perhaps that it why my kids median English class grade is so low.

Not just middle schools. Mine is a repeat Junior. She transferred to a cyber charter last year. They did not even write a complete paper until January. And it was an advanced class.

Here is a report from teacher survey on the topic 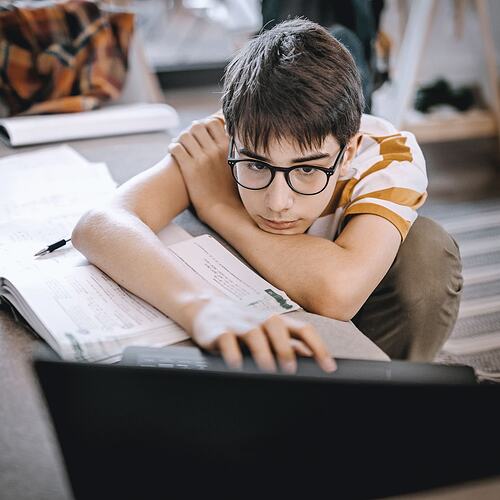 While the education response to the COVID-19 pandemic has varied widely, teachers agree on the high cost of learning loss, especially for vulnerable students.

Here is more to dig into about DIG!

One of the complaints some students have is how certain teachers at DA use a computer program or APP to track class participation. As you know “class participation” is a significant factor in grading (sometimes as much as 20%). The problem with this app/program tracker is that it tracks the amount of time a student speaks up NOT quality of what was said. My kiddo has noticed that certain students (use your imagination) are arrogant Harkness Hogs who jump in and dominate time with much to say (usually their opinions rather than facts). The students with the most time calculated may have participated “the most” because the teacher does not shut them off. These students often say a lot, but with little substance. My kiddo has observed that these bombastic students tend to be males from affluent families. By contrast, the students whose messaging is brief and to-the-point are scored lower. Yes, this is a generalization (so sue me) but it is the observation of my kiddo and several classmates who are female that this APP/program favors boys by its design. Several females we know received lower participation grades based on the amount of time tracked, rather than the quality of their statement. At DA, it has been observed that females tend to be less likely to spend a lot of time dominating the table conversations at Deerfield (see January 1, 2019 Boston Globe article on “Better Dead Than Co-Ed”). Why is the school using such a biased form of tracking class participation?

BTW…I am fairly certain that if you ask about this during Revisit, the faculty will deny that they do this….DM me after May 29 for details on which faculty members have used this system.

Interesting…it seems like the teacher would override any grades that are computer generated if they do not reflect the actual contribution from the students.