How can I improve my ACT score?

I took my junior ACT in March and got a 30 composite - 32E, 28M, 29R, 31S.
I have the opportunity to take it again for free in July because of a club I am in, and I am just looking for resources (books, online, tutoring programs, etc) and any advice on how to improve at all. Thank you !!!

Congrats on your score. Hit the library - find a current prep book like Barrons or study the Khan Academy on your own. If your parents can afford $600 or so - tutors will teach you the tricks - we sent our daughter to a 6 session, $90 an hour place - and her score went up 3 points. My son’s 4 points.

30 is a fine score, though, and will hep you well in admissions.

My kids’ private tutor was only $60 an hour, well worth it, scores definitely improved.

Read this review. Lots of very useful information here. Amazon.com This is the advice that my son followed, after having scored in the low 30’s on a practice test at home. He got to a 36 overall (36 in everything except 34 in math) with I think about 60 hrs of self prep, mostly in math. We only got the recommended math prep books (Best ACT Math Books Ever), and a slightly out of date Official Guide to the ACT prep book, for the 5 retired ACT practice tests in it. I also downloaded legally released retired ACT tests that were legally in the public domain, but frankly, it was overkill. The 5 in the book were possibly enough.

The “science” section is really data interpretation, and for that, practice makes perfect, by doing practice sections. The English section he knew just by virtue of having been raised in a house with parents who spoke correct standard English, and having read a lot. But if practice tests don’t point out to you the grammatical errors that you’re making, or help you to learn what to focus on in the reading sections, get the prep books recommended in that review I gave you the link to.

Math was what he really needed to focus on, and honestly, all that prep he did only seemed to bring him up from maybe 31 in math to 34 in math. He said he just didn’t have enough time on the test. After he started BC Calc class, he said that what he was learning in Calc would have helped him to get a 36 on the math, because it allowed him to do certain problems more quickly.

We did not obtain professional tutoring. I think that could have helped him with the math, too, but it didn’t really matter for him.

I do recommend getting a slightly out of date version of Official ACT Prep Guide for the convenience of 5 printed retired ACT tests with explanations, but you can probably find all of them online. Don’t get more than one year’s, because they only change one of the 5 tests in it per year.

I think that you are actually in an excellent position to get to a 34 on the ACT, even without professional tutoring.

I would not encourage seeking out for prep classes or private tutors because plenty of people score 33+ without shedding a dime from their bank account (except maybe prep books). There are tons of free material for you to use, whether it be on the internet or in your library.

Since you’re taking the ACT, guess who knows the questions best? The ACT. If you haven’t already found out, they provide free practice material on their website, including questions, feedback, and raw scores. So definitely check that out.

I studied with only the website and a prep book 1-2 days before my exam and scored a 35 composite first try. Maybe I was lucky, who knows.

Sent you a private message.

I have prepared a video on how to the ace the ACT, and maybe it can help you out. Feel free to DM me on insta for any further questions. 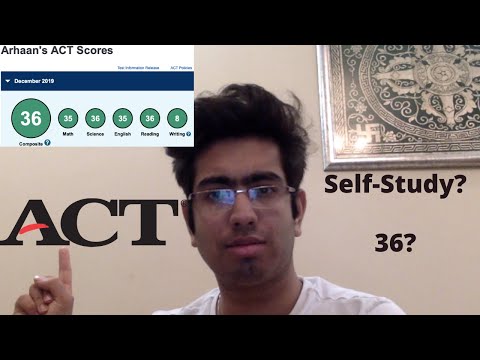