King’s College London in the US

But it probably depends what kind of flexibility you’re looking for.

Tried to conduct a similar crude and simple analysis for postgraduate applicants’ thread chats. I quickly found that this was a far smaller pool.

Only the following universities have more than one page of chat, if at all, so far:

I think this adds to the argument of prestige amongst students (if one combines both the undergrad and postgrad tables).

It is quite clear that the Golden Triangle are top, with Durham and Edinburgh having a strong case to be included in that same bracket locally.

Coincidentally (or maybe not), these 8 universities are exactly the only ones Oxbridge students regarded as peer universities with Oxbridge in the post I made in #34 on this thread.

They also heavily align with my perception of prestige and reputation of UK universities that I posted on another thread last year:

By the time one looks at international reputation/prestige of the universities, then Durham definitely drops a peck from the group.

The major surprise in the postgrad table is Manchester, which I expected to be more prominent in the postgrad space. This just confirms my repeated argument that despite its alumni successes and high rankings in international league tables, it lacks on-the-ground local prestige, just like NYU lacks in the US despite its alumni successes and high global rankings.

Looking where Marshall Scholars select to study in the UK with their 2/3 year scholarships can also give an insight into how UK universities are perceived in the US.

The Marshall Scholarship is a postgraduate scholarship for the most highly intellectual US students and is one of the toughest scholarships to obtain as applicants require a recommendation to even qualify to apply. About 33% of succesful (i.e. selected) applicants are top HYPSM graduates.

Successful applicants get to attend any UK university or universities, in any city, and study any subject (except MBA, Financial Economics and some Oxford courses) for up to 3 years.

Only 2 years funding is guaranteed; the 3rd year is for those who decide to extend their studies to a PhD and they would need to apply for additional funding, which may be turned down.

Here is a league table of the UK universities these highly elite US students elect to study using their prestigious scholarships from year 2000 to 2019:

Note: I have removed LSHTM from the list because it is a purely postgrad institution and not of interest. Otherwise it would have been No. 6 with 34 Marshall Scholars choosing to study there.

So, again, it is dominated by the Golden Triangle universities. It is surprising Manchester is not that frequently selected.

Warwick has only ever had 3 Marshall Scholars in these 20 years. While Exeter had never had a single one.

In addition, because of their popularity, if a candidate puts one of Oxford, Cambridge, Imperial, KCL, LSE or UCL as their first choice institution, none of these six universities can then also be listed as second choice institution.

This mean all these London 4’s Marshall Scholars attendees figures suffer because those who select Oxbridge as their first choice cannot apply/select to attend them too as second choice. And majority of these elite applicants will definitely apply to attend Oxbridge. So I would argue that the London 4’s popularity amongst these elite students is even more significant than these figures suggest.

No, I don’t think this argument is valid.

I have already taken that into account this, and I am sure it has low bearings on the number of pages created.

Even St Andrews will not be close to Edinburgh in number of pages.

The most plausible way to assess “the number of subjects that UK universities offer” is to review research-intensive universities’ submissions for REF Assessment, which is a government system of assessing universities research capabilities annd determine how much to allocate research funding to each of them for the next 7 years.

Virtually all such UK research-intensive universities do research in their course areas and use these to attract funding, it is just the size and quality of research that differs. So virtually all of them submit for all the subjects they offer courses in.

The REF 2014 had a maximum of “36 units of assessment”, here were submissions numbers (I have arranged them in the order of the last table ranking on post #73):

I guess it is clear there is no pattern observed showing the “number of subjects the universities offer” influences this ranking.

If it did, major city universities will reside more at the top of the rankings.

The real large city universities with good breadth of subjects like Manchester, Birmingham, Leeds, Nottingham and Glasgow did not even make Top 10 in the rankings. While 2 very small specialists, LSE and Imperial, did.

Other major city universities like Sheffield, Newcastle, Belfast, Cardiff, Liverpool, Southampton and co will offer far more number of subjects than some universities on that table, yet they are not even in the table, talk less of being at the top of the table.

Have a look at the Metropolitan map here: 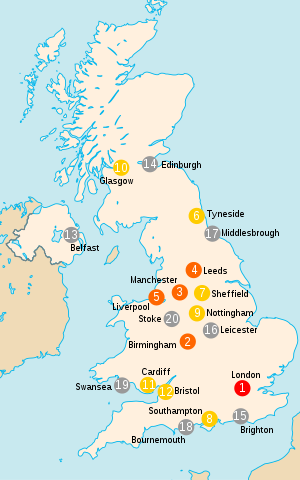 A metropolitan area is generally defined as consisting of an urban area, conurbation or agglomeration, together with the surrounding area to which it is closely economically and socially integrated through commuting. The European Union's ESPON project defined a harmonised series of metropolitan areas across Europe, made up of two components: Morphological Urban Areas (MUAs), which are similar to urban areas that form the densely populated urban cores of metropolitan areas, and Functional Urban...

If breadth of subject was that significant, they should all be comfortably beating Bath, at least.

So the number of pages generated by students does not speak more to the breadth of subjects the universities offer.

Bread of subjects matter, but it is not the main factor from my analysis of the factors. It would carry lower weighting in the list of factors.

I did state “obviously demand plays a role as well.” To be fair though, I probably should not have said that the number of pages speak “more” to breadth when the message I intended to convey is that breadth certainly has an impact and should be taken into account quantitatively.

For example, using your numbers, if LSE had 238 pages on TSR but offered only 14 units, that might suggest to me more demand per unit offered than UCL, which has 251 pages for 36 units. UCL will certainly have pages generated for it with respect to units that LSE does not offer. The fact that UCL has more pages overall certainly does not indicate to me that UCL is a more in-demand school with respect to the units in which UCL and LSE compete. I’m not saying the opposite is true either–the number of pages is not a measuring stick I would use at all–I just don’t buy the conclusion that the data as presented supports the conclusion being offered.

In any event, this is not really supposed to be a debate forum, so I will stop here. I will stop also because what started as a question about KCL versus U.S. universities has somehow devolved into a debate about the relative prestige of UK universities, and I don’t want to hijack OP’s thread any more than has already occurred.

I am sorry, CaliPops, but I am afraid this second premise is wrong too.

I have to say that I should take majority of the blame for your coming up with this wrong premise as you are using the statistics supplied by myself.

The reality is that March is not really the optimal time for me to create the ranking table, but it was just the time period I was trying to make the point to others last year; hence I had to compile it. And I then followed-up and decided to do a LfL for the same time period this year to demonstrate a pattern.

In reality, the non-Oxbridge universities with the lowest acceptance rates (i.e. The London 4, Edinburgh and St Andrews) tend to give out offers much later than some other universities, hence have a buzz of activity on their pages post-March with excited and disappointed applicants chatting.

So the numbers you have used to come to your conclusion were inadequate because they do drastically change at the top after what you have seen (…aka My fault).

For example, last year, the number of pages eventually (i.e. at the end of all chats) were:

This year, LSE is no more at 238 pages and UCL at 251 pages. LSE has gone well past UCL. The current and ongoing number of pages this year is:

LSE has far less units [of subjects] than UCL but yet generates far more pages; and St Andrews is the same relative to Edinburgh. So you can see that having more units is not necessarily a significant or impactful factor in getting a generation of more pages as your premise suggests?

There are other more significant factors that leads to the generation of these pages. No one can really logically argue that it is mere coincidence that the set of universities seen as arguably “the group of most prestigious UK universities” are at the top of the tables (in some decent order), while those seen as not prestigious (like the ex-Polys) cannot even get past 5 pages.

So the number of pages is really a good measuring stick of prestige, which should be used in combination with other numerous measuring sticks. I am not a sole-metric analyst of complex and subjective issues like “Prestige”, as I know that will just lead to a naively wrong answer.

The reality is that the apt time to produce this ranking is around June-July when all offers have been made, and all the pages have almost slowed to a halt.

Really my bad! But, in March last year, I just wanted to use something indicative to make a point when I did the table ranking. The reality is that, after March, only about 6 universities really drastically change positions due to their continued or accelerated activities; so my indicativeness in March was still very valid.

I actually forgot to highlight that it cannot be coincidence that the outcome was similar when I did the same ranking for postgraduate applicants’ chat threads on post #83.

The same [arguably] "group of most prestigious UK universities” were at the top of that table too.

Again, UCL has 3 times the number of postgraduate student population of LSE, but yet LSE has far more postgraduate chat pages.

I am responding only because I do not want my silence to be misconstrued as some kind of acknowledgement of your assertion.

I should have said in my last post that my silence should not be taken as acceptance or an acknowledgment of anything. I’m saying it now. I actually enjoy intellectually honest debate, but I understand this is the not the place for it, and I’m not interested on being opposite a filibuster. Peace.

But the situation is very different for universities where the demand per available seat is higher and the offer percentage is lower.

Universities with higher demand and lower offer rates tend to be the more prestigious universities.

The table from last year and this year does not back the premise “the breadth of units significantly gives more pages”; neither can it explain the table and its mix.