Let’s get ready for college football! 🏈

I just got around to watching this week’s SEC Shorts.

That is one show Auburn did not want to be a “star” of!

What are your favorite “recap” shows, humorous or otherwise?

(edit: forgot to include the link)

I found this ESPN clip to be highly entertaining.

7:30pm EDT ESPN tonight! While some colleges would have about 20,000 people in the stands when their team is bad, true school spirit will be on display tonight. Easily a Top 10 football venue and entrance. Let’s Go! Hokies!

We were at the 11am game against Wofford last Saturday - approx 60,000 in the stands for an 11am game. Against Wofford. The student section was packed! AMAZING school spirit! Virtually the whole town of Blacksburg is shutting down today so that people can tailgate and go to the game. Personally, I think Enter Sandman is a top 3, even at 11am

By golly, the Hokies are even worse than my extremely low expectations. New Coach Pry has a massive multi-year rebuild in front of him.

What is going on with all the College Basketball Schools in Football this season? 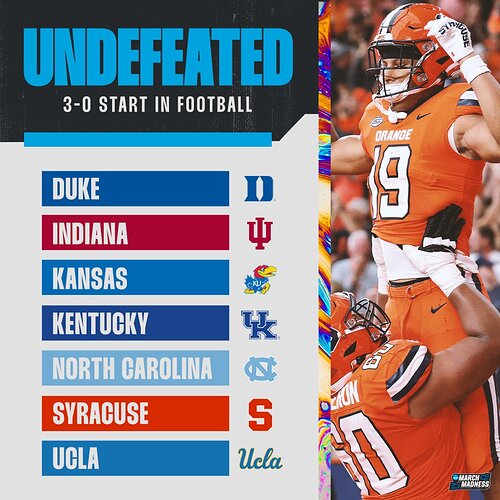 The Badgers are likely going to have a tough day in Columbus tomorrow.

However, if they can avoid turnovers/penalties on offense and put some points on the board (unlike the damn Wash State debacle), the D is probably good enough to keep them in the game. The best offense in the country will surely tell us how good this D is.

There is a chance of rain, so if it becomes a muddy slugfest, that favors the Badgers. Good weather and a fast field favor the Buckeyes.

The first 3 games of season are generally played against patsies. Let’s see where they all end up at the end of the season.

Don’t rain on my parade!

Although in UGA’s case, I wouldn’t call Oregon a patsy. But much remains to be seen and today won’t be it for UGA (hope I’m not jinxing them).

Hope everyone has a fun day of football!

That’s funny. Think there are a few more undefeated teams than these and I imagine a few of these will not be undefeated after today.

UNC (Go Heels) has a great quarterback, though. Just need to step it up on defense. If they could do that they might crack the top 25. Duke, not so much.

I’m mad at myself. I single-handedly jinxed them.

My husband just jinxed Clemson, he’s known to jinx teams by saying things like “no one misses the extra point.”

We’ve got a game in Ann Arbor!

Are you saying that Rutgers 66 -7 win over Wagner wasn’t a tough game?

Lets Go Quakers! Penn is playing Lafayette (my D’s alma mater) so family bragging rights are on the line!

Now I’ve jinxed my other team. I can no longer comment. I’m cursed

I thought it was me; I was the jinx in the 90s, banned from games, gained entrance again in the early 2000’s, received forgiveness in 2016 and have been living a quiet existence since then. This season I’m getting the stink eye again

Well if you watched the Clemson wake game you will understand why he was not allowed to speak at all during the last 2 hours! His comment was in the beginning of the first half!