Our December selection is a duo of Victorian novellas with a supernatural bent: Lois the Witch by Elizabeth Gaskell and A Christmas Carol by Charles Dickens. Let the first lead you into Halloween and the second into Christmas!

Lois the Witch was published in October 1859 in the weekly All the Year Round, edited by Charles Dickens. Set in 1691, it tells the tale of Lois Barclay, who travels from England to Salem, Massachusetts after the death of her parents to live with her uncle and his family. Once there, she becomes a target for suspicious townsfolk during the Salem witch trials. Lois the Witch is included in Gaskell’s collection Curious, if True and is free online in both written and audio formats.

Elizabeth Gaskell showcases the height of gothic fiction’s ability to delight in the otherworldly and to dig deep into what truly haunts us. - Audible.com

The perennial favorite A Christmas Carol by Charles Dickens takes a slightly lighter look at the influence of the supernatural, with the story of Ebenezer Scrooge, an elderly miser visited by the spirits of Christmas Past, Present, and Yet to Come. A Christmas Carol, first published in 1843, has never been out of print and has been adapted for radio, film, television, stage, and opera. It is available for free online.

Every idiot who goes about with ‘Merry Christmas’ on his lips, should be boiled with his own pudding, and buried with a stake of holly through his heart. - Ebenezer Scrooge

Here is the link to Lois the Witch online: 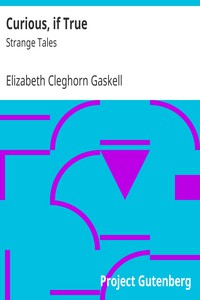 And the audio version:

Here is the link to A Christmas Carol online: