Aaron is growing on me…way better than Dr Oz.
But agree Mike probably is best so far.

Rodgers seemed more comfortable on Friday’s show than he did at the start of the week. He needs to find a way to let some personality show through. Seems wooden.

Aaron Rodgers speaks in a very dry, not very inflective way on all of his interviews. So I thought he was animated later in the week. For him.

Me, I think we should have a showdown of the quarterbacks on jeopardy. Let’s see how Tony Romo v. Payton Manning do? Wishful thinking on my part. Maybe we could do play by play, Jim Nantz v Ian Eagle?

But you can see I think that the voice is very important for a game show host. A big deep voice is best. Or at least, what we’ve been accustomed to.

I agree. Aaron is not an animated guy. He is a big fan of the show, a smart guy (noted by his success himself in Jeopardy) and quite likely was pretty honored if they invited him or accepted his interest in guest hosting. He seems pretty appreciative for the opportunity each show expressing words of thanks.

It’s a game show! I think it’s great that the show is such an institution that big names would take the chance of living in those big Trabek shoes for a stint.

I like him. He is very low key. If he were made host the show would not be about him. But Aaron has a day job.

I agree. The stars of the show should be the contestants and the material/format. Not the host. Other shows need excitement and energy from the host to make them interesting. Jeopardy does not.

Aaron has done a good job. Thought he might struggle more than other guest hosts because he does not live speaking in front of a camera. But he put a lot of time and effort in watching old shows, seeing how Alex went to breaks, came back from breaks, interviewed contestants (which has become an awkward part of the show–even back in the later Alex days), reacted to wrong responses, etc. Treated it like an NFL game and prepared spending a lot of time studying film.

I think each of the guest hosts has done a passable job. Different voices/paces which is something that didn’t change for 36 years with Alex. Least favorite was Dr. Oz (not just for the offstage baggage he brought) but the pace of his games was the least enjoyable to me to watch.

If you want someone who brings little baggage, I think you go with Richards.

I think its a testament to the show that the guests have all been very serviceable hosts (and I think Ken and Richards did very well and Aaron is doing well as did Katie). I think its a well oiled machine. With rehearsals and the production staff (and good contestants and the material/format) the show can do well no mater who hosts. Also made me realize that although I liked Alex a great deal, I like the show more.

Richards is perfect, IMO. I’m just thankful for a segue into whoever is permanent, to get used to being without Alex. I just simply like to look at Aaron. LOL. 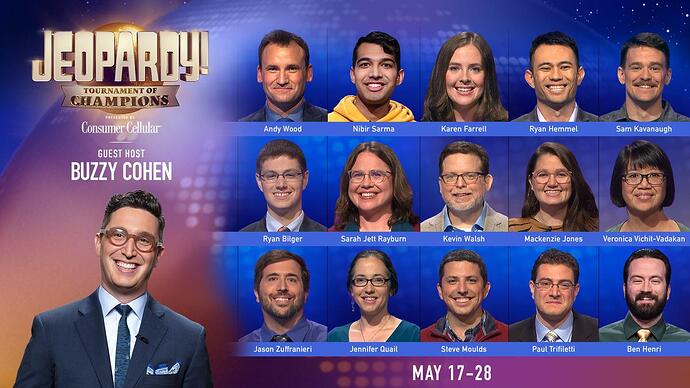 Former Jeopardy! Champion Buzzy Cohen is returning to the show to guest host the upcoming Tournament of Champions, set to air May 17-28. Cohen, who was given the nickname “Mr. Personality” by Alex Trebek, became a fan favorite in 2016, winning...

Aaron actually grew on me over the last couple of weeks! We have watched Jeopardy much more than we ever did during the last weeks with Alex and now the guest hosts. The two so far that I would definitely not want to watch as permanent hosts-Katie and Dr. Oz. I’m looking forward to Anderson Cooper.

I’m not. So you see him as a contestant?