I thought Buzzy did a good job when he hosted.

I know a few folks here don’t care for Mayim, but I like her. I like Ken as well.

Buzzy will be joining The Chase as Ken Jennings is leaving that show.

Buzzy was the Chaser on the show that aired May 31st. Chased them down in the final chase and won. There has been speculation that Ken left The Chase to allow him to host Jeopardy full time. Not sure how likely it is that Buzzy would pick up The Chase if he is going to host Jeopardy full time next season. He may be the host for the Tournament of Champions which I expect will start taping soon. Final episode of the regular season airs July 29th. ToC is set to air in November.

Seems like any time anyone says anything about Jeopardy which could be read in some way to tip the hand of who the next host will be, someone in the media jumps on it. Ken leaves The Chase? Doing that to be full time Jeopardy host. Mayim starts hosting shows that are airing, Ken is not going to be the host (its why he isn’t hosting currently airing shows even though that is what they said they would do – rotate between Ken and Mayim hosting). Buzzy makes a cryptic post about Jeopardy? Must mean he will be the new host. I think its a combo of wishful thinking and not being able to wait for an announcement.

I like Mayim and I think she has gotten better as the host. But one thing I still find frustrating is she waits too long many times to rule a response correct/wrong. That awkward pause throws off the natural timing of the game. LeVar Burton had a very big problem with that which made the shows he hosted less enjoyable to watch. The show has a certain pace to it that is important. Sometimes contestants disrupt that pace too but to me that is part of the strategy of the game (some do it naturally, being more deliberate in terms of style of play, and others do so purposefully to control the game). The host should not make that happen.

Mayim has announced that she tested positive for Covid. 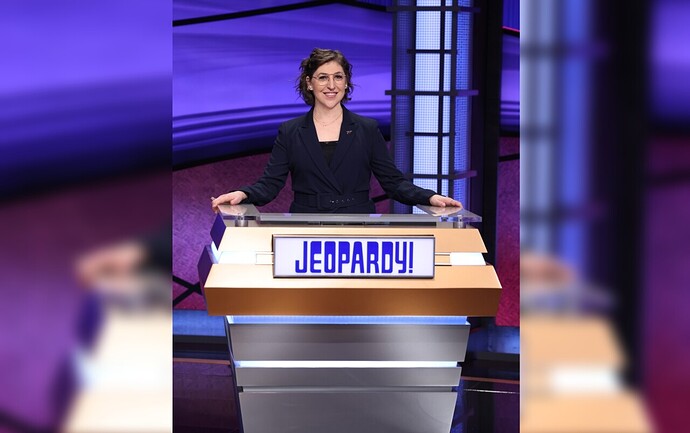 The “Jeopardy!” host went live on Instagram today, describing her symptoms and the various methods she’s been trying to treat herself such as, taking zinc, vitamin C and even drin…

Is it luck or skill??

Megan’s Final Jeopardy bets have worked out for her. Three $2 wins in 6 games. Jenny would have won had she bet nothing. But then should would have not covered Megan had both gotten FJ right and Megan made a max bet.

Tonight, Mayim was pausing between ruling a contestant right/wrong and stating that said contestant had taken back the lead. Disrupted the flow of the game with the contestants looking for select the next clue.

At one point, with one of the categories “M.R.”, Aye, Rob pulled a Sean Connery in SNL skit (picking category that was “S” words by saying Swords) and said Mr., Aye. LOLx

I think its a matter of skill putting her in the best chance to win when the cards fall a certain way. Tonight, she made the FJ bet that would have her win if Rob bet to cover Jenny (which he did) but missed Final Jeopardy (which he did) and Megan got FJ right (which she did). Had Rob gotten FJ right, Megan loses. Had Jenny bet $0 or gotten FJ correct, Jenny wins. Its easy to look back at who got FJ right/wrong and say what any given contestant should have bet to win. But you have an expectation of what each contestants will do based on how much money they have going into FJ relative to the other contestants and bet in a way that maximizes your chance of winning if certain things happen. If either Jenny or Rob get FJ right, Megan loses. So you can play for the situation in which Jenny and Rob both miss which is what Megan did.

Contestants are typically in the audience watching some games before their turn is up. They can see if a contestant is betting to cover in FJ. If not (and some don’t – Ryan several times with a lead did not make a cover bet), you can let that influence how you bet. But absent anything else, most successful contestants do make cover bets so you use that as a guide.

Today Megan bet like I would have had her bet in the last few games - enough to just get by if the other two got it wrong.

Surprise to me, I got it right and it wasn’t a category I would have thought I’d have a chance at.

Not the best game. A lot of missed questions and triple stumpers. And each Daily Double was missed. Contestants had more money 2 categories into Double Jeopardy than they did at the end of the round.

Interesting Final Jeopardy bets. Jeff and Sarah were tied for the lead with $7,000. Would expect each to bet everything to assure if they get FJ right, they are assured of at least a tie breaker. Sarah did bet everything. But got FJ wrong. Jeff only bet enough to cover Megan (not Sarah) but he got FJ right. Megan also got FJ right but it didn’t matter. She bet enough (assuming she got FJ right) to beat Sarah and Jeff if they both decided to risk nothing.

There was a lot of wild guessing in the last few episodes.

And some things that seemed easy and I was very surprised that not one of the 3 got it. Eustachian tube I think for instance, but can’t remember which episode? I think it was on Megan’s run.

Luxembourg. Geography has long been a weak point for contestants. Geography even ended Amy’s run.

I got Final Jeopardy last night immediately. Talking bird in literature in the 1800s? Not many cases of that, ha.

And I got it wrong even though I had just been looking up Baltimore and touring the Poe museums!

I was screaming at the TV during FJ last night. I can’t believe nobody got that. One of my favorite classic albums.

My husband got FJ right last night but not because he knew the album name. He just went by the admiral quote. And we both really like Tom Petty but didn’t remember the particular album name.
I did get the Poe FJ right .

Between the two of us , we’ve been doing fairly well with the Final Jeopardy questions lately. I got the right answer tonight. Are the questions getting easier or are we just getting smarter in our old age?