DD is considering applying to UK schools, including either of Oxford or Cambridge. She is in the IB diploma program at her school (which has sent students to UK colleges on many occasions). She is high school class of 2023. We are US-based. She’s planning on speaking to her guidance counselors, but I wanted her to have some bottom-line guidance (and also for her dad too, who is clueless about this).

My question is do you know of any resources that walk a student/parent from the US as to what exactly the process is for an IB student (and I guess one who is specifically from the US) to apply to Oxbridge and others? For example, I’m a bit confused as to how the AP requirement works in relation to the IB Dip. In addition, if there is an indicative timetable, that would REALLY help us for planning purposes.

Pandemic permitting, given her current summer plans, her ability to travel to see schools and to take any required tests might be limited. In light of the geopolitical situation, I want to plan ahead if she needs to go to the UK to do tests, for example.

Thanks in advance for your help.

I’m very sure she won’t need to go to the UK to take any tests. Oxbridge states on their websites what AP scores they expect. As IB is standardized, I am pretty sure her results will be valid there, but her teachers will have to give predicted scores, of course.

Thank you so much, @Lindagaf!

I guess another question that I have for CCers is whether the AP requirement applies for an IB Dip candidate?

Agree with @Lindagaf: all of the admissions tests for Oxford & Cambridge are available in the US- though depending on where you live you may still have to travel.

Both unis accept IB- Oxford standard offer is around 39 (incl a 776), and Cambridge is 40-42 (776 or 777, depending on the course). Ironically they 'like" IB more than AP, but students feel that it is harder to meet the IB requirements than the AP requirements!

eta: it’s A-levels OR IB OR AP to meet the entry requirements. You will find the specifics for each individual course (including subject-specific requirements) on the course pages.

Thank you, @collegemom3717. So does that mean an IB Dip candidate does NOT have to fulfill the AP requirements?

Yes. Here is an example from the Oxford website: 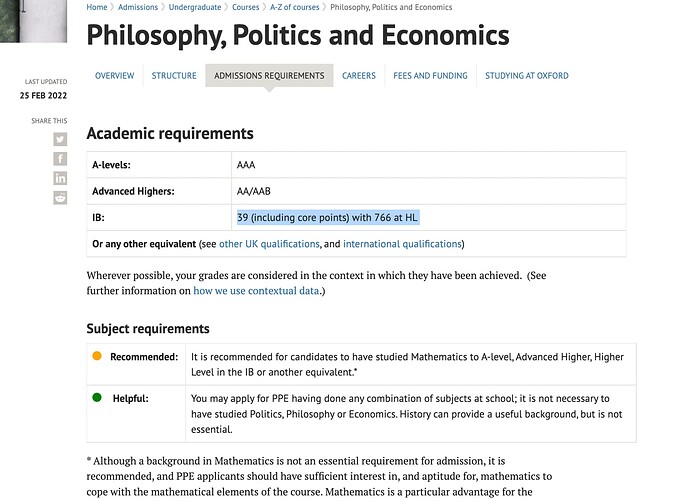 Excellent and much appreciated. Indeed, PP&E is one that she is strongly considering.

The advantage of AP is that you can get an unconditional offer if you’ve taken enough in/before junior year, whereas for IB you’d expect a conditional offer where you wouldn’t be sure of the outcome until July. That usually means accepting a US backup and paying a deposit that you’ll lose.

With regard to admissions, Oxford is more friendly to Americans than Cambridge (requires fewer APs and has a standard test before interview that you can take in the US, usually at your school if they are willing to proctor it). Cambridge math is particularly awkward (and not advisable) since their STEP exam results don’t come out until August.

Interviews have been online in the pandemic. They take place in early to mid December and you find out if you are invited around Thanksgiving (applications are due Oct 15 and Oxford tests are early November). Next year they will likely have a choice of in person or online. However, I’d strongly recommend making the effort to go in person for the interview, not least because you meet fellow students and get a sense of what it’s like living there, since you stay for 2-3 days. Also, because Americans often turn down offers (which Oxbridge hate: their domestic yield is 95-98%), going for interview is a sign of commitment which could help you get an offer.

PPE is extremely competitive. S18 got an interview but not an offer: he had 4.0UW, 1540 SAT (single sitting, which is strongly advised since you list all scores), 10 APs with 8 5s (6 APs after junior year). You will need a 5 in Calc BC or HL math in IB. And to practice for the TSA (November pre-test).

His biggest mistake was not enough background reading. I’d advise reading as much as possible of the first year advance reading list before interview, see for example: Philosophy, Politics and Economics Reading List | Balliol College, University of Oxford

All excellent info, @Twoin18. You and the other posters here have already flagged some important issues.

I do know DD has been reading up on the PP&E lists, but the other info that you et al have given is amazing.

Ten minutes ago, I was clueless, but thanks to CCers, I actually understand where to go now!

Here is info on PPE admissions:

In addition to the Balliol reading list she should be reading The Economist nearly cover to cover on a regular basis.

re: TSA- it is a huge filter for interviews, so she should spend some time over the summer learning more about it. You can find info on test sites here:

or her school can apply to be a test center (in which case, the time to start that conversation with her school is now)

The only thing my son traveled to the UK for were his interviews at Oxford. They gave him the option for remote, but he wanted to be there. The past two years have been remote interviews for everyone. Hopefully things go back to normal this year.

He had all of the ACT/AP requirements met by the time he filed his UCAS on October 15th.

Hiya, she definitely does not need to travel to the UK for any tests or interviews, except she wants to. These are normally done in the home countries of the applicant.

Firstly, it appears you do realise you can only apply for one of either Oxford or Cambridge, not to both. Then you are allowed to pick a maximum of 4 other universities.

Thirdly, note Scottish universities tend to be 4-year courses for a bachelors, while the other nations’ are 3-years.

As for entry qualifications, her IB is a sufficient qualification with the right grades or predicted grades (plus her personal statement is strong and she passes the tests & the interview).

Other alternative qualifications as a US student that she could use to apply are APs and International A-Levels (if these are available in the US). It is one of the three; you do not have to do two or more to qualify or inprove your chances.

If she has the right ‘predicted grades’ in any of these qualifications, then the offer she would receive would most likely be conditional if she is successful; if she already has ‘actual grades’ that meets the requirements and she is successful, then it would be unconditional.

Oxford and Cambridge tend to give out all their offers by the end of the next January, while other UK universities might not have completed all theirs by anytime between March and June. Some departments are quicker in offering than others in the same university.

These are normally done in the home countries of the applicant.

Pre-COVID, Cambridge required in-person interviews while Oxford had the option of video interviews. But it was rare unless you really couldn’t travel. When S18 interviewed at Oxford, there was a candidate who’d flown all the way from New Zealand, and others from the US, Canada, Spain etc. Only one did an online interview, I believe from a country in the Middle East where travel was particularly difficult.

@LutherVan (and all): thanks so much for all this insight. It is deeply appreciated.

If she applies to either of Oxford or Cambridge (and they are on her radar), does this mean she has to (a) submit the application for ALL schools prior to the mid-October deadline and (b) that she has to complete the required entrance tests and interview prior to mid-October?

There is only one test date for required entrance tests- for this year it is 4 November 2022. You must register for it by 15 October (that’s why I mentioned in my earlier post that you should be sorting out where she would take it now). Oxbridge applications must be in 15 October. You can add more unis (up to the 5 max) later, but remember that you use the same essay and LoR for all of them (and pay the one fee), so there is nothing extra to do.

Excellent! Again, thanks to all for this. I was able to find a testing center nearby, so that’s incredibly helpful too.

Currently at Oxford. Others’ advice re APs and timeline are correct: IB negates APs (and should make her quite competitive relative to most Americans) and you can apply to other unis after the Oxbridge 15th October deadline. That said, there’s supposedly something of an advantage to applying early for all the top unis.

Do also note that some other unis do interview or have tests, depending on subject - Imperial is the main one, although maths and some other STEM subjects have tests at other top unis like Warwick. If PPE that’s less likely to be a problem.

Would also apply to other unis aside from Oxbridge. While the AP scores are only a minimum to be considered, a 40-42 or better will be an easy admit (assuming no red flags in references or personal statements) for all but the most competitive subjects at UCL, which is a solid university (probably equivalent to a US T20, although ranks better on global league tables). Same goes for Warwick, Durham, Edinburgh, etc. LSE and Imperial are a bit more selective, with LSE being quite random for some of its more competitive subjects (Oxbridge admits and LSE rejects are not uncommon for econ, for example), while Imperial interviews/tests (for most subjects) as per above.

In terms of general tips: personal statement matters far less than most US equivalents (Imperial and Durham are slight exceptions); non-related extracurriculars don’t matter (though you may get small sports/music scholarships); depth of reading around the chosen subject is very important; no-one really cares about career ambitions outside academia; and for Oxbridge/Imperial, the admission hinges on performance at interview rather than what you actually submit prior to that.