If you join the Northeastern University Parents Facebook group there are a few parents of current Global Quest students in Greece and London that you can connect with. Use the search feature.

My daughter was also invited. Do you know if this is something offered to all first years?

It would only be offered to first years in certain majors that are offered at the locations they are using for global quest. It is fairly common, but especially with the overenrollment of this current year, I am sure they are offering it to anyone who might consider it in order to alleviate the overcrowding. My younger D (fall 2016 admit) was offered it even then. Once NUIN started getting popular and successful, they began offering the global quest program (it was callled NUin spring at its start) to other frosh.

It’s like NUin but for fall admits who then go abroad spring semester of first year. They build a cohort in fall, and then go abroad. Global Quest - Northeastern University Global Experience Office

Have numbers been released yet for totals admitted for this year? My daughter is 99% committed but I still worry that the over enrollment could happen again.

There are claims here on CC and elsewhere that the overall acceptance rate is 7%. Looking at the decisions above in this thread there are a lot of waitlisted students. Northeastern has taken a very conservative approach to admissions this year.

7% and they reduced the size of the incoming class so there will not be overenrollment. 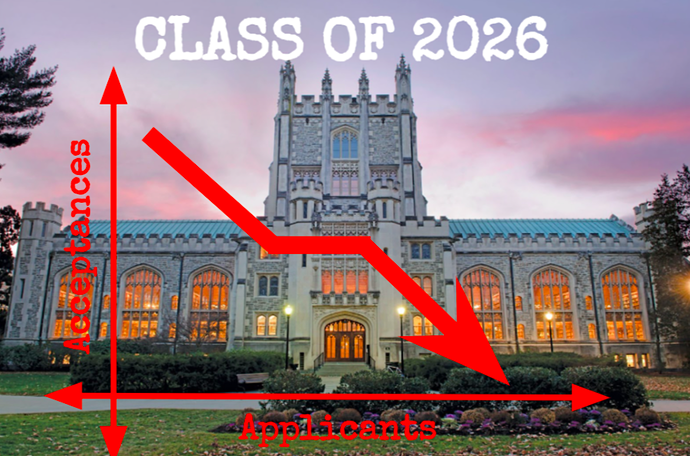 For the class of 2026, college acceptance among the top 100 colleges is at an all-time low according to U.S. News. Last year, Northeastern University’s acceptance rate was 18%. This year it’s 7%. Northeastern was not the only school with lower...

I do not know what is happening to Northeastern this year. Many of my D’s classmate got admitted to T20, Williams, Northwestern etc got rejected by Northeastern. My D got wait-listed at Northeastern, accepted by BU (we declined), and committed to McGill.

They had overenrollment last year and needed to reduce their class size this year. Over 91,000 applicants this year with a 7% acceptance rate so the vast majority of applicants were not accepted, including students who were accepted by very prestigious colleges. Northwestern also had a 7% acceptance rate but with 40,000 fewer applicants. Williams had 15,321 applicants and an 8.5% acceptance rate. I think some people still view Northeastern as a safety school and it really isn’t. I’m not saying that you do, just that I think it’s common.

@Mom270 said it correctly. One question to ask your daughter’s classmates who were accepted at Top 20 schools but denied at Northeastern: if they had been accepted to Northeastern would they have attended? Northeastern (and BU and others) are not looking for students who consider it to be their safety.

Congratulations on McGill. My older son went there a generation ago and had a great time.

Honestly, Northeastern is their safety school, they will decline and go to T20.

And that is why Northeastern rejected them!

if they had been accepted to Northeastern would they have attended?

Very good point that has been mentioned several times, and one that I hope future applicants are aware of.

I know a lot of folks get upset when they hear “Northeastern yield protects” but it’s not necessarily a negative thing. All it means is, they will preferentially admit those who are most likely to enroll vs those using it as a safety.

If someone is not ok with a yield protecting school, they shouldn’t apply. Or alternatively if they do apply and NEU sees through their strategy, then they shouldn’t be surprised.

As someone whose kid wanted NEU as her first, second, and third choice school, we are extremely grateful she was accepted with such challenging odds. I wonder if the yield will be even higher this year because of the sense of scarcity.

My D22 waitlisted at Northeastern, Tufts , UNC CH , CWR. She is committed to McGill - faculty if science

. Congratulations to your daughter!

Who did she send the email to? Her regional admission counsellor?

Anyone hear from NE who was on the wl?

Yes she did. You can find the name of your Admissions officer on their website by region and I believe also in your portal.