Anyone have personal experience with the Ohio State marching band and how fun/rigorous it is? Do freshman get to perform in the halftime shows typically? (in non pandemic times!) How time consuming is it? Thanks for any insight into what the experience would be like.

tbdbitl is the best college band in the country so yeah its very hard to get in and its very rigorous. Athletic band is much less stressful

Thanks for answering. The marching band is the interest though, not athletic bands. So trying to figure out what the commitment would be and if it’s realistic to do it.

The commitment is a significant time commitment equivalent to that of a part-time job. According to a page I found, they rehearse for 2+ hours a day M-F, plus all of the pre-game prep they do on game days. I would take a look at this page which includes information about the tryout process. If the student is very serious in a pursuit to be part of TDBITL, I would suggest keeping an eye on the website for information about Summer Session.

My husband was in the band for 4 years. You didn’t get much response, and I am here for our son’s admission into OSU, so I’ll weigh in to help.

It is physically challenging and the time commitment at that time was a few hours a day from end of summer? through all of fall and then again to prepare for any bowl game trips that come. Expense to members (at that time) wasn’t much. Trips were paid for. All music must be memorized with often a week’s notice.
The band got into a lot of trouble when after years of sexual harrassment they were finally called out on it and lost their director who didn’t enhance that but also didn’t do enough to stop it.
The marching technique is chair step, mostly 8 to 5, at a rigorous tempo (see ramp entrance videos) It is
Not a bad idea to begin practicing and work on that ability to quickly memorize music.
Being in OSUMB is more physically demanding than high school band.

Many non music majors in the band…but the band does detract from the quality of the School of Music in a many ways. My husband enjoyed it at the time, but kept his head on straight about it’s minimal value. that is important.

Thanks for the info! Personally I think it’s too much of a commitment - I think there is a sadness from missing out on senior year marching band and our high school has an amazing program.

Yesterday the student paper had an article about Marching Band. 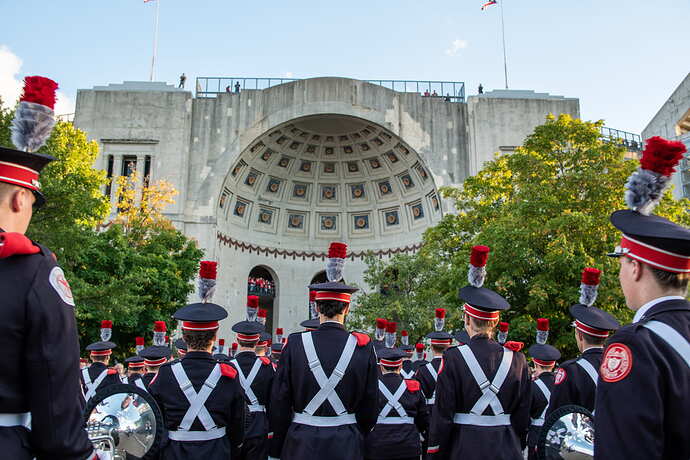 Although Ohio State is known for having “The Best Damn Band in the Land,” many are unaware of how much hard work and heartache is required. Every year, 350-400 student musicians audition for the band, but only 228 make the cut.