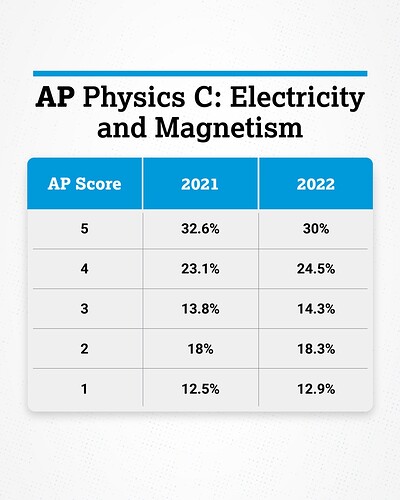 I meant significantly fewer kids for 5s than last year. But seems mechanics went the other way so I guess it may even out.

Are the AP scores for this year are out?

They just released the breakdown of scores for some APs, but won’t be releasing individual student’s scores until July 5.

If you are on twitter, Trevor Packer (AP_Trevor) posts these. If not and you tell me which you want to see, I can copy and paste them here.

Thanks. I see them.

None of my kids 3 exam trends are out: AP English Langauage, Psychology and US History.

Have to wait for July 5th, even SAT results (June) are not out.

Are AP Latin or AP Biology breakdowns out?

No, it’s just physics (all) and Spanish Lit. In general they are all similar to last year. No big changes, mostly just 1-2+% for different score levels. The national %s don’t seem to ever reflect our school’s spread, so I don’t usually pay much attention. It is neat to read about the one kid here and there with a perfect score! Pretty impressive.

No, I haven’t played around on the Niche website. Our school uses Naviance which has 15+ years of historical data.

No. But the person in charge of them at the College Board is gradually releasing score distributions and some other fun facts about tests in a slow trickle. The individual scores aren’t released until July 5-6.

About 27k students take the physics C electronics exam each year. So assuming that that’s the population size (which is incorrect but close enough for present purposes), calculating effect size measures from those percentages yields extremely small and probably meaningless differences between the years.

We tend to obsess over a percentage point or two in thin gs like this, but statistically the variation is often just random cycle-to-cycle noise.

That’s true. I think the changes are mostly note worthy if there is a big change which sometimes happen when the subject has been revamped for whatever reason. Otherwise it’s not usually a big deal.

My kid took the AP Physics (1), Computer Science (1) and Calculus (AB). Just saw the report on Physics 1 - he reported that 1 student out of ~120,000 worldwide earned all 80 out of 80 points possible!! Not my kid I know (he said he struggled to finish one of the FRQs). Waiting for him to wake up to read it. Wondering what he thinks (heck - he probably won’t even remember anything about it lol).

Niche is two years behind on data for my S21s college. Admission rate has gone down drastically in that time due to test optional and their huge increase in apps. Also they take like 60% ED, so if you are applying RD it’s become really tough to get in.

Honestly, considering that my D23 is interested in music tech and (secondarily) music business, this might not be a bad strategy!

(And yes, it’s The Onion, not a serious news article.)