@Gumbymom and @ucbalumnus are always very gracious in sharing their wonderful knowledge about the California public universities, where admissions seem much more complicated than in any other state in the union.

The info on rates of acceptance by GPA at the various campuses, along with the admittance rates into CS programs in particular, is something that is very regularly referred to since the UCs and CS are such popular options that students consider. Pinning the info might lessen the burden on our two Cali public experts. I don’t know if it would be best to pin the info in College Search & Selection, or California state forum, or College Admissions, or somewhere else, but I at least wanted to suggest the idea someplace where we might actually be able to get it done.

There is a pinned thread in the UC general section:

However, it seems that most student posters do not go to that section (or even know that it is there).

Thanks so much for pointing that out! Considering how often I post here, it’s a shame that I didn’t know it was there. If the CS admissions info could be added to one of the first posts, then I think that might eliminate a lot of questions, too. Now for me to start linking to that post whenever these issues arise!

Now for me to start linking to that post whenever these issues arise!

However, be sure to note that the weighted capped HS GPA is what is used. Using the more heavily weighted HS GPA from most high schools will give an overly optimistic chance estimate.

The weighted-capped HS GPA can be calculated as described at GPA Calculator for the University of California – RogerHub .

Of course, it should also be noted that different divisions or majors have different levels of selectivity, with engineering majors and computer science typically being more selective.

The CS major is a slightly different issue, since many people are also considering CS at other universities outside CA (such as UW Seattle). Frequently people are looking at overall admit rate for the university, and grossly underestimate admit rate for direct admission to CS majors. It would be nice to have a pinned post somewhere with CS admit rates for popular universities. Maybe there is one already

But note that most universities that do direct admission to majors are less transparent about admission stats by major than they are for the school overall.

Interestingly, UC is more transparent about that for transfer admission than for frosh admission: 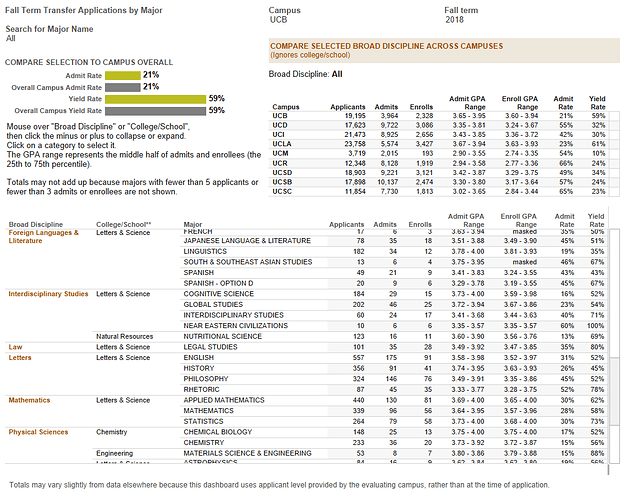 GPA ranges and counts for transfer applicants by major and CIP

I have started a new UC CS thread with the admit rates I have been able to find. I will update the information as it becomes available and have pinned in the UC General Discussion Thread.