Son is a rising senior at a large TX public school with a strong academic reputation. He is not in a priority group. He has good grades but is not in the top 10% which is our concern.

He is interested in film studies, creative writing and economics.

He has received awards for his recent documentary film, is the incoming president of his theater club, eagle scout, Citizenship award from his school, and has written and been a lead in several theater productions. He participates in several theater groups and sports clubs.

Essays and recs should be strong.
Budget is not an issue.

His preference is small to midsize college with film and economics programs that can both be explored (ie you don’t have to pick one or the other). No geographic preference.

I am concerned that schools will not admit him due to being outside the top 10%. His priority schools are Claremont McKenna, Wesleyan, Penn, Georgetown and Middlebury. He will likely pick one of these for ED/EA but all of these are a Far Reach and we are looking for some options that are more likely. Any ideas schools that are more forgiving on class rank with strong SATs and good GPA that offer the ability to pursue both film studies and economics?

If you are full pay, add NYU to the list, still a reach but not as reachy as some of the others on your list.

For a likely - add DePaul U in Chicago. Super part of the city, great film program and they also have econ.

American University may be worth looking into. USC would be somewhere to consider since he’ll likely be NMF. Chapman could be a good safety/match.

Chapman’s film production major (in Dodge) has under a 10% acceptance rate, so a reach for all. Other majors have higher rates of acceptance, likely making those majors a target/match for OP’s S.

That SAT score is pretty impressive. Did he have the scores on PSAT to potentially be a National Merit Scholar? NMS seems to open a lot of doors and get attention even if not top 10 percent.

Have him look into Colorado College! It checks all of the boxes you have mentioned. CC cares most about class rigor, extra curricular involvement, strong writing skills… his GPA is not so low it would take him off the table since he has selected challenging classes. His high SAT score is helpful. Successful CC applicants write strong essays/supplements.

Admissions wants to know that a student “gets” the block plan, and that the student would be actively involved on campus. Of course ED1 gives the biggest bump admissions wise but so does EA (to a lesser degree) since they take most of their class in the ED1, EA, and ED2 rounds. Regular admissions has a much lower admission rate. If he is interested, encourage him to sign up for the virtual open house they are hosting this Friday afternoon… it should be a great way to meet Colorado College!

As a full pay student with outstanding EC accomplishments, superb SAT scores, and a strong GPA, your son should do very well with respect to college admissions.

If your son fits in with the culture at Claremont McKenna College, then apply ED.

P.S. I understand why your son is considering Wesleyan (film studies), but it has a much different campus culture than those at CMC, Penn, & Georgetown.

I guess this is a question for the OP, would he apply as an economics or a film studies major? Chapman’s overall acceptance rate is 56% with 1370 as 75% SAT. It’s hard to imagine they’d turn down a 1550/3.85 kid as an Econ major, but obviously it’s possible.

I understand your concern. S22 is in the same boat, maybe slightly higher stats, also not top 10% due to competitive nature of his high school. I haven’t come across a definitive answer to whether that standing is an issue in the context of his high school. Since reaches will be reaches, and your son has solid stats, he may as well shoot for a reach as long as he has plenty of matches and safeties.

He is taking a summer film class at USC and loves it. The film school is a reach however.

He will likely be an NMS based on our states historical cut off. Not sure if that helps with admission but will look into it.

Agree Denison is a good one to explore, with both a Cinema department (including production) and a narrative non-fiction concentration in English department, plus Econ with a concentration available in financial economics. Lots of students double major or major and minor. Easy to get to, about 25 minutes from Columbus airport.

(edited to add back in the missing word “concentration”)

P.S. I understand why your son is considering Wesleyan (film studies), but it has a much different campus culture than those at CMC, Penn, & Georgetown.

Of course it has. Unlike those other institutions, it doesn’t have a lot of business and accounting majors. Spiritually, it’s closer to Pomona than CMC is.

If he is interested in film, Loyola Marymount would be a school to look at. They have a well regarded school of film and television. They offer an economics major as well; although I can’t speak to its quality. Emerson in Boston has an excellent program in film and creative writing, but they don’t offer economics. Both schools would be low targets for your son with his excellent gpa and outstanding SAT score.

The 10 Best Colleges for Creative Writers | The Freelancer, by Contently

The 25 Most Literary Colleges in America

School’s almost back in session, and that means thousands of students — undergraduates and graduate students — will head to their respective universities to become better writers, or to study the art of writing. We got to thinking of all the schools…

How about Vassar or Oberlin?

Regarding Wesleyan, note that in its most recent entering class one third of the students originated from outside of the top 10% of their HS classes (to the extent that information is available for this statistic). 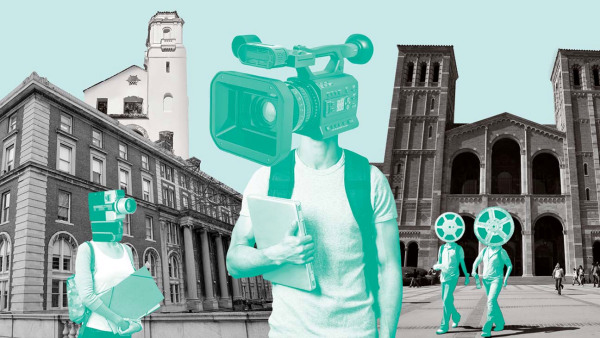 A career behind the camera begins at these elite institutions — from USC to NYU — even as COVID-19 complicates curricula.

Vassar might be a good choice and males do get an admission boost.

This topic was automatically closed 90 days after the last reply. New replies are no longer allowed.