D22 is extremely interested in Wes. Based on research, she has two preliminary questions for those in the know.

She has come across statements on the web and the Argus school newspaper that suggest social studies and perhaps humanities classes are extremely popular, and as such can be overcrowded if not limited in size, or limited in size, this taking away from the small LAC experience in those disciplines.

Not sure where those statements are coming from. D22 may be referring to a recent post wherein I replied that among Wesleyan’s “Cons” was the fact that popular teachers tended to have higher than average class enrollments. And, I pointed to President Roth’s class on Modernity as an example. TBH, almost anywhere else that would be considered a “Pro”. Every college has its share of classes that have to be taught lecture style because word-of-mouth has made it a “hot” course. The professor teaching the course is very often popular because he or she is a brilliant lecturer.

All of which is to say, that, in general, people are not flocking to COL and to CSS in order to escape large classes. These founding members of the late President Victor Butterfield’s “College Plan” of 1959 were bright shiny objects for many, many years. They blended different university departments into a carefully curated menu of Great Writers and Thinkers. But, their biggest draw was the amount of time allotted to working independently of traditional class structures; you basically had two or three teachers whom you might see once a week; the rest of the time you spent devouring a mountain of required reading and preparing a five or six page paper. When i described them as “honors colleges” I was grasping for an analogy that might explain their place in the academic organization of Wesleyan or make it a little clearer. I’m afraid I may have failed in that regard. They are not in competition with the rest of Wesleyan; they appeal to a particular type of student. Believe it or not, not everyone at Wesleyan thinks the workload and commitment to weekly papers is all that.

I’ll leave your second question for a current student to answer. I was not an art or theater person when I was an undergraduate although, ironically, I think I would be if I were attending today. That’s because I have a lot more exposure to adults in the profession, something I didn’t have as a nineteen year-old from a working-class background.

@circuitrider Thanks much. I will ask her to research a bit further into the class catalog. It does seem quite transparent online. She says there was a comment in the Argus re over subscription in one of the articles about the abandonment of selectivity for COL.

We are planning to visit late summer/early Fall as she might be considering one of the early options. One of us will PM you as we get closer. I appreciate your candor on current campus EC dynamics. You have always been very well informed.

D22 loves the performing arts as a hobby and life interest and potential secondary interdisciplinary academic area but is not looking to be in a competitive environment in that area or pursue a career in the theatre or media business; she sees it as an area of distraction and social interaction primarily. She is wondering whether Wesleyan’s performing arts groups and activities will be disproportionately populated with those aspiring to be the future Lin Manuel Mirandas and this would create a competitive/tense environment in the performance-related groups or community.

Well, since no one else has chimed in, I’ll give you my take on the performing arts scene at Wesleyan: It is pretty competitive; in a typical year, about 10% of Wesleyan graduates find entry-level jobs in the leisure/arts&entertainment industry (that’s nearly as many as go into finance.) But, that doesn’t mean there aren’t entry points for the merely curious. Take a look at Introduction to Dance (DANC 111), and the First Year Seminar, Introduction to Contemporary Dance From a Global Perspective -DANC 104F, especially, the latter (very few undergraduates arrive on campus with a lot of Javanese dance under their belts.)

OP I know from previous threads and PM discussions your D22 is also considering Brown. The two schools have a great deal in common and overlap in applicant pool.

It actually appears to be a running joke at Wesleyan as President Roth a few years ago joked to accepted students about having been rejected by Brown (apparently not well received by some). Seems however born out by Argus article… 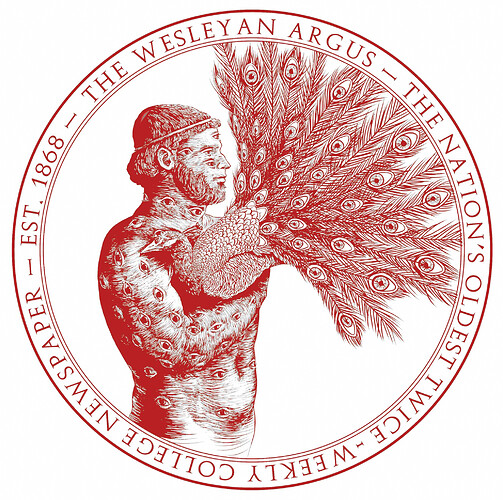 And this tongue in cheek piece in the Wesleyan Groundhog…

PROVIDENCE, RI – Shocking news spread from Providence, Rhode Island out to the far reaches of central Connecticut today. A technician at the Brown University admissions office discovered that a com…

Having spent time at both schools I can tell you they have many similarities ranging from the type of students they attract, curriculum flexibility, politically active communities and a generally non judgmental and collaborative vibe. Can’t go wrong with either school.

If I may offer an observation that applies to all schools:

Professors who attract large numbers of students to their lectures are not necessarily brilliant, but they are entertaining.

Wesleyan overlap schools that may be of interest: Brown, Yale, & Vassar.

I read this and instantly saw the faces of three professors of mine from my undergraduate, to each of whom your point clearly applies. My comp. lit professor was always over-subscribed because he was so theatrical and gave out high grades. Looking back, I’m not so sure how good he was.

The Groundhog is hilarious. Hope they haven’t all graduated.