My D24 is interested in Oregon State. Living in Tennessee, we don’t hear much about the school, and we don’t see much about it on here either. Can anyone with experience/knowledge tell me a bit about it, particularly the engineering school (environmental and ecological engineering) and the Honors College? What questions should I be asking about Oregon State, as our experience is primarily with southeastern schools.

For background, my D24 is gay, a master SCUBA diver, rock climber, and full-IB student. She does not want to remain in our home state and wants an outdoorsy university.

All I know about Corvallis is from S.M. Stirling novels.

I’m sorry I don’t have firsthand knowledge but D22’s BFF will be attending this fall and is pretty excited about it. She chose it over Cal Poly, UC Santa Cruz, SDSU among others. It’s a popular choice for liberal Bay Area kids because of the WUE discount, which unfortunately would not apply to a kid from Tennessee. But from your short description of your daughter, it sounds like a good fit otherwise. No knowledge of either engineering or honors, unfortunately!

We really enjoyed our tour, and my son was ready to sign up at the end of the day. He liked the students and professors that we met, the friendly and collaborative vibe, first year hands-on engineering design courses, lovely campus, honors college. He was impressed by the lab facilities that he visited and the research forest. It’s technically his safety school, but in the end, I can see him choosing it over others on his list.

Also, if your D wants to see the sort of work students do for an Honors thesis at Oregon State, there is an archive online. My son was able to find a lot of examples of students’ work related to his interests. Honors College Theses (HCT) // ScholarsArchive@OSU

My son attends Oregon State (OSU). He’s a sophomore in Mechanical Engineering with a minor in computer science. I believe your daughter would fit in well with the school population.

OSU has its own research ship based at the Hatfield Marine Science center and partnerships with federal agencies, so they are doing serious environmental research. A student taking classes in marine science might need a car to drive to Newport for the Marine Science Center. You’d have to ask, maybe they have some housing/classrooms out there. I’m speculating they have a scuba club. It’s about a 45-minute drive to the beach on a modestly curvy, but wide/safe road.

The rec center has a massive rock-climbing facility.

The largest concentration of students comes from Oregon, and folks from Portland are very left politically.

I’ve only read about the Honors college on the Parent page on Facebook. On paper, I think the honors college looks great. There are mixed reviews on the value. They have dorms dedicated to honors college students, but the OSU housing office does not give any guarantees, so parents have reported having to complain and beg for their freshman’s placement in those dorms. They wait till the month before school starts to give students their room assignments. I’m speculating that parents who post complaints are the ones asking for help and advice. But I would ask directly. The dorm situation there is not ideal, but most students live off campus in Sophomore year. Almost all the dorms are old. They expand capacity with adding furniture and making doubles into triples. There are a lot of apartment complexes surrounding the campus. Our son was placed in an economy triple freshman year, and that was grim. He survived, had nice roommates, and for sophomore year was given priority for a better dorm.

Academics. Even in his larger lecture classes (200), he was taught by the professors, including the Chair of Mechanical Engineering. With some classes they also have mandatory small classes led by TAs and/or study tables. OSU offers free tutoring in multiple places. Our son attended study tables for the more rigorous classes. Our impression was the academics were very solid.

OSU has career fairs at least 2x/year and there seems to be a long line of companies recruiting from the school. It is a truly stunning campus, walkable, and walking distance to a quaint downtown along a river. It’s a mix of modern and older buildings.

The weather in Corvallis is gloomy from late fall through spring. No big storms or frigid cold, just constant clouds and drizzle. Very little snow if any. Students seem oblivious to weather. They play soccer outside in the rain. They walk around in shorts and a jacket when its 40 degrees. They have many athletic students and programs.

We are also from OOS. They give merit $ for high GPAs and SAT/ACT scores. Like many state schools, they throw $ at OOS students to increase their tuition/student. To lower costs/unit, OOS students can take classes at the local community college for in-state rates at a fraction of $ per unit and get OSU credit, it’s called the Dual Partnership Program. No CC on transcript, just OSU credits. But OSU is not cheap. Housing and dining are the most disappointing thing to us, but our son doesn’t care about it.

In the end, one of the things I really like about OSU is the flexibility. Our son had a programming class last year and really loved it. He didn’t want to major in computer science (CS) like most of his HS classmates in his HS robotics club. But because of this class, he’s minoring in CS. It wasn’t a problem like it is at so many schools, especially the top 100 where the majors are impacted/capacity constrained. Hewlitt Packard is headquartered in Corvallis. It’s not a rink-dink school. It has a high acceptance rate because of the state it serves (low population) 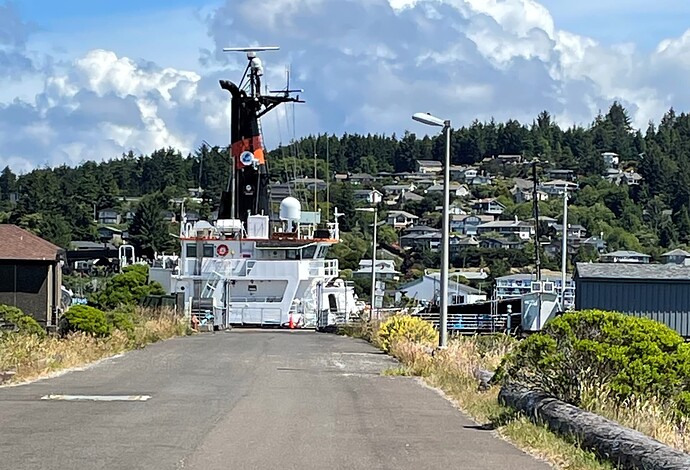 OSU Ship at Hatfield Marine Center June 2021 cropped1920×1309 272 KB
and (from my perspective) it’s location. I believe students get out what they put in. OSU has everything.