Good Luck to all applying. The deadline is January 4, 2022. Deadline to request an alumni interview is January 6, 2022. This year is test optional. First Year Domestic Applicants | Office of Admission | Rice University

I wouldn’t submit it unless it is at or above the average score.

D22 applied RD and is trying to request an alumni interview through the portal, but gets an error message saying the deadline to request interviews has passed. But she started trying on January 5, and the button right there on the site lists the deadline as January 6. Is anyone else having this issue?

Thanks for the quick response - she tried again a few minutes ago and was able to get through the process, so I think we are OK.

Hi, does anyone know how many people got into Rice last year as test optional?

Did anyone get an email about the externship today?

My daughter received the same email.

My son also received the same email. Does it mean that he got shortlisted? Not sure why they sent this email.

Not sure. What is strange is the use of the sentence “…forward to exploring in your time as a Rice University undergraduate”

Also if you click on the blue button the url has a tag that says “appadmit”. I am not creating a conspiracy, but it is strange.

Having said all this, it seems to early for admit decisions for Regular Decision pool

I have received such emails from other colleges too and one denied me.

My son received this email too. It’s just more marketing. Rice does a great job communicating its offerings with prospective students. I wouldn’t read anything into it

How much percentage of class is left for the Rd? I meant after filling up for EA/Ed

ED + Questbridge this year was 510, so figure that’s about 500 spots taken (a few will back out due to fin aid issues). Last year’s freshman class was 1,226, so I’d guess roughly 725 places left, though obviously that could shift a little either way. 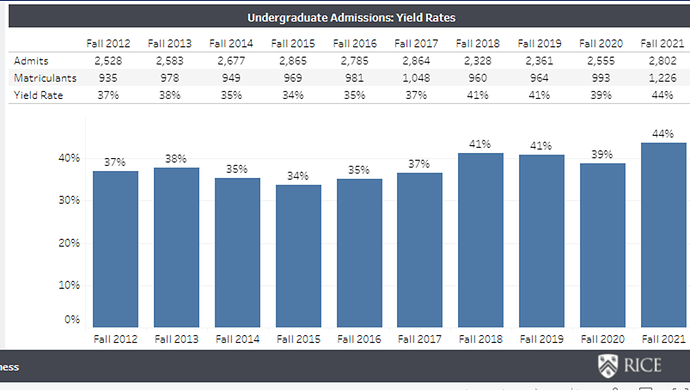 In an email that went out to the Rice Community a week or so ago President Leebron mentioned, “Early January marked the end of application season, and we now turn to decision season. Once more, we had a record number of applications, which surpassed 31,000. The increasing national and international reach and reputation of the university was reflected in our applicant pool, with 73% of the applicants U.S. residents from outside of Texas or international. Out of these applicants, we’ll select somewhat more than 1,100 students.”

Acceptance numbers are a little vague but it looks like the number of applicants is up. Last year Rice reported 29,544 applicants between ED and RD.

Last year the yield was way up as the graph shows. Rice also admitted about 250 more students than it did the previous year. Perhaps the extra admissions were a reaction to the pandemic and rumors of declining enrollments nationwide. Last year Rice did not go to the wait list and was scrambling to find housing for all the incoming students. Rice may pull back a bit from the large number admitted last year because of the 5 percent increase in yield.

If Rice is aiming for an entering class of around 1,100, and the yield stays around 45 percent, it may admit approximately 2600 students total to attempt to yield about 1,100. If 510 slots are already taken by ED/Questbridge, then Rice has about 2090 slots for RD offers. There is usually a small number of ED admits that don’t attend. Rice has announced a plan to increase the size of its incoming undergraduate class for the next few years, and a new residential college (dormitory) opened this year. Rice guarantees housing for incoming students. Rice may hedge its bets and admit a smaller number of students than last year. Rice did this when its yield jumped 2 percent from 2016 to 2017. If its yield numbers are off, it can pull from the wait list.