Well we are in the count down for mid-December when decisions roll out. I figured I would start a thread so people can post when they get their decision. I noticed some people received their decisions around the 10th of December last year.

I’ve been thinking about starting a thread, glad you did! Hopefully next week!

Good luck to everyone! It is a tremendous institution.

We too waiting for the decision🤞

Add my S22 to the list of those waiting. Looking at prior years’ EA threads, Rose-Hulman has generally gotten decisions out a few days earlier than the Dec. 15 deadline. Hoping they do that this year as well.

I also looked at previous years and noticed somewhere that the wording from Rose said “decisions BY December 15th”. It looks to me like we might know something at the end of this week. My kid has informed me that he is trying to forget about the whole ordeal until the decisions come out. So I am trying to keep all of this to myself. I have a RHIT t-shirt hidden just in case he gets in. If he does not get in, I will have to give it away. I am hoping I was not too presumptuous. He is my youngest and this is the last time I will have to deal with this kind of waiting.

LOL, I’ve done the same. My son already has a Rose hoodie from his time at Operation Catapult this past summer. I bought a couple new items for him if he gets positive news on his EA app (Christmas ornament, mug). Hidden away currently, and if he doesn’t get accepted they’ll never see the light of day. Fingers crossed for our sons.

He has the Catapult Tshirt. The bookstore was closed when I was on campus so I did not buy anything and my kid will not buy clothes unless under duress.

The ornament is a good idea. If he gets in, I suspect I will have a few years to acquire one.
Which session of Catapult did your kid attend? Mine was in the third session. Good luck to you as well.

Session 2. He loved his time there. He felt a really great fit in that environment: the other campers, the RHIT students who were camp counselors, the campus, the activities. We’re in San Francisco, so Rose would take him pretty far from home. But it’d be well worth it, if things work out.

My son had a similar experience. We are in the deep South and live in a very rural area where kids like the RHIT kids are very rare. So he was ecstatic to feel among peers. I need for him to be around people that want to discuss the kind of things he is interested in because he lost me a long time ago. San Fran is a good hike. We are about 11 hours away, so it can be driven but it is not a fun drive. I am factoring in flights when I evaluate costs and trying to rack up as many frequent flyer miles as possible.

On the Rose-Hulman reddit, a high school applicant asked about timing for EA decisions. The kid noted that based on prior years, Fri Dec. 10 would seem likely for those to go out. A current student responded, saying EA apps have increased a lot. And to expect decisions next week. His comment:

Admissions got many more applications than previous years so I would expect closer to their announced date (usually the 12th-15th). Source: work in admissions myself.

Won’t stop us checking the portal tomorrow though!

This may be a dumb question, but is there a portal? My son and I received an email stating that his application was complete, but there were no instructions for creating an account.

there are no dumb questions. did you apply online through Apply Rose? if so, you can access your kid’s application online. If your kid attended Catapult, you would have used the portal to submit vaccination records etc… and this is the same portal.

Yes, there is a portal. You should have received the instructions to login with an username (email) and a PIN.

Thanks for that update. I will still check tomorrow. I am going to guess that the increase in applications means that the acceptance rate will be lower too.

Yup, that occurred to me too. Competition got tougher this year. I’m actually surprised Rose-Hulman has been (relatively) under the radar for so long. Such a gem of a school.

Given how impacted CS has become, no surprise RH is getting way more applicants. With their CS outcomes (>$100k), its really a no-brainer to apply.

Glad I’m not the only one sitting around waiting for my kid’s decision letter. She was also in Session 3 of Catapult and I was so bummed the book store was closed when we picked her up.

At the parent admissions session they held during Operation Catapult pick-up day, the admissions rep was asked about Computer Science. Was RHIT using tougher standards for CS major applicants? The answer was ‘no’, for now. They have seen increased interest for CS, but are OK accepting all CS applicants who meet their standards. He mentioned that somewhere in the years ahead they might look at how they manage CS acceptances.

Looking at the Rose common data set for 2020-21, 73.1% of students majored in “Engineering”. 15.7% majored in Computer Science. In the Class of 2020 career placement report, CS had the second highest number of graduates (71), behind Mechanical Engineering (145).

This site is straight up messing with my head. I am going to be so bummed if I don’t get into RH. On paper I have good stats but feeling nervous all the same. 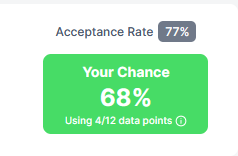