Students taking more than 4 years to graduate - where can I find info on school stats?

I’m hearing a lot about students taking longer than 4 years to complete an undergraduate degree. While some of that is understandable be due to changing majors, illness, purposefully going part time for some reason, etc - I’m concerned about the situations where colleges may not have courses available each year, or programs are so tough that students go lighter on courses to manage - AND that information is a “surprise.” Trying to reduce the surprise and plan for the added expense, if it’s a common thing at a particular school. Does anyone know of any resources for schools in the US & Canada regarding that? It’s not exactly posted on university websites. Thanks!

If you look on the common data set for each college, I believe you will find the 6 year graduation rate. The higher that is the more likely your student will graduate in four years.

IIRC there are some colleges where you actually must graduate in four years. Some small LACs really don’t have students taking a fifth or sixth year to graduate.

In addition to these reasons, schools where students co-op also take longer to graduate but it’s still 8 semesters, just spread out over 5 or 6 years.

Graduation rates are mostly correlated with admission selectivity. Colleges with stronger students tend to have higher 4, 5, and 6 year graduation rates.

This suggests that a stronger student is more likely to graduate in 4 years (or fewer), regardless of college, assuming affordability (money issues are the most common reason for not graduating at all, and may be another reason for late graduation if the student needs to reduce course loads to accommodate more work for pay). Note also that the stronger students are more likely to come into college with advanced placement, while the not-as-strong students may need remedial course work in college.

Going in undecided and not choosing first year courses to make progress in all of the possible majors can be another reason for graduating late. So can changing majors at a relatively late stage. Some majors with high volumes of requirements and/or long sequences of prerequisites need more careful attention to scheduling – not taking a course in a particular semester because of a desire to avoid an 8am time could mean graduating a semester or even a year late.

Also, please review the definition of graduation rate: both my students took courses during winter breaks and / or summer session. I think this caused them to both be categorized as “4+“ year graduates, even though it was 4 school years. One did double major with the “extra” courses, the other graduated with a teaching degree in those 4 school years.

This site may be helpful: https://www.usnews.com/best-colleges/rankings/highest-grad-rate.

With very few exceptions, a student can graduate in 4 years in any major at any college with a “normal” course load (typically 4 to 5 full courses each term) for that college. Colleges usually do their best to make the required courses available to the students who need to take them in order to graduate on time. Electives are, however, a different story. Depending on the college, students may not be able to take all their preferred electives at some (perhaps many?) colleges and still graduate on time. This is especially true in CS because of the popularity of these courses (yes, even many advanced courses) and the shortage of instructors.

The Common Data Sets show 4, 5 and 6 year grad rates starting in section B4.

Graduating in 4 years is correlated with income level and a school’s level of financial aid. So schools with relatively affluent students and/or those that meet full need tend to have better grad rates. It is more difficult to tease out other reasons for relatively low grad rates, such as not being able to get classes in the proper sequence due to overcrowding, or inadequately staffed departments.

Graduation rates are mostly correlated with admission selectivity. Colleges with stronger students tend to have higher 4, 5, and 6 year graduation rates.

That’s part of it. However, another large part has to do with family income. 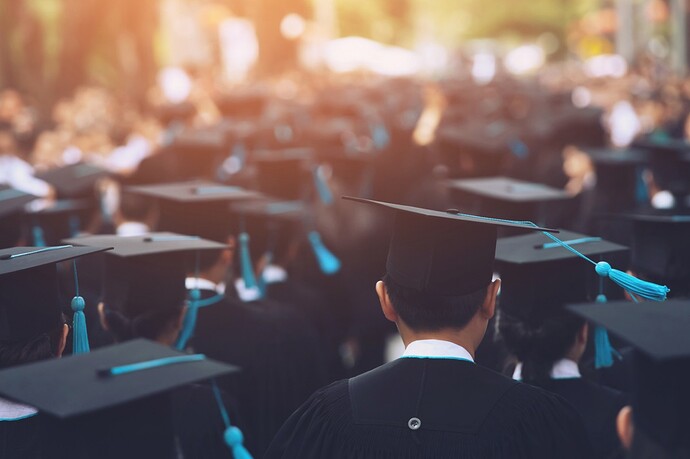 Family wealth is linked to students' odds of enrolling and graduating from college, according to new federal data, as well as the type and selectivity of college they attend.

Thank you everyone for your thoughts and helpful information! I truly appreciate it…

Money played a big part in my kids graduating in 4 yrs/8 semesters.

For one, and engineer, her scholarships lasted for 8 consecutive semesters only. If she’d gone an extra semester, it would have cost her about $30k. Her athletic scholarship and her state funding were gone. She might have been able to get a new merit scholarship but that wasn’t likely. So she plowed through and did a very traditional 8 semesters in a row, no summer programs. Many of her friends did co-ops and internships and I think the school found a way to extend the 8 semester rule if the student was away on co-op, but my daughter’s athletic scholarship made that harder to organize so she just went for 8 straight semesters.

Her sister took one semester off to do a Disney college program. She also did a semester abroad that only allowed 12 credits. She changed her major 3 times (!), so to graduate in 8 semesters she took classes one summer. She wouldn’t have had to, but it would have been two really packed semesters for her last two. The summer credits gave her some breathing room. She also had a scholarship for 8 semesters only.

Some kids, even those with high financial need, just don’t have the luxury to stretch out graduation. Mine were limited by scholarship and grant terms set by the schools or the state.

Keep in mind the why behind going more then 4 years also. We were shocked when we heard kids graduated in 5-6 years and schools didn’t make a big deal of it. But we went through it. My daughter changed majors and schools during her study abroad trip at the start of her junior year . Decided to stay in Indonesia and SE Asia longer, switch schools and got a presidential 1/2 scholarship to her new school. Can’t complain about that… Lol… So she basically redid her junior year at her transfer school adding another year but not the expense really due to her scholarship.

We were very clear with our kids. We were funding four years of college studies during the regular academic years and no more. One kid did take a summer class which the kid payed for.

I think one thing that is key…students need to be aware of when class registration takes place. They need to work with an advisor. They need to know their course sequences. They need to be willing to reach out to professors with full classes because sometimes they will add additional students.

The kids need to pass all of their courses.

’m concerned about the situations where colleges may not have courses available each year,

Small departments (more commonly found at small colleges) may only have the resources to offer certain courses (which may include major requirements) only once every two years. This gives students in the major one chance to take the course during their last two years. This means that, if such a course is required for the major, the student must take it when offered. If a student skips it for typical reasons like:

then the student will graduate late due to having to wait for the next offering of the course.

Additionally, if the course is a prerequisite for other required courses, that can induce additional delays to graduation.

the federal db, ipeds, is easier than searching for common data sets.

That’s part of it. However, another large part has to do with family income.