Clearly high gas prices do not impact everyone equally. 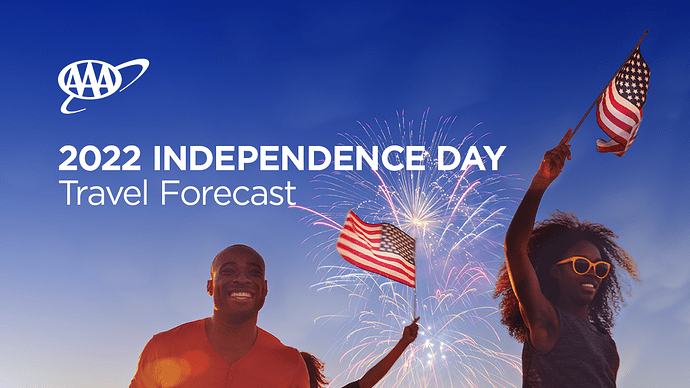 From Sea to Shining Sea: AAA Predicts 47.9 Million People Will Travel This...

ORLANDO, Fla. (Jun 21, 2022) – Summer travel is already in full swing and Independence Day will be no exception as AAA predicts 47.9 million people will

I wonder if the airline fiascos are prompting people to choose car travel over air travel where it’s a viable option?

My Subaru died and I had to buy a new car, early April. Happened upon a Ford Escape plug in hybrid. It had been ordered by the city as a fleet vehicle, but no longer wanted. I was a little skeptical, but I really love this car. I drive at most about 40 miles a day, city driving. All electric, mostly. I don’t think I’ve even used a gallon of the original tank. I’m also a slow, unagressive driver in a city full of slow drivers, so that helps. My electric bill has gone up about $40 a month.

But our solar project has stalled. We went with a small local partnership, which dissolved before they could start our job. The electrician was definitely retirement age. Our mistake. Now we can’t afford any of the other companies that gave us quotes. Prices are up 15% over three months. But we’re still looking.

Otherwise, we’re definitely eating less meat. Eating out less. Less spending in general. About to get rid of my chickens, actually, as the cost of chicken food has almost doubled in the last two years. I need more range space.

I’m just glad that H and I are working a couple of more years before retiring. To be honest H will probably never fully retire and will always do some consulting.

I paid $6.19 per gallon for premium gas yesterday at Costco. this was actually down 7 cents from the last time I had to put gas in my Acura RDX.

Re: eating less meat: my (picky) vegetarian husband likes a couple types of plant-based meats for protein; those prices are skyrocketing, as is the price of eggs. (Beans disagree with him…)

Yep, we don’t eat a lot of processed foods, so beans and lentils are what I’m taking about. Or actually, just using meat as a flavoring or topping, and increasing our veg. Most people eat too much protein anyway. I’ll probably change my tune on that when I hit my 60s.

I couldn’t eat beans this last year, but am slowly increasing the amount I eat, mostly to work through my Rancho Gordo Bean Club backlog. Yes, I’m eating expensive beans, but still much cheaper than meat. Anyway, he might adjust to them if introduced gradually. Like a couple of beans at a time, a couple of times a day. Then titre up from there. It really worked for me.

I don’t really have a budget and I don’t have real pressure either, that doesn’t mean I like inflation. You should see my flower budget last year, actually I didn’t have a budget there either, I’m limiting by the size of my yard.

Regarding gas prices, my husband paid $6.69 for the cheapest price for top grade at our local Chevron, he doesn’t use Costco, he needs supreme grade for his sport car, otherwise he has knocking effect.

Regarding meat, I bought tons of meat today(3 big steaks, 5 lbs of ground meat) and I’m not a red meat eater either, but the price was reasonable and so I grabbed them. I prefer to make lasagna with meat sauce, much easier to eat and freeze. We also bought loads of vegetables and fruit, one good thing I like about summer.

We always have a huge vegetable garden but missed the planting this year with lots going on. I did notice prices for plants were MUCH higher than previous years. We usually spend about 200-250 on the plants. This year would have been double. Seeds have almost tripled in price esp for lesser known things. I think there’s a lot of pressure on farmers.
The price of fresh eggs from the farm went up a little but didn’t double like the grocery store.
I cannot believe how many people are paying $6.00 plus for gas. Guess we’re all headed that way. I think it will go to $10/gallon easy.

It is hard to give up record profit margins…

A few will profit, of course. However, those higher margins would have to be discounted at increasingly higher interest rates, so most will suffer ultimately.

It’s not the profit margins per se, but the employment numbers. If profits start to plunge, so will employment and its the latter that is part of the Fed’s mandate. In other words, the “wishful thinking” is the so-called soft landing: profits decline to the minimum to not trigger layoffs.

A few will profit, of course.

The ones whose prices are the biggest drivers of inflation (i.e. where price inflation is greater than overall):

Who gets hurt the most are those who have to buy products and services from the above disproportionately (including where the products and services they buy depend heavily on the above). Because transportation is embedded in many things, and transportation is still heavily petroleum dependent, many other things are affected to a greater or lesser degree. Demand has also increased for substitution goods (e.g. electric and fuel efficient vehicles).

My post is way up in this thread, but I expect inflation to be coming down already and will continue to come down as rates rise. The Fed flooded the market with liquidity, and it spiked prices across asset, service, manufactured goods, and commodities. It was stupid and reckless by the Fed, but they are belatedly correcting their mistake.

Inflation is going to come down as Fed Funds rates approach historically normal levels of closer to 2.5% and the Fed unwinds QE at the rate of around $80 billion a month. There are some other things going on in the market, but let’s see what happens when we get rates up and another few months of tapering behind us.

Inflation is going to come down as Fed Funds rates approach historically normal levels of closer to 2.5% and the Fed unwinds QE at the rate of around $80 billion a month.

2.5%? Inflation is running in double digits (and exceeds double digits in some essential categories). 2.5% short-term Fed Funds rate isn’t nearly enough to tame inflation. If the Fed does unwind all its positions acquired in its previous quantitative easing operations, long-term rates will dramatically rise too. Unfortunately, high interest rates (and a likely recession) are almost unavoidable to tame high inflation.

The inflation curve is not a linear relationship to interest rates and overall liquidity. The Fed pumped trillions of dollars into the economy through QE and then left interest rates at 0% long past when the Fed should have started raising them. That hit at the same time that there was a demand backlog from the ending pandemic and the pandemic changing living conditions causing lots of people to move. All of this drove prices, but none of this was an organic inflationary cycle.

All that liquidity had to go somewhere. Think of it like a flash flood. When too much liquidity showed up at once, it had nowhere to go and prices on everything spiked very quickly. Now the liquidity is being pulled back, and like with a flash flood, levels should drop rapidly. The NASDAQ dropped 30% from its Fed fueled high, and home prices are dropping (on a $/sq. ft basis) in most markets. That is off a 1.5% rate hike over 4 months, with a prediction of two more 0.50% rate hikes in the future.

At the same time, the Fed is tapering $80-100 billion a month from its balance sheet, basically taking money out of circulation. I have no problem with continuing this for the next few years. Like I said above, I like QE as a short term solution to market dislocation, but it loses its positive impact on the economy after a few quarters and basically becomes a subsidy to big banks.

We are feeling it at my house.

My H commutes 100 miles rt 4 days a week, in a sports car that requires premium fuel. It’s taking a big bite out of our disposable income, for sure.
Increases in Food costs are noticeable, but less painful. We eat very little meat to begin with, so buying a little less to stay on budget hasn’t felt like a huge sacrifice.

I am definitely putting off a lot of discretionary spending, though…continuing to stockpile cash reserves.

Thankfully, other than a fixed, sub 3 percent mortgage, we don’t currently carry any other debt.

I believe my job could withstand a recession- not as sure about my H’s.

I agree with your analysis, but not the timing. Once inflation gets baked into labor/wage expectations, it is much harder to eliminate. (Which is why the Fed was way behind in raising rates and reversing QE.) And current policy appears to be designed to maintain high energy prices, which touch upon everything in the economy.

Inflation has started to show up in wages. IMO, it will take a lot more than 2.5% to make it disappear.