Tips helping child get an apartment

Thanks! Yeah I was surprised there wasn’t a university specific off-campus housing listing. She met with many grad students and went to all the grad student orientations and asked about this. No one said anything about an off-campus housing listing service. I am going to pester her to contact the housing office and department office to double check. I used Craigslist when I was a grad student but now it is so overrun with scammers. I basically look to see if there is a property management company listed and then look directly on their website.

Thanks for the tips too about things to look for female clients!

Thanks! All this info is really helpful. I think next step is for D to pick a few that look good and she/me(lol) start calling some property management companies. The rental market is quite hot but fortunately with a roommate lined up, there looks to be quite a few affordable options in the neighborhoods she wants.

Use Apartments.com to screen for location, unit type & rent to narrow the list of potential options.

Once you’ve done that, try to identify the property management companies associated with the top 10-15 prospects.

Then do your diligence on those companies. See what their local presence is, how many properties they manage, what kind of company they are (a national/regional or "mom & pop). Google them and the name of the apartment project. Tenants aren’t shy about complaining via social media, so lots of “horror stories” about a company or specific property would be a red flag.

bookmarking this as my D16 is going to grad school 1300 miles away in a town weve never been to.

there is a facebook group i’ve found for her for people in that town looking for places. besides that, she’s rather clueless. we are running out of time and feeling slightly stressed! not sure if she’s done apartments.com though- i’ll have her look there.

I was just reading an article about the super hot real estate market in Kingston NY, which mentioned that Boise has been #1 in price growth even before the pandemic.

Craigslist, Zillow, and Apartments.com may be of help but we also used a real estate office that tends to focus on students.

In general, we have had better experiences with managed properties.

Thanks for all the comments! I have a plan now on how to move forward. I wrote the post while feeling a bit dejected after D’s plan to spend a week in Boise w her roommate looking for an apartment fell through. Then I went online to help and discovered that

It was after calling 4 different apartment complexes geared to students and finding out that they are full that I kind of lost it. I was frustrated that this had been put off so long, especially given that I need to co-sign and probably need to be the contact given that my D can’t qualify (at least according to websites) even given a good grad student stipend, savings and credit rating. It would be different if she were in Boise and could talk to managers face-to-face and had a rental history, but she is not and was in undergrad housing all 4 years at school so has no rental history.

But I now have at least 1 property management agency that answers my questions and is fine with an out-of-state co-signer. And I have a plan for how to get qualified with 2-3 more—following suggestions from above.

Here a few links that I am finding useful.

Links
https://www.trulia.com I really like this one because it has a crime link and you can see where the ‘hot’ spots are.

https://www.apartmentratings.com This one has some reviews.

https://uloop.com Search for a school and then click housing. Not clear that it is really school specific but if looking for a roommate, there is a way to post your info there or find a roommate there.

Generic search sites. I have had 0 luck using the ‘contact’ links on these search sites. So far none have gotten back to me but I’ve only done that for 4-5 properties. Note there is a lot (90%?) overlap between what is listed on these so not sure you need to look at all of them.
https://www.zillow.com

From the ground up, we reimagined ApartmentFinder.com, developing a brand new website and apps! Backed by a national research team, now ApartmentFinder.com provides smarter ways to search through more listings than any other rental source, providing...

Apartments and Homes for Rent | ForRent.com 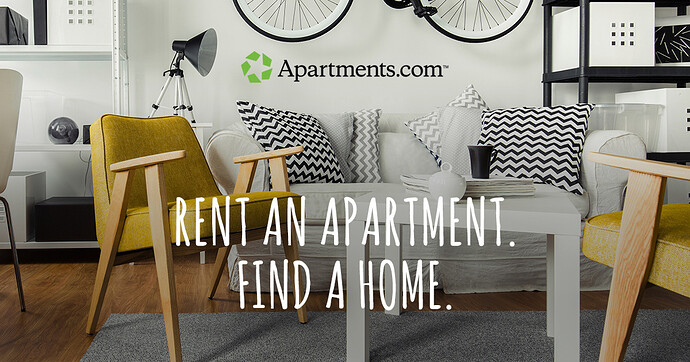 Apartments.com: Apartments and Homes for Rent

We simplify the process of finding a new apartment by offering renters the most comprehensive database including millions of detailed and accurate apartment listings across the United States. Our innovative technology includes the POLYGON™ search...

Finding property management companies. I use links above, then the management company will be listed somewhere. I search their name and find the company website. I can search for properties from their website too and apply. I am calling before applying since I don’t want to waste my time if they won’t accept an out-of-state co-signer or require signing in-person.

So far I haven’t figured out how to find a realtor that caters to students looking for apartments. That’s my plan B. A fellow student in D’s lab has offered to go look at apartments, but if that turns out to be onerous, I’ll turn to plan B or we’ll travel there for a week.

Be cautious about online reviews for apartments in major US cities as most seem to be the work product of the apartment management firm or leasing agents.

Example: In a major east coast city, the first dozen or so online reviews were very positive, but then a review nicknaming the complex “Murder Motel” was discovered and found to be accurate.

Update During our Boise visit in March, we had driven by some apartments in an area that looked really nice. Close to campus and along the river. No availability was shown on any of the apartment sites. On a lark, I called one of the apartment buildings and inquired re availability. None available now, but then I asked where they posted availability. ‘We don’t post. We don’t need to. Openings fill quickly.’ Wow. Then I switched to a new tactic today. I used Google to find all the apartment buildings in the area of interest. Called and asked re availability and price. Put a deposit on a 2 bedroom apartment 30 minutes later. Fingers crossed! It is still contingent on D’s (and roommate’s) applications being accepted. But this management company is super professional and responsive and I’m working with a specific agent at the company (the agent who picked up the phone when I called).

Note there was a lot of background work over the last 3 days to figure out the going prices, look at apartment reviews, and identify the neighborhoods of interest. D had also put in 2 applications yesterday but lost out (unit already rented). So we were ready to jump on anything that looked good. Also D looked up her credit score yesterday so was able to provide that to show she is a viable applicant.

Yeah, it’s rough for the current renters. Landlords are upping rents a lot when renters renew. D may be priced out next year but by then will be living there and can look for a house with more housemates.

Inflation is coming–if not here already.

If young adults have extra money to invest, land may be a good option to consider. For example: I have been surprised how affordable vacant land is just 30 minutes outside of a major Southeastern US city (15.3 level, green acres (subdividable) for $150,000 with nearby utilities, ready road access, & near a major lake).

My wife and I just went through this in April because the Boise State student housing wanted them out in early May. Even though Craigslist can be shady, we used it and got a lot of leads. I just saw this post today, or I would have responded earlier…nobody on CC ever discusses much about Boise State.

The neighborhoods I would recommend are the Bench and the North End. The North End is super trendy and nice, but they had affordable places. However, these factors make it very competitive. My D and her roommate tried for one by the co-op, but didn’t get it. They ultimately ended up in the Central Bench. The Bench is nowhere near as trendy as the North End, but this area is really the best “college” area that isn’t necessarily right adjacent to campus.

You might find something in the neighborhood just east of Broadway and this is real close to campus too.

As for campus housing that isn’t undergrad style, but grad style adult style apartments, those are difficult with long wait lists.

I’m not saying avoid Meridian, Nampa or Eagle, but those will be a little further out and a tougher commute. Don’t settle for that.

The city is pretty small and bike friendly, clean and relatively safe. But this is still a city, and tell your daughter to avoid the Greenbelt at night alone.

As people in the thread have already noted, the Boise real estate market is white hot and has been for years.
Boise is a great town if you like the outdoors, friendly people and can handle the winter cold.

D (ok, me) found a 2-bedroom apartment in their price range east of Broadway and south of the river (SE of campus). It’s an area that we had walked around in during our March visit and really liked and is within easy biking distance to BSU. I’d been watching that area since March to see how often things come up there, but really didn’t see anything. I found the apt by calling the management companies for the complexes directly. Just looked at Google maps for buildings and started calling.

After losing a couple places and seeing popular units disappear after a day, we decided to sign the lease sight unseen. Well not quite unseen, we did walk around the complex from the outside during our visit. Didn’t find too many reviews online and the ones we found were fine, just complaining about dated appliances and the shared laundry room being too small. Maybe I’ll gift them one of those small efficiency washer/dryers (though they’ll prob prefer the $ to go to rent).

Next year D will know the area better and can search for things in person. She’ll also have a rental record and be employed in Boise so that’ll change things. D grew in a city so is fairly saavy but I remember that in grad school I’d often work really late and bike home at all hours. Later my university started sending out alerts for violent crime and I was shocked at the number of armed muggings that happened each week. I’ll try to impress on them the foolishness of biking/walking home after dark.

Awesome. I hope this works out for you. I know my wife was on this for a few days and struggled at first, but I think her main source of stress was coordinating with the so-called “adult” on the ground in Boise who was “busy with school and work” and wasn’t really helping much. Once she was cut loose, the real adult sorted things in a matter of days.

I laughed at “D (ok, me)” because that sounded all-too familiar.

Boise PD are pretty visible and the Campus police are active too. Your student should get a “Bronco Alert” if there is any suspicious activity on or around campus.