Trip to Ireland and Scotland this week

My kid is going to Scotland this fall, I hope she takes some good pictures.

Those of you who have flown back to states from Dublin can you tell me about the pre-check or whatever it’s called in Dublin? How does that work? And does it mean you don’t need to go through customs and all that on the return?

Yes you come in as a domestic passenger in the US so no need to go back through immigration. I thought it was great - I’m always early to the airport so would much rather tack it on the front end than after we’ve flown. It was basically just like going through it at home. I didn’t know it was going to happen but given we were on the early side anyway it was fine. I doubt it added more than 1/2 hour, maybe as little as 20 minutes. Don’t know if it’s always that fast.

It isn’t! Dublin regular security, US 2nd security and US immigration wait times have been wildly uneven since coming out of Covid. Global Entry helps hugely, but TSA pre-check doesn’t apply at all. If you are flying front of the bus you will get Fast Track through Dublin & US security checks, which helps quite a bit, esp when it’s really busy. There is (of course) an app for that: Dublin Airport (official), which gives you gate info, flight delays, and at the bottom of the page current (Irish) security wait times (10 minutes as I write). Be aware that the vast majority of US flights leave between 8am-noon, and the chaos level can be high. If the airport delays are particularly bad shape it will be on the radio.(esp RTE1), and the DAA will be running warnings.

We found the security process departing from Dublin pretty stressful and chaotic. After we were at our gate thinking we could relax, my husbands name was called and apparently he was designated for a random higher level screening, which didn’t occur, so they took him back downstairs and put him through security again. He knew that they would hold the flight for him, but it was nonetheless stressful for him.

Should have mentioned my experience was pre-COVID. Sounds like it’s worse now. Too bad! I thought it was so great to be able to land and just leave the airport as a domestic passenger - I’ve spent hours waiting to go through immigration after a long day of traveling and it sucks. Much nicer to get it done before the flight!

That part is still true! You still clear customs & immigration in Ireland. It’s just that - same as many airports- the staffing levels haven’t recovered

Thanks. That helps put it in perspective a bit better.

We’re east coast so our return flight would be in the afternoon. Looking at at 4:45pm departure. So sounds like we would need to budget plenty of time at DUB on the return, but we should have plenty of wiggle room for that. How much time would you allow?

And just curious how long does it take at the airport in Dublin on arrival? We will probably be arriving hellishly early on no sleep —like 5am.

Dang, those flights change fast. The afternoon departure from DUB disappeared and now it’s an 11:15am departure.

Reviving this thread to say we are pretty much booked for our week in Ireland in two weeks.

We’re going to fly out on Sat and into Dublin on Sun, arriving at the crack of dawn (5:20am) and then will catch a bus to Galway where we will have an AirBnB for 3 nights and will visit with our friends. They are booking us and them on a bus tour to the Cliffs of Moher and the Burren on the Monday. Sunday we will probably be trying to adjust to the time difference and getting settled in. Tuesday we will explore Galway.

Wednesday we take the bus back to Dublin for two nights. Thursday we will have for Dublin. We are going to see the Book of Kells (big fans of “The Secret of Kells” and “Song of the Sea” when the kids were younger), but don’t have anything else planned right now. I do love the look of Newgrange, but I think that might be too much for such a short stay.

Friday morning we fly out to London (arriving 11:10am) where we have an afternoon and evening before leaving on Saturday morning at 10:30 and arriving home at 2:30 Sat afternoon. Wasn’t really looking at going to London this trip, but it just worked out better for the flights. It’s a direct flight home from London.

It’s a bit whirlwind but we’re doing it over D22’s Fall Break and while our friends are in Ireland teaching this semester.

Hubs has taken on the phone task. I booked all the hotels and flights. I will let him deal with the phones.

During our half day in Dublin (we arrived at 8:45), we visited St Stephen’s green and the National Gallery. Just kind a did a walk about the city center. I thought it was interesting that the Prime Ministers office is just down the street from the Gallery. We walked by and it looked like it might be a somewhat important place, but there was no one around. I read the plaque on the gate, and thought it said it was the PM’s office, but couldn’t believe it, so I asked a couple who were nearby what it was and they confirmed, and said his office isn’t really a big deal like in the US.

A couple of people recommended this museum, but sadly, we were too tired to go. 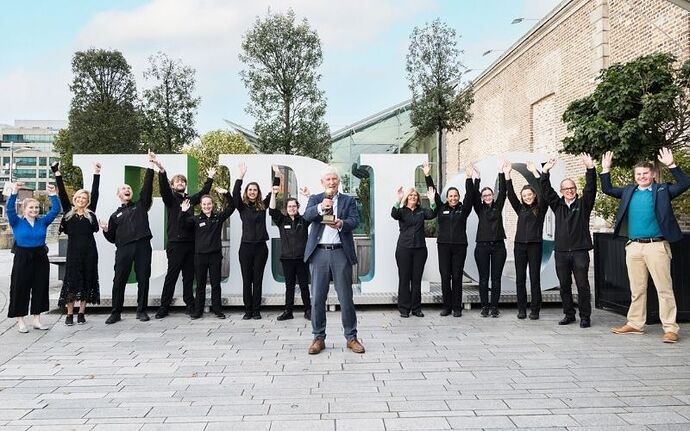 EPIC, a stunning museum in Dublin's Docklands that tells the story of the Irish people who left Ireland and how they influenced and shaped the world! Book here!

Thanks for the tips! I think we may just be kinda winging it a bit. My young adults and the husband for that matter don’t necessarily like it when I over plan.

Haha, my fam is the opposite! I have to have everything planned out, and I get frustrated when they ask me a million times, what are we doing tomorrow?

But, we really just winged that day too since I knew we’d be tired from the flight over. Just took off walking and figured it out as we went along. The rest of the trip was all planned out just like they like it!

Hope you guys have a great trip!