Do you have any Habitat for Humanity/ReStore building salvage places near you? We have to drive an hour to get to the nearest one, but they have dozens of solid wood doors that are super inexpensive. We got 2 of them there that we were able to cut down to size to fit our shed.

I’ve made yogurt in a thermos even easier!

We don’t, but H ended up repainting the door and putting a nice screen in - which works for the workshop since it’s not climate controlled. It looks much better now.

I love being married to a guy who can fix practically anything, and do it well. Thanks for teaching him a ton FIL!

We are still liking our choice to add a compost bin to our trash bin a few months ago. It costs $6/month (and will hardly get used in winter months, since mostly filled with yard waste). But by downsizing to half-sized trash bin, we actually end up saving a few dollars per month. So every week we put out the small trash bin and alternate the the other/larger bin (recycle OR compost).

With just the two of us, there is not a lot of kitchen compost (even though we can add paper towels, napkins, tissues). So we have a small bin on the counter, with a sandwich plate on top. Trader Joe has compostable bags for produce, nice as a liner. When none available (we don’t shop there much) I use a cereal bag or other bag which gets put into the trash after contents emptied it compost bin. This is still an interim solution, as we live with it more.

What I reallllly want to do is stop using trash bags i the kitchen garbage can, since most yucky stuff goes to compost (city collection allows meat/bones, which you would not put into a backyard compost bin). That’s a hard sell for my husband, so we are still discussing.

That’s a great deal, Colorado_mom ($6 mo). I was at a farmer’s market recently and a local compost company was charging $20 a month. I was still tempted b/c I really want to move to composting (hate seeing all the food refuse go into the trash!).

Adding the compost bin is an especially good deal since we actually have a net savings of about $4/month by switching to the smaller 48 gallon trash bin (which is plenty for the two of us, but even a family of 5 at church says it works ok for them too).

We actually don’t generate all that much in food scraps. We only fill this bin on the counter once or twice a week, including some napkins. (It’s not that pretty - we are still experimenting). 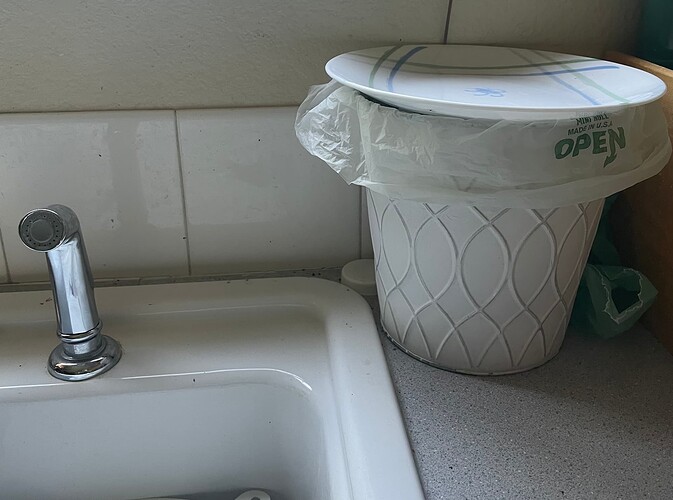 For us the biggest boon to composting is the yard waste part. For decades we had wastefully put into the regular trash. In retirement we’ve been running it to the waste diversion center in town, a bit of a pain. Now that we’ve switched to curbside compost, it’s much easier. Plus I let the neighbor put her lawn clippings in too.

Details would vary by location, but here’s what our city curbside compost bin accepts… 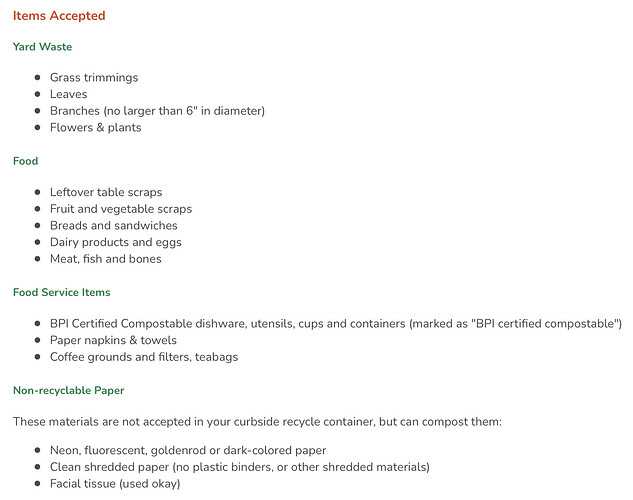 Thanks, Colorado_mom. I feel terrible putting the yard waste in plastic contractors’ bags that will take decades to degrade in a landfill! We have started putting our yard waste (weeds, grass clippings) in the woods near our house which has helped but still would like other options. I’d also always feel bad putting the dog waste in trash cans (when we had pups). I wonder if most composting places would take that? I don’t think I could get another dog until I figure out how to dispose of the waste in an environmentally friendly way!

I have changed several habits since moving to the city:

Compost bin- never had one before, but the city provides a large bin and we have a small one on the counter. It was very easy to start making this a habit.
Buying/having less: we downsized and got rid of a lot (hello, Buy Nothing!). We bought replacements for a few things, but emphasis on FEW.
Walking on errands: new neighborhood is very walkable so we try to do this as much as possible unless the weather is bad.
Shop local: Farmers market, small local grocery chains, co-op (it’s walkable), small businesses as much as possible.

@Jolynne_Smyth - That’s a great idea to put yard waste in the woods. I’ve switched to a mix of city bark chips (created from limb collection) covered by the prettier bark chips in poly bags. But I decided that I can break up some of my own sticks for areas behind bushes where I mainly just want to keep the weeds down. Per dog waste, even our city with extensive list of items for compost says to put it in the trash bin.

I agree with @FallGirl, but I draw the line at dog poops and recycle my own urine. I have no idea what things I will attract if I do them. I threw away fish guts even. Nothing raw. Only vegetable waste.

For our compost we only use non cooked items. Has to be raw. We also don’t pour oil on the pile. No waste (human or other).
We’ve always put lawn waste in the woods (used to put the old Xmas trees there too). We don’t have woods any longer just fields so we break things up as much as possible and we’d put grass clippings in the compost pile or just in an area in the back.

Funny, I did all this when we moved to the “country” We loved picking veggies with the kids at farm programs and we always bought at farm stands in the Summer. Still do. Small biz-oh yeah. My grandparents shopped local and we have always paid a premium if necessary to keep local places going. We don’t do big box stores or Amazon unless it’s absolutely necessary. We do love having the egg lady, the butcher and all the rest. They provide great products and we know them all by name.

If you have space for a compost bin you could compost the dog poop. You would want to make sure it gets thoroughly heated to kill any pathogens and you wouldn’t use the finished product in any areas that you were growing edible plants though. You could also use worms to compost the poop.

There is a product called the Doggie Dooley that is basically a septic tank for dog poo. There are also biodegradable dog poo bags if you want to throw it away but feel bad about the plastic bag.

We just compost kitchen waste and yard waste in our backyard. Easy peasy and free. There are only a few things we don’t compost. We don’t eat meat so pretty much 100% of our kitchen waste goes in there, but there are a few noxious weeds that we will bag up and throw away rather than let spread through the compost (either by cuttings/roots or seeds).

Just have to say that I often see these by the side of the road, on the beach etc. Not sure why people don’t just let the dog go off the road (countryside) if they don’t plan to scoop it. Instead, they leave these biodegradable bags for others to deal with. I have seen a ton often after a weekend. Why? I think people( out oft owners) use them to feel better about leaving a hot mess but they don’t want to take it with them or carry it to a trash. Honestly, as a walker, I’d prefer they don’t use these bags. YMMV.

No, they’re the biodegradable types. I used to buy them. They are a particular green color. They ARE biodegradable ( and I’m sure they do work). But it takes time for them to break down. I’ve seen the beach people picking them up. So rude of people to do that.

A friend of mine who lives on the beach had to start locking her trash as people used to dump their dog doo in her bucket.

I have never understood why people bother to bag dog poop and then just leave the bag or throw the bag into the woods. So stupid!

I think some people leave the bagged dog poop along the trail, with good intentions to pick it up when the pass by on return trip… but not always with follow-thru.

And then some other dumb jerk sees the dog poop bag that someone is “going to come back for” and figures its fine to leave their dog poop bag on the side of the trail/road/whatever too.

I did have a friend that used the droppings from their pet rabbit for composting with yard waste. She figured it was not safe for vegetable garden but said her flower gardens just loved it.