What constitutes reaches, matches, and safeties

UCLA doesn’t consider SATs, but how many valedictorians with tons of rigor get rejected by UCLA?

7 out of 10 from my kids’ school. Including some that were accepted in T10 schools.

But that’s my point— if they are evaluating the same essays, same ECs, and those essays and ECs are flawless— then there is no common reason to get rejected at every T20 school.

If you acknowledge such a student does have a 10-20% chance, then that does mean they are likely to get into a T20 school if they apply to a large bunch (if that’s really their interest).

If you think a valedictorian with 1580, 10 APs, great essays and ECs… if you think they are unlikely to get into any T20 schools, you basically are saying they have a 0% chance at each school.

I’d find it surprising if a kid was truly interested in anything approaching all USNWR T20 colleges. They are very different schools, with different strengths and weaknesses. A kid might be happy at one and miserable at another. One college might do a great job at helping a kid achieve long term goals, and another might offer little support towards his/her goals. Caltech, Chicago, Notre Dame, and … are not all interchangeable with one another because they are T20s, Regardless of chance of admission, it’s not a good idea to blindly apply to all of them, or even a large portion of them.

If a high stat student is really dead set on getting in to a T20 school and doesn’t care which one, then a better approach might be to look at Naviance type scattegrams and review which ones appear to admit the largest portion of applicants with stats in the applicant’s range. The applicant might focus on such schools, including applying to one of them in the early round. When applying to fewer schools, the student can take more time per application, which can improve application quality and save time for other activities.

For example, I’ve haven’t seen recent post-COVID scattegrams for Vanderbilt; but pre-COVID, Vanderbilt scattergrams used to show a wall of acceptances after crossing a particular stat threshold near their reported 75th percentile stats, almost as if they were trying to boost reporting stats. Their sponsoring and emphasis on NMSs could also contribute. In contrast, many other T20s reject the overwhelming majority of applicants with near perfect stats who do not have much that excels compared to the applicant pool besides their stats.

I’m not actually suggesting any student simply go down the list and apply to every T20.

My point is simply that admission to the T20… especially T10-20, is not nearly as impossible as often stated around here.

Where a school has a 10% acceptance rate, it’s not 10% across the board. It’s 0-1% for the unhooked, modest stat kid who applied as a high reach. (Almost any unhooked kid who doesn’t submit a test score is in this range). It may be 5% for the kid just barely in the median range of their admittance range. It may be 60%+ for a hooked with with elite stats. May be 30% a unhooked kid with elite stats and experiences, and 30% for a hooked kid with median stats (median for the particular school… so only 3.97 instead of 4.0).

But that’s exactly what I said — some common defect in the essays or school record causing a shutout.

It’s not like AO’s are identical robots, where they have the exact same subjective preferences in reading essays. If there is something in the essay or LOR or EC or school record causing a shutout, it’s something objective. Not opaque and subjective — not like they all will universally deny a student if they mention vanilla ice cream in the essay but admit them if they mention chocolate.
It may be opaque to you and me — as we don’t have access to the essays, don’t see the details on the ECs, etc.

But no matter how holistic schools claim to be, their process is still largely objective. While it appears opaque from the outside, it’s not quite as opaque as it seems.

Where a school has a 10% acceptance rate, it’s not 10% across the board. It’s 0-1% for the unhooked, modest stat kid who applied as a high reach. (Almost any unhooked kid who doesn’t submit a test score is in this range). It may be 5% for the kid just barely in the median range of their admittance range. It may be 60%+ for a hooked with with elite stats. May be 30% a unhooked kid with elite stats and experiences, and 30% for a hooked kid with median stats (median for the particular school… so only 3.97 instead of 4.0).

And it may not be the numbers you speculate it is. You are just inventing them out of hot air.

The problem with throwing numbers like that is that some impressionable kid will read them and say “There is NO WAY I don’t get accepted to T20 if I am valedictorian, have 1580 SAT and 4.0 GPA”. They will apply to all T20 (and nothing other than T20) and then wonder what happened.

The poor kid wouldn’t know that your numbers were “illustration”.

That’s certainly not what I am saying. Our school routinely sends kids to top schools, and the vast majority of them are unhooked. There are a lot of “average excellent” kids from our local public school that get into places like Vanderbilt, Cornell, and Wash U. Between just those three we are talking 25+ acceptances in 2020, the most recent year I have data for. As we go further up the rankings, the number of acceptances drop, but in a typical year we still have a kid or two that gets into a majority of the HYPSMs, again unhooked. It’s also pretty obvious ahead of time who is likely to get that.

What I disagree with is your extrapolation of a 10% admit rate into the number of acceptances. You made a calculation that required independence, which does not hold.

How does my extrapolation to 30% turn into “no way I get rejected.”

Simply telling every kid “you have almost no chance” isn’t helpful and isn’t true.

How does my extrapolation to 30% turn into “no way I get rejected.”

Do you remember saying that there is about 1% chance for a kid with these stats to not get accepted to at least one of the T20s? That’s how.

I hope that you at least realize, that your speculations on these probabilities depend VASTLY on the distribution of the stats of the applicants. If 90% of the kids that apply are “4/0/1580/great ECs, rigor, etc”, the actual probability is very close to the acceptance rate announced by the university.

And the fact is, that you have no idea what the distribution is. Because nobody posts data on that.

If I give numbers for illustration, you object. If I say “solid chance”, you want the number? Which is it?

But that’s not even mathematically possible. That’s not what the applicant looks look like.

Have you read common data sets?

Reminder that as per TOS and Forum Rules, debate is not allowed. Addressing another user repeatedly is probably going to be considered debate. Take such conversations to private messages.

Agree that it is unlikely there is anything particularly messed up in their app. But I also think it likely that their app missed a “spark” that lifted their app above a large pile of qualified candidates – its not necessarily the lack of a hook (hook meaning ALDC, URM, low SES, sparse country). There are plenty of kids admitted to more than 1 T20 to indicate that in hindsight, there was a common element(s) that made them attractive to more than 1 set of AO’s.

Certainly “unhooked” kids with extraordinary qualities or accomplishments can separate themselves from the large pile of unhooked, high stat, highly accomplished kids, especially when they apply to schools which appreciate (or even recruit) for that particular accomplishment. But in a sense these kids are the exceptions that prove the rule. The most competitive schools receive a vast surplus applications from accomplished, high stats kids from overrepresented demographics, so they can pick and choose the truly extraordinary and/or to meet their institutional goals. Some (but relatively few) will get in even without a clear, distinguishing “spark," but most won’t.

I am not aware of anyone who has written anything remotely close to this.

Setting aside the hyperbole and returning to the topic . . . A reach is generally understood to be a school where the applicant would have up to about a 30% chance of admission. Unless a high stat, highly accomplished but unhooked applicant from an overrepresented demographic has an extraordinary “spark,” most of the highly rejective schools will be reaches for these students. That doesn’t mean they have zero chance of getting into a great school, but it does mean they should create a balanced list which includes options where their odds of admission aren’t so long. 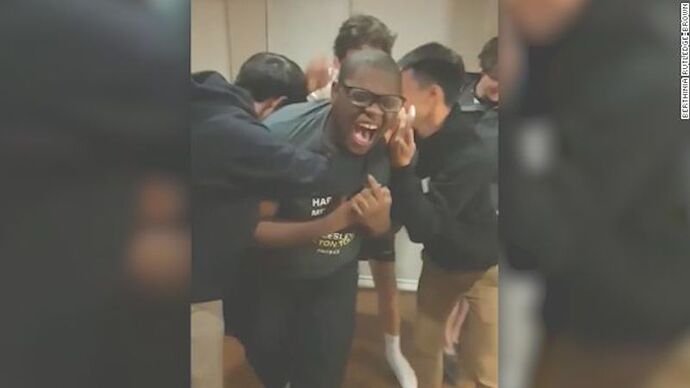 Micheal Brown stared at the acceptance letter in front of him: It said yes.

Where I disagree— the idea that no student has over a 30% chance at a T20 school. That may be true of T5, but I know it’s not true of T10-T20, where a perfect GPA, high rigor, 1600 SAT, great ECs matching your program, great essays, etc… will definitely give you a far better than 30% chance.

What I find informative, our school switched from Naviance to Scoir… and Scoir more clearly shows acceptance percentages. While the sample sizes are small, and too small for certain schools… with schools with ample data… you see a clear line of the region where acceptance is nearly 0%, and the area where it’s 60-100% depending on the school. And that’s solely GPA and test scores. If you also were factoring in rigor, EC, essays, hook levels, etc… you could draw an even more accurate picture. No, you can’t make predictions with total accuracy. But it’s not as opaque and random as many would suggest. The valedictorian with a perfect GPA, 1600 SATs, who successfully petitioned Congress, wrote an award winning novel, and personally raised $2 million for charity, has more than a 30% chance of getting into T20 schools. Much higher.

Agree completely: the naviance data of the local schools (2 private, one public magnet) I have seen reveals a similar pattern: for a few schools in the top10-25, the admission rate above a certain gpa/score range is about 60-75%. Access to rigor/courseload would very likely push it higher. The tippy-top schools are harder to sort out, but there is still an obvious area where it becomes 25-33% admissions based on gpa and test scores alone.
For true top kids(Val, top scores),at these specific HS, admission to many schools in the top10-25 approaches 100%.

For true top kids(Val, top scores), admission at many schools in the top10-25 approaches 100%.

This is flat out a dangerous message to send to HS students and just false.