What I wish I Knew Before Entering Boarding School 2022 version

Agree with above - the kids we knew who could do well in club sports and school were the ones who were either day students, had homes within 2 hours of school, had cars (that’s another story), and had $$ parents who bought houses or rented apartments near school or club team so they could spend the weekends trekking for club.

Golf is another story ….so if you have a golfer and want info DM me on how to work that out without being on a school team or looking at a school without a team. It can be done.

Agree with above - the kids we knew who could do well in club sports and school were the ones who were either day students, had homes within 2 hours of school, had cars (that’s another story), and had $$ parents who bought houses or rented apartments near school or club team so they could spend the weekends trekking for club.

This is very true, but this part was very clear to us upfront, the school/coaches had told us that while a lot of kids do participate in club/split season/out of school training this has to be managed and financed by family, even if school coach may assist in finding you team or connecting you to other players, so in this regard we knew what we were getting into. They also made it clear that you cannot get out of sports freshman year, by junior year you can do ‘strength training’ which are off season workouts for your sport with no Saturday commitment that make things easier. But to be fair, doing club sports in high school was very hard to manage even for my older dc who went to local prep school.
As for the cars on campus, that totally exploded for us during the pandemic as the health restrictions banned Ubers or any public transportation. So a bunch of local boarders brought their cars to campus, and when other kids saw it they followed suit. And the rule of boarders not being able to drive with other students also disappeared somehow, as long as parents signed off anything goes. I wonder if this lasts, I was the bad guy not letting my kid bring a car, we just continued to do the weekend schlepping ourselves. I am still not sure if the school actually approved the cars for boarders or have just been looking the other way.

As for the cars on campus, that totally exploded for us during the pandemic as the health restrictions banned Ubers or any public transportation. So a bunch of local boarders brought their cars to campus, and when other kids saw it they followed suit. And the rule of boarders not being able to drive with other students also disappeared somehow, as long as parents signed off anything goes. I wonder if this lasts, I was the bad guy not letting my kid bring a car, we just continued to do the weekend schlepping ourselves. I am still not sure if the school actually approved the cars for boarders or have just been looking the other way.

Yep. Car rules and enforcement are all over the place, and some parents (us) had to be the bad guys. We would literally read the school Handbook to other parents and they would ignore us. It’s a serious matter - schools are usually so worried about liability, but if/when a kid has a serious accident with other students in the car there will be hell to pay. It’s happened before.

Wait, what? Boarders had cars on campus and could drive them? That shocks me! If that was happening at Mercersburg I had no idea. Although it’s very rural so not much opportunity for meaningful club sports in the immediate area.

@UltimaCroix , we were bad guy parents too. I recall another parent telling me one reason she and sibs, and then her kids, went to BS was because "they aren’t driving around in cars together, drinking, and getting in awful accidents. "

Honestly, this was something that worried me even when DS was in college. Probably because my own experience made it quite clear that circumstances sometimes put one into positions they might never had imagined!

In this regard, I was very happy for NJ’s very restrictive laws for new drivers. PA, not so much!

The car thing we noticed even BEFORE Covid happened. Several athletes and non-athletes had cars on campus. Some athletes were given permission to have their cars (with official approval) so they could go to club practice and games. Check out your school policy on cars.

OK - call us naive (again), but we had no idea how many students were repeats and had already taken certain classes at their JBS, overseas school, or school back home….but were taking the same course again at BS

Wow! As a parent of a repeat at said school, there is absolutely no reason to do this that I can think of. There are sooooooo many interesting classes to choose from. Although, my kiddo repeated Junior year and already had fulfilled pretty much every requirement, so has been able to take advantage of the cool electives.

Some people on here do not like schools with largish day student populations, but IME it is a good way for the schools to bring in regular UMC kids who break up the divide between the very rich and the FA kids discuss above, and bring in the normal UMC suburban component.

Another thing that I wish I knew……this will probably get some discussion.

The car thing has been going on since at least the early 90s…I may or may not have participated in breaking this rule back in my day during Senior Spring.

At some schools there is less relationship-building (friendship) between girls and guys. Outside of set activities/EC’s, we found that there were few guys that had platonic friendships with girls.

This is interesting to me. I have no doubt there is a difference between schools, but I wonder how much of that the schools control or influence. How much is generational, and how much is a cultural difference between schools or geographic location, and how much of it depends on a kid’s particular subgroup. Throw into the equation how well are lgbtq+ kids are integrated into the social scene. And even whether different grades intermingle.

I have wondered about kiddo’s bs friend group, which seems to be about 50/50 girls/boys, with all kinds of people, different grades, sexual orientation, race, etc. But is that an anomaly at the school, or “just kids these days”? I had sorta thought it was the latter. Or is it more a California thing? Then again, I know there are all-girl and all-boy friend groups at the school, too.

It is interesting to me also that you observe there being less intermingling at DA now than back in the day. Does anyone know what the general trends are these days overall?

One of her complaints about social life is the hook up culture. She has shared that many girls (maybe boys too) feel pressure to hook up.

One of her complaints about social life is the hook up culture. She has shared that many girls (maybe boys too) feel pressure to hook up.

(Nodding head) That seems to be a universal trend, unfortunately. It was definitely there when I was in college way back when, but I don’t remember it so much in high school, and it’s there even younger now.

I’d say that largely depends on the circles you run in. My close friends are certainly very diverse, but mostly male—the Circle/Crescent separation here definitely has a lot of influence.

I also haven’t noticed a hookup culture, but that’s probably just because my really close friends and I are all huge nerds who probably wouldn’t be impacted by it much anyways. I’ve heard a lot of evidence to the contrary from others.

I think I remember someone else saying this, but I think one’s experience at boarding school, especially larger ones, depends significantly on what they seek out. I didn’t know that there was a drug scene on campus until someone from another school told me about it, for instance, and while everyone here talks about grade deflation, our conversations are more about inflation.

Guys & Gals didn’t just hook up or date…there were friendships without sexual benefits.

I believe “When Harry Met Sally” addressed this myth.

Just kidding. But there has always been a hook up culture. One’s perception just depended on whether they were participating or not. And it has always been relatively common for very good friends to have dated for a period of time, periodically (on and off) dated, or just hooked up once and filed that away as a one time awkward event. But to be clear, it was also common for guys and girls to be nothing more than friends (and I’m not sure that has changed either).

And for the record…I also file this under “What I never wanted to know about my kids business”…which isn’t a boarding school thing. It’s an anywhere thing.

Here is the difference from years gone by….the hook up culture today is most often mediated by emails, texts, and ordering up like Door Dash. I think (at least at our school) there were more friendships within the LGBTQ community and between certain teams. Big hook up culture at DA - can’t compare to other schools, but imagine it’s the same - at least with co-ed schools in the NE region. For those of you who deny big hook up cultures at HADES schools, that’s ok….have your Tubby Custard and go to bed.

This is not only “kids will be kids” or high school behavior. There is much less supervision at BS than at home (reality at most schools in the NE). There are dorms, crew houses, basements of buildings, Choate Day (yes - we all know who you are - shame on you for not attending the football game), the music practice rooms, etc. One of the big factors is age and accessibility. There are some school were there are PG’s age 19-20….and kids age 13 -14.

There are a lot of folks on here who are too young or too new to remember the “Owen Labrie” situation that provided topics for discussion on CC for a year (at least). It’s a good thing to know the lessons learned and what to know about.

Throw back to fun times at DA for one cute couple that made the news…. 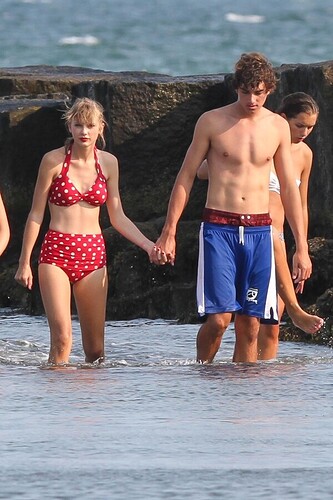 Taylor Swift made the journey out to western Massachusetts this weekend to visit her high school honey, Deerfield Academy junior Conor Kennedy, but there were no football games or school dances on …

Groton changed all the solid doors to windowed doors a year or two ago. Imagine the kids’ shock when they got back to school and their favorite hook up rooms now had see through windows in the doors.